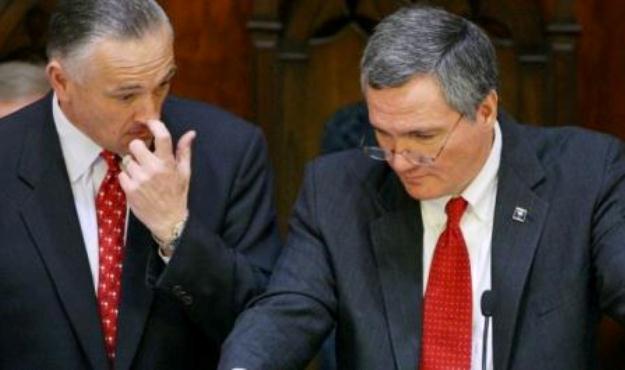 || By FITSNEWS || This website led the charge to take down former S.C. Speaker of the House Bobby Harrell. From 2012-2014 – in dozens of posts – we drove the debate that ultimately ended with Harrell pleading guilty to six ethics violations, resigning his office and receiving a three-year probationary sentence.

Since then, we’ve been offered multiple opportunities to take additional swipes at Harrell – including this week, when a S.C. House “Ethics” panel ruled that the former Speaker must cough up more than $113,000 in campaign funds he used to pay his attorneys.

Apparently Harrell’s use of campaign funds to pay his attorneys was improper – and he must now reimburse government for $113,000.

Forgive us for failing to see the relevance here …

Also, the last time we checked the S.C. House “Ethics” Committee has absolutely zero room to sit in judgment … on anyone.  These guys have turned looking the other way into a cottage industry in South Carolina.

They’re a joke … in fact this committee’s failure to do its job almost got Harrell off the hook for his campaign finance violations.  But now that he’s out of power its members all of a sudden want to look like tough guys dispensing “justice” to their former boss?

Look, we understand that the echo chamber media (a.k.a. The Nerve and editorial writer Cindi Ross Scoppe of The State newspaper) are all in a tizzy over this “breaking news,” but last time we checked Bobby Harrell was out of office … his political career in tatters.

Also, isn’t there plenty of corruption being perpetrated by sitting elected officials?  Shouldn’t that be our focus?

Harrell took none too kindly to the timing of the “Ethics” committee ruling.  In fact he blasted the committee’s chairman – S.C. Rep. Kenny Bingham – for his lack of transparency and for allegedly violating his (Harrell’s) due process rights.

Here’s the statement Harrell released to the media …

This afternoon, I was informed by the press that a South Carolina House Ethics Committee meeting was called by Kenny Bingham for this morning. He did this without informing me, or anyone on my behalf, that the meeting was taking place or that I was going to be a subject of the meeting. I am told the committee met and discussed my campaign disclosure reports. In that meeting, the committee accused me of violating campaign laws, decided that I had done so, and took action.

All of this was done without any notice to me of the meeting and without affording me the opportunity to be heard by the committee. This was a clear violation of my due process rights.

This action, instigated by Kenny Bingham, was caused to take place the day my daughter-in-law is being admitted to the hospital to give birth to my and Cathy’s first grandchild.

All of the issues discussed by the committee were included as subjects of last year’s investigation. I will be happy to discuss this with anyone after my granddaughter comes home from the hospital.

Bingham, of course, is the state lawmaker who is currently suing this website for libel.  He’s also the odds-on favorite to become the next Speaker of the S.C. House of Representatives – a job he might get sooner rather than later depending on how current S.C. Speaker Jay Lucas navigates the fallout from this summer’s contentious debate over the Confederate flag.

We’ll say it again … who cares.

Were Harrell still in office – pulling the strings of government hither and yon – we could see the relevance here.

But he’s not.  Nor is he ever going to be in that position again.

Which means this whole thing is for show …