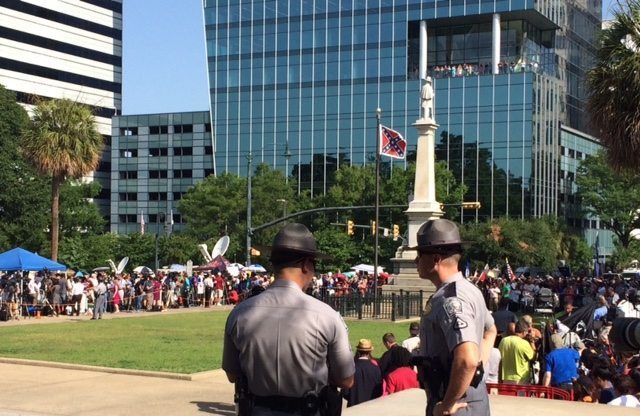 || By MICHAEL A. PITTS ||  South Carolina experienced a horrific tragedy and America’s media rushed in blithering for another Ferguson or Baltimore.  When the people of South Carolina did not respond accordingly, in came the race baiters; on (Jesse) Jackson, on (Al) Sharpton, to no avail!

Finally the radical racists arrived.  They snarled, glared and postured – but even the Black Panthers and Ku Klux Klan failed to incite.  The state with more Revolutionary War battle sites than any other, that fired the first shot of the Civil War, listed as friendliest and number one in patriotism, still did not comply.  The Heritage of Dixie showed what the pious and indignant across the country know nothing of – a proud state setting an example.

I submit that failure came with circumvention of process.   Immediately following the shooting, Governor Nikki Haley’s response to a question of the Confederate Battle Flag was appropriate. She said, ‘It has no bearing.’

Then the national media spotlight began to burn bright and she had an epiphany.  She tearfully demanded retribution on the perpetrator.  No, not Dylann Storm Roof, but a piece of cloth.  The S.C. Senate sprung into action and produced a bill – S. 897 – taking it straight to the floor.  This is the same Senate that produced little all year except a state budget.  Like a well-placed pass from a Super Bowl quarterback, they zipped S.897 across the lobby directly to the S.C. House.

Our chamber received it – and with parliamentary moves not used in my thirteen years as a member of the S.C. General Assembly, brought it straight to the floor for debate.  House leadership vacillated on what the next step would be, though, as many Republicans recalled their commitment to us that if S. 897 was placed in the Sine Die resolution (which governed debate during our extended summer session, and which we amended to include a debate over the flag), it would follow the proper committee process.

When this process was not followed, the voice of the public was not heard – nor did any vetting occur regarding the Senate proposal or alternative compromises.  A mass of external forces became the lone voice on the issue – leaving those of us whose job it is to be the voice of the people abandoned. Their voice was three lone senators facing the tsunami and a core of representatives willing to stand and fight.

The majority of South Carolinians feel betrayed by the failure in the process and not necessarily in the outcome.

South Carolina hosts the “First in the South” presidential primary.  Yet Republican presidential hopefuls feared questions on this issue.  The answer for them was simple, “it is a state issue, next question.” Our governor is now at the top of the Vice Presidential candidate list.  My question is, what if her endorsed candidate fails to win this crucial primary?

The State Senate lost a beloved colleague and deserves an extension of grace in this case.  But the House leadership took the hot potato with one final lap to run with one objective – tossing it away.   Our failure to engage in a meaningful debate on behalf of the people we represent became clear when I offered an amendment to replace the Confederate battle flag with our own state flag.

Supported by the speaker pro tempore, the assistant majority leader, the ways and means chairman, the judiciary chairman and the labor, commerce and industry committee chairman, an effort to table this amendment failed by a 60-60 vote.

This sent Governor Haley’s liaisons into a texting frenzy – while also sending to work the floor the majority leader and chief whip.

They flipped three votes – killing my amendment by a 63-57 margin.  This brought Jesse Jackson to his feet, cheering in our balcony.

The Governor immediately held a public signing following an awkward ceremony removing both the flag and the pole – all of which appeared to have been done according to a pre-set schedule.

I have questioned the larger agenda – the white-washing of Southern history.  Where are we now?  Battle flags bloom in yards, on houses, and flutter in the backs of convoys of pick-up trucks.  Retaliation of trespass, theft, and violence are occurring across the state. As graves are being disturbed and cemeteries desecrated, political correctness races across the nation in almost comical fashion, attempting to eliminate all things Southern.

The process of our government was designed to be slow for a reason.  When accelerated mistakes are generally the norm. I believe in this case, failure was in the process and not necessarily the outcome. I believe the manner in which this issue was resolved has not united our state but created a deeper division.  More importantly, I believe this division mirrors a nationwide rift created by the policies of President Barack Obama.