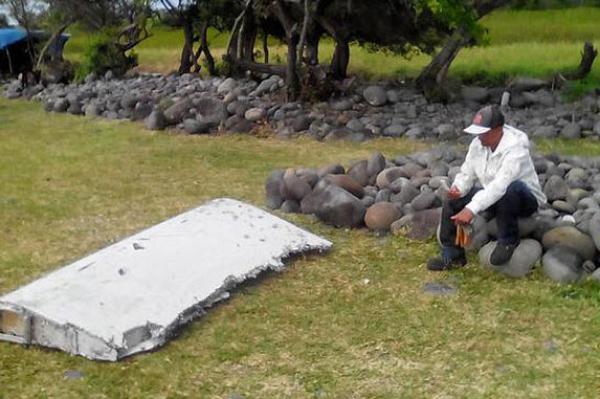 || By FITSNEWS || Wreckage appearing to belong to a Boeing 777 passenger jet has washed up on the shores of Réunion, a French island located in the Indian Ocean east of Madagascar.

The wing fragment – said to have been in the water for at least a year – could be the first anyone has seen of missing Malaysian Airlines flight 370 in nearly a year-and-a-half.

Flight 370 disappeared on March 8, 2014 with 239 souls aboard.  The plane was headed from Kuala Lumpur to Beijing when air traffic controllers lost contact with it over the South China Sea.  Military radar indicated the plane deviated from its planned flight path shortly after going silent- crossing the Malay peninsula and heading toward open water over the Indian Ocean.

Now a piece of the jetliner appears to have turned up more than 4,000 miles from where it was last seen … near the southern tip of Vietnam.

“I’ve been studying hundreds of photos and speaking to colleagues,” French aviation expert Xavier Tytelman told The (U.K.) Telegraph. “And we all think it is likely that the wing is that of a Boeing 777 – the same plane as MH370.”

The most popular (non-conspiracy) theory is that the plane had some sort of cockpit fire which compelled its pilots to attempt an emergency landing.

“The pilot did all the right things. He was confronted by some major event onboard that made him make an immediate turn to the closest, safest airport,” pilot Chris Goodfellow wrote shortly after the plane’s disappearance.   “What I think happened is the flight crew was overcome by smoke and the plane continued on the heading, probably on … (autopilot), until it ran out of fuel or the fire destroyed the control surfaces and it crashed. You will find it along that route–looking elsewhere is pointless.”

Numerous conspiracy theories have emerged, though – with some claiming the plane was destroyed by terrorists and others alleging it had been flown to North Korea.

A massive search was undertaken for the plane immediately after it went missing … in fact a multinational underwater hydro-acoustic search for wreckage was initiated last October.

In January, Malaysia’s government declared the plane a loss – and all its passengers and crew presumed dead.

Expropriation: Coming Soon To A “Democracy” Near You?