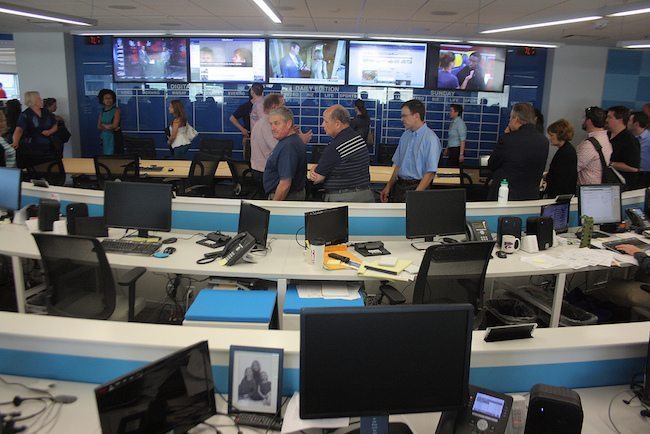 This has been the dynamic of the Donald Trump for president campaign … decried by the “Republican” establishment as a sideshow for “crazies,” yet clearly tapping into something far bigger than itself in terms of an American electorate fed up with the same old “bipartisansh*t.”

Eager to diminish those undercurrents, the liberal Des Moines Register got into the action this week – publishing an editorial calling on Trump to withdraw from the presidential race.

You know, even though he’s got a double-digit lead on the rest of the GOP field.

Here’s an excerpt from the paper’s screed …

In the five weeks since he announced his campaign to seek the GOP nomination for president, Trump has been more focused on promoting himself, and his brand, than in addressing the problems facing the nation. If he were merely a self-absorbed, B-list celebrity, his unchecked ego could be tolerated as a source of mild amusement. But he now wants to become president, which means that he aspires to be the leader of the free world and the keeper of our nuclear launch codes.

That is problematic, because Trump, by every indication, seems wholly unqualified to sit in the White House. If he had not already disqualified himself through his attempts to demonize immigrants as rapists and drug dealers, he certainly did so by questioning the war record of John McCain, the Republican senator from Arizona.

First of all, John McCain is a miserable excuse for an elected official.  Aside from being an unrepentant fiscal liberal and suppressor of free speech, he’s the chief architect of a boneheaded interventionist foreign policy which has killed at least 7,000 Americans, cost taxpayers trillions of dollars and made the United States exceedingly vulnerable to the threat of an enemy of its own making.

But as for the bigger allegation – that Trump is somehow unfit for office because he lacks a filter – that’s precisely the sort of ridiculous conclusion that comes from being panicked.

“Officially the Register’s position was simply in escalation to the furor over the real estate magnate’s weekend comments about Sen. John McCain’s service during the Vietnam War,” the website Zero Hedge noted.  “Unofficially, it is called throwing everything at the wall and hoping something sticks.”

That’s what the two-party establishment is doing to Trump right now … throwing everything it can against him.  The goal?  Reestablishing the same old bland, scripted political debate in which their tired talking points and recycled “solutions” can be parroted and re-parroted by the same old talking heads.

To what end?  So American can get deeper in debt, weaker at its borders, more deprived in its people’s liberties and more sluggish in its economic growth?

Of course the two-party establishment wants Trump to drop out.  He’s thumbing his nose at them.  And sucking up political oxygen that’s typically reserved for their status quo mouthpieces.

In other words they want to return to a campaign they can control.

Where Are They Now? Taking Arrows (Literally)