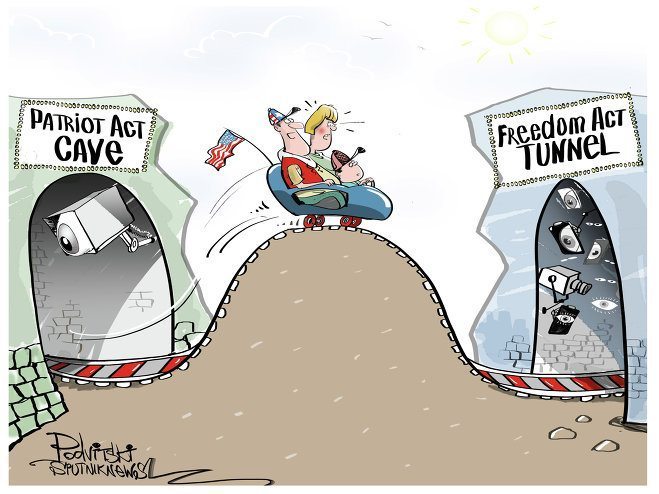 THE SURVEILLANCE STATE … UNDER ANOTHER NAME

|| By FITSNEWS || The stampede over your liberty will continue unabated … even though the federal government claims to have ended its “bulk data collection” under the so-called PATRIOT Act.

That’s because our Evil Empire has passed the so-called “USA Freedom Act,” which restores the powers which lapsed at midnight on Sunday thanks to the efforts of U.S. Senator Rand Paul of Kentucky.

“The government after this bill passes will no longer collect your phone records,” Paul said this week.

What the “USA Freedom Act” does is give the federal government six more months to snoop on you in flagrant violation of your Fourth Amendment protection against unreasonable searches and seizures.

After those six months are up, your phone records and other data will continue to be collected by telecommunications companies – available to the government after the issuance of a warrant.

“While on the surface this appears to be a victory, we rather skeptically suggest it merely changes the place where the bulk data is stored … and even more cynically leaves the data access less open to FOIA requests as it is now private property (not government),” wrote Zero Hedge.  “Realistically it appears nothing more than a great PR effort to bury the spy state even deeper.”

And as evidence of the utter insignificance of all this, the government has absolutely no plans to do away with its mass storage center in Utah (a.k.a. the “all-seeing eye“).

The government’s Orwellian domestic spy network – which was found unconstitutional earlier this year – was courageously exposed in 2013 by former National Security Agency (NSA) employee Edward Snowden.  The whistleblower continues to fight for individual liberty, promoting the use of encryption technology in an effort to limit government’s ability to snoop.

For those of you keeping score at home, here’s the “USA Freedom Act” roll call …

Schachte: From War To Peace Through Energy