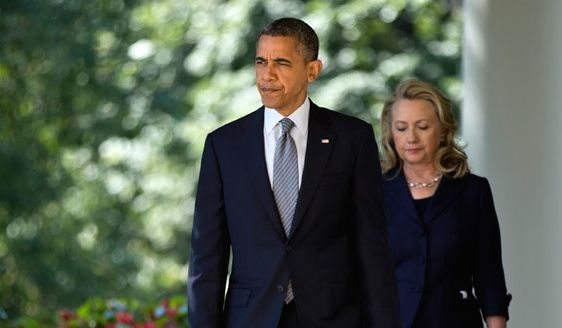 || By FITSNEWS || Over the weekend, U.S. president Barack Obama told CBS he learned of former Secretary of State Hillary Clinton‘s controversial private email address “the same time everybody else learned about it, through news reports.”

One small problem with that story, though …

Turns out Obama not only knew about the address, he repeatedly used it to correspond with Clinton.

“The president, as I think many people expected, did over the course of his first several years in office trade emails with his secretary of state,” White House spokesman Josh Earnest admitted this week.  “I would not describe the number of emails as large, but they did have occasion to email each other.”

Earnest also claimed he “assumed” Obama knew Clinton’s private email address – but added the president “was not aware of the details of how that email address and that serve had been set up or how Secretary Clinton and her team were planning to comply with the Federal Records Act.”

According to a 2009 regulation from the National Archives and Records Administration (NARA), officials using personal accounts are required to preserve a record of any public business done on those accounts. Clinton didn’t do that … and not only that, she appears to have repeatedly used her private email address to evade Freedom of Information Act (FOIA) requests from media outlets and advocacy groups.

Obama is not familiar with anything until it is exposed. He lives in a fantasy world.

It does not matter.. …because of the media, these MoFos are untouchable…

Not a D*#n thing will happen to any of them, unless they figure out what I told them about Hillary, and the Democrat Party and Obama want Hillary gone…

The media kisses the @$$ of liberals…it subverts democracy. And until they COMPLETELY CRASH American society…people are not going to notice enough to revolt. It will happen at some point..and Corrupt B*$t@rd$ like FITS will be some of the first on the chopping block…

Rage is one thing…but pent up, over due rage will be brutal to the SOBs perpetuating the Bull-$#!t all this time…

Yeah, I know…Dumb@$$#$ like you need the government to control you…LMAO…

Get off your ass, get a job and stop collecting public benefits you worthless taker. I’m tired of paying for your ass to sit around and bitch all day.

Too ignorant to think much???

To lazy to work much?

Just like Ohaley, cannot believe anything either say.
If their lips are moving, if they are writing, or in any fashion making a statement, they are lying!
Two lying,feckless idiots!

My outlook displays a name, say Obama, Barry – it doesnt show if that email address is Barry.Obama@whitehouse.gov or if it’s Grand.Tango@crapville.net. It just shows the name. Of course at least he knows how to use email – unlike Lindsey.

That is only because the address has been added to your address book.

So… anyone who emailed Hilary Clinton during her tenure as Sec of State is “implicated in the scandal”? How many members of Congress emailed the Secretary of State? Isn’t it true that Clinton was legally allowed to use her personal email address and was in compliance with the law at all times – you don’t seem to mention that in your story. She hasn’t been accused of destroying her emails, why are you suggesting that she did? This article looks like you misread a national news story and then repeated the parts you made up when you wrote your own. FITS News is one of the best read blogs in SC; it would be nice if the Editor appreciated the platform he has earned and been given, and use it to report factually accurate news stories.

You should not use “FITS News” and “factually accurate” in the same sentence.

You must not come her much. This sight is almost as biased and unreliable as the Fake News Network, if that is possible. This is the right wing talking point du jour. Talking points originate on Fake New and then disseminate out to the other wingnut media sources, like this one.

This is a Republican blog. Its is It is wholly biased.

You don’t believe him?

You must not come here much yourself…FITS is hardly a Republican blog (unless Will’s *really* into self-loathing). FITS only digs you if your milliner works primarily in tin-foil. He obsessively puts the term Republican in quotes, and states on an almost daily basis that no real difference in the two parties exists- that there is only the FITS-centric universe of small-L libertarianism and the Orwellian, Military-Industrial Complex “establishment.” Makes for interesting reading and debate, though, no?

Just when it looked like the MSM might be ready to deliver the coup de grace to Hillary’s candidacy…. If anything could get them to back off, it would be the possibility that Barry was complicit in the whole affair.

Talk about getting caught lying red-handed. I manage to get a copy of one of Obama’s emails to Hillary.

I have impeccable sources.

I will give the Clinton Machine creativity points. Drag Obama in, make the story about him and call anyone who mentions HRC emails a racist.

E mail shme-mail. Who cares? We are talkin’ about Democrats here…deceptive behavior is the norm…how about all those illegal criminals that are reportedly being readied to receive social security benefits? New illiterate and unskilled , criminal voters… perfect for the Democrat Party…

The majority of Americans want that fucked up son of a bitch to hang by a rope, I tell you. Fuck him, fuck Hillary, Fuck McCain, Fuck Grahamnesty, Fuck Harry Reid, Fuck Nancy Piglosi, Fuck John Bonehead, Fuck James Clyburn, and Fuck Mitch McConnell, et al. They are all douche bags lying thieves – like Nikki Haleybop.

Here let simplify that for you.

“The majority of us racist rednecks want that fucked up son of a bitch to hang by a rope. SAE forever.

There now isn’t that better.

“We knew as of last summer that the Secretary used a private email account. This is not something new. We knew she was cooperating. She was giving us everything that we asked for. Nothing changed except the pressure on the Republican members of the committee this week became too great for them to resist from the Stop Hiller Pac and the RNC people. So they issue a subpoena for records we already have. The Secretary has called for those records to be made public. Why isn’t the chairman doing that? The reason is we have read them and there is nothing in them.”.

So just more Fake New/ GOP crap. When will the GOP produce the Bush/Rove emails that were supposedly deleted from the RNC servers?

Which part do you contend is a lie.

You told the lies. And willfully and knowingly, I might add. You tell us.

Ok I get it GT. Fact are confusing I will move on. You can look the quote up on your time.

They all knew exactly what they were doing. It was intentional evasiveness.

They continue to snub there noses at American citizen’s.

Will Hilary Clinton be offered Immunity to testify before Congress charging Obama lied about Benghazi video cover up and arms given to terror groups in Libya to over throw government of Kadaffi?