By Liz Gunn || I am going to start by completely contradicting myself. I love New Year’s Eve. Any holiday that involves champagne, fireworks and kissing can’t be all bad. It’s also a great excuse for a party, and well, I like planning parties.

New Year’s Day is also pretty high on my list of holidays I enjoy. Food, football and lots of naps are usually on my agenda. I rarely get out of my pajamas before noon, if at all.

I love the traditions of a New Year’s Eve and Day celebration. Watching Dick Clark’s New Year’s Rockin’ Eve (now hosted by Ryan Seacrest), at least in part, counting down to midnight and sharing a kiss to ring in the new year. On New Year’s Day in the South, it’s all about what you eat…and football.

Most southerners eat greens, usually collards, for financial fortune.  We eat pork, sometimes in more than one form, for prosperity. And we eat black eyed peas, in the form of Hoppin’ John, for good luck. Some people eat one pea for every day of the new year, but I don’t take it that far. The story is that black-eyed peas were first discovered during the Civil War when resources were extremely limited and they kept some families alive, consequently being seen thereafter as lucky.

Throw in some cornbread and you’ve got yourself one fine meal to start the year. I don’t really buy into all the folklore, I just like the food. I’ve eaten the same meal for more than 30 years now, and like most people some years have been better than others. I’m still here though and that seems pretty lucky to me, so I won’t chance it.

When you think about it, a “new” year is a strange thing to celebrate. Time doesn’t stop and begin again, of course, we just turn the page and start writing 2015 in place of 2014. Time is perpetual.

The only reason the so-called new year begins in the middle of the winter season is because the Catholic church adjusted the calendar in 1582 to make sure that Easter always lands in the spring. Am I the only one who thinks it would make more since if the new year coincided with the first day of a season? Maybe so, since no one has challenged it in more than 400 years. I digress.

Alas, people do use the dawn of a new year as a time to hit the reset button and begin again – myself included. I don’t believe in New Year’s resolutions, but I do think about what went right and what went wrong in the last 12 months, and how I can make the next 12 better.

My thoughts about making changes in the new year are usually very general like, “get organized” or “spend less”. Experts will tell you this is a bad plan. If you are going to make real resolutions, make them as specific as possible. You’ll have a much better chance at keeping them.

My wish for all of you, and I mean this with the utmost sincerity, is that you make next year better than the last. For yourself and for those around you. Cheers!

**Also, here is a New Year’s Eve and New Year’s Day college football schedule for those who are interested. (EST) 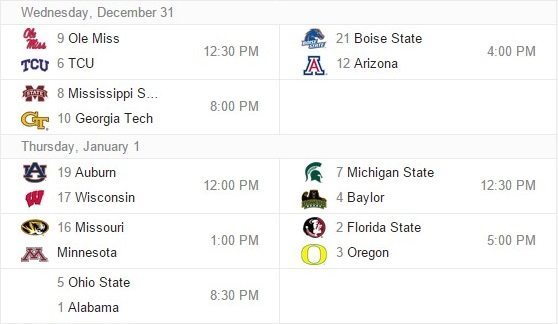