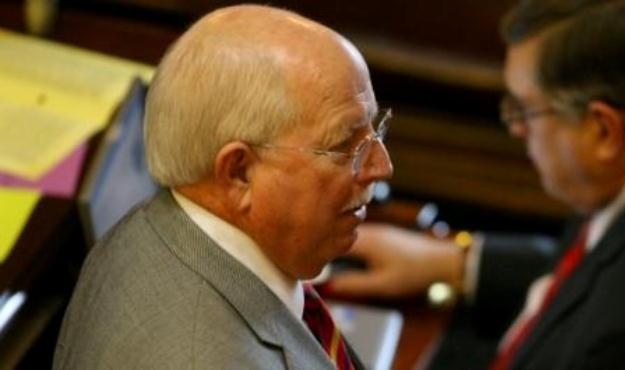 By FITSNEWS || One of the most liberal, self-serving and vindictive “Republican” politicians in South Carolina is Rep. Bill Sandifer of rural Oconee County.  Seriously … this guy has the thinnest skin, biggest ego and shortest temper of any lawmaker in Columbia, which is saying something if you’ve spent any time around the S.C. State House.

“We raise the money ways and means spends,” Sandifer said this week – and he’s correct.

That’s why S.C. Gov. Nikki Haley ran against Sandifer for this post unsuccessfully prior to deciding to run for governor.

Imagine how different things would be if she’d won?

Anyway, along with ways and means chairman Brian White, Sandifer is rumored to be one of the targets of an ongoing federal-state investigation into corruption at the S.C. State House.  He’s also recently come under fire for questionable campaign spending … which is funny considering Sandifer nearly died on a 2010 taxpayer-funded junket to Panama after reportedly being struck on the head by a mysterious female companion.  Missed that story?  It’s the stuff of Palmetto political legend.

This week, Sandifer suffered another indignity when his leadership as LCI chairman was challenged.  While this might not seem like a big deal, it is.  A very big deal, actually.  In state government, decisions regarding who leads key committees are almost always made behind closed doors – and for a sitting chairman to be challenged in public is a sign of tremendous disrespect.

More to the point, it forces lawmakers to go on the record stating their preference – which they hate doing.

This website is no fan of either lawmaker, but Ballentine would have likely made a more fiscally conservative chairman.  That’s why six of the LCI committee’s twelve “Republicans” voted for him.  Six other “Republicans” – including fiscal liberals Heather Ammons Crawford, Mike Forrester and Mike Gambrell – voted for Sandifer.  Oh, and all five Democrats on the committee voted for Sandifer, too.

The vote and its aftermath were recorded by the S.C. Policy Council …

There’s nothing on that clip that’s sexy …

It gets a little testy around the 10:00 minute mark, but Sandifer – albeit visibly displeased at having his authority questioned – goes out of his way to appear far more magnanimous than he actually is.

The most pointed moment occurred when Sandifer exchanged a few words with S.C. Rep. Ralph Norman – an ally of Haley’s who nominated Ballentine for the post.

“I think it’s telling the fact that you walk in the door for the first time as a member and make a nomination,” Sandifer said to Norman after the voting.

“I’m proud of that and I will do it again,” Norman replied.

Norman also vowed that Sandifer’s opponents on the committee – including Reps. Eric Bedingfield, Dan Hamilton and Deborah Long – would be “very direct” in the coming months in terms of advancing their issues.

The people that you call “Rebublicans”, Will, are, in fact, Republicans. It’s a party affiliation. They are what they are.

You and I may think they are shitty Republicans. We’re usually agreed on that. But the fact is, there has never been a time when absolute fiscal conservatives, as opposed to big-spending neocon war profiteers, fascistic theocrats, tea party freaks, etc., ran the show. Not even Saint Ronald filled that bill, truth be told.

There is not likely to be a revolution that will sweep the libertarians of the party into roles of leadership either. Your idealism is admirable. It really is. But these are the Republicans we’ve got, and even the fed broom will not make them go away.

Sadly I must agree with you.

Pretty much my point all these months.

Sure he might not “like” some of these Republicans but they are just as much a Republican as,well,

Ummm….no it’s not. Nothing gov’t does has anything to do with “free enterprise”, that especially means voting, nominating, etc.

Another” Demublican,” who has accumulated far too much power.

kind of like the vote you cast for Brad Hutto?

Let’s find out what the FBI has to say. They are all over everyone in the SC House.

Ok – the fricking indictment rumors need to be addressed. I wish the FITs readers would share what rumors they have heard and what lawmakers, lobbyists, and executive level officials are being targeted. Are any Richland County or Columbia officials targets?

It’s sad that S.C. House Democrats act like little lapdogs clinging to the alpha male and hoping for an occasional table scrap.

SC Policy Council=Useless as Tits on a Boar Hog