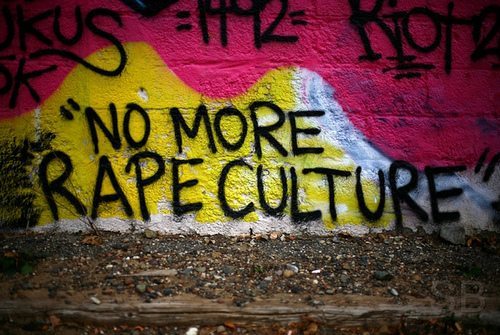 I’M NOT SAYING THESE WOMEN ARE MAKING IT UP, BUT …

By TAYLOR BROWN || If you are a woman, chances are, you were told, as I was, that your right to say “yes” or “no” to sex is absolute.  I hope, if you are a man, that your parents told you to never have sex with a woman if she is giving you anything less than her consent.  Sex can, and should, be one of the most incredible experiences of your life when both parties are enthusiastically saying “yes.”

When this consent is taken away (either with a “no,” or if the other individual (man or woman) is incapable of saying “yes”) this is rape.  Rape is rape is rape.

There’s no grey area.  It is black and white.  Night and day.  Yes (or roofied, passed out from alcohol, or any other situation you can possibly think of that would make the opposite party unresponsive) and no.

We have become so desensitized to the idea of rape from SVU and other TV shows or movies, video games, music, etc. but one cannot blame a person’s action on “society;” or “societal pressure;” or “boys will be boys;” or “I thought she wanted it.”

And you DEFINITELY cannot blame the victim.

Sadly, the courts grant the alleged rapist with more respect than many people out there treat the victims.  The accused is innocent until proven guilty, yet this concept doesn’t seem to hold true for the one who wasn’t given a chance to say yes, or said no and was forced against their will to have non-consensual sex.  That is to say, shouldn’t the victim be believed until there’s a reason not to believe the allegations?

Whether it’s the latest allegations against Bill Cosby, a star FSU football player, a group of Steubenville High School students, Ben Roethlisberger, Woody Allen, or a myriad of others—people seem to automatically place the blame on the victims.  THIS is exactly one of the many reasons a rape victim may not come forward to report the crime – because they are afraid people won’t believe their story.

If you type in “Bill Cosby + rape” into the Twitter search bar, you’ll find people who have slammed the alleged victims or, even worse, praised the alleged acts of rape.  Yet, it was shockingly somehow worse when “#RapeCultureIsWhen” was trending.

I have a collection of screenshots of tweets that say things like #RapeCultureIsWhen “a guy buys a girl food and she doesn’t put out,” “rape culture is delusional,” “white women have to look for a reason to be oppressed,” “a hashtag [started by] feminists that are too ugly to be raped anyway LOL,” among many others.  ARE YOU F*CKING KIDDING ME?!   These people are giving more respect to the rapist than to the victim?!  Christ!  Then they turn around and ask why the victim didn’t report it?!

Between the victim-blaming, talking to countless police officers (who often times ask “what were you wearing?” or “do you just regret your choice to sleep with him?”), the rape exam they perform on the victim, it is, let me tell you from personal experience,  just like being raped all over again.

My story isn’t different or special than anything other than what countless other women have been through or shared.  But perhaps because my story isn’t special you’ll realize that what you say or do to women who have gone through this (whether via the comment section below, or on Twitter, or in person, etc.) does make a difference.

I’ve seen some tweets and heard some things from supposed “friends” that made me question whether telling my story was worth it.  Many people who I follow on Twitter seem to believe that if you don’t report it, you’re not a victim.  This is bullsh*t.  A woman didn’t have a choice in being raped, but she does – whether or not you agree with it – have the choice of whether or not to report it.  She has the choice – whether an hour, a day, a week, a month, a year, a decade or more – to report it or to share her story.

Please let me be clear in this: I’m not saying the women who have accused Bill Cosby of rape are telling the truth, but I’m saying I won’t “slut shame” them, and neither should you.

No one actually knows the number of false rape accusations, but those women should be ashamed of themselves.  They are making it harder for victims to come forward and to be trusted.  But even if these women are making these claims up, by putting the burden of proof on them, you’re making it easier on the alleged rapist.

What do you personally think rape is?  Do you think saying “We are being raped by this opposing team / test / work meeting / hangover / xyz” is funny?  If the victim was drunk does that make you feel more or less upset than if she was sober?  What if she had slept with other guys?  How does that make you feel?  Do you believe her more or less?  What if she was a virgin?  Do you feel more or less sympathy?  What if you admired her alleged rapist?  Or knew him?  What characteristics do you think would strong-arm someone into having sex if they had previously said no?  (Hint: five no’s and a forced yes is legally still a no).  Does it matter if the victim had previously slept with her attacker?  What if she was attacked by a stranger?  What if she knew her attacker and went to see him, on her own free will—not wanting sex? Rape is rape.  The specifics don’t matter.  A woman was violated.

Does a woman really need to have her house broken into by strangers in masks and be beaten up or murdered for it to be rape?  Stop making these women jump through all of these hoops to have your trust.  Maybe then she’ll feel comfortable enough to go to the police after she is raped.  She’s already going through enough without your judgment or accusations thrown at her.

Trust me when I say this, NO WOMAN WANTS TO BE RAPED.

I have spent days trying to decide if I’m ready for any Joe Schmo off the street to know my most traumatic experience.  I feel like I’m going to be judged or looked at differently or like I’ve got too much baggage or I’m damaged after making this so public, but it was my choice.  I was lucky, and I had more supportive people in my life than I did detractors.  Now imagine how women feel that were raped by people in positions of power or in the public spotlight.

Assuming these women are telling the truth, they’ve been battling their demons and feelings of guilt for long enough.  Stop being just another cross they have to bear.  Stop being one of those reasons women don’t come forward.  If you’ve been in her situation, show some sympathy. If you haven’t been raped, show some f*cking empathy.

Ferguson Attorney: “The Process Should Be Indicted”