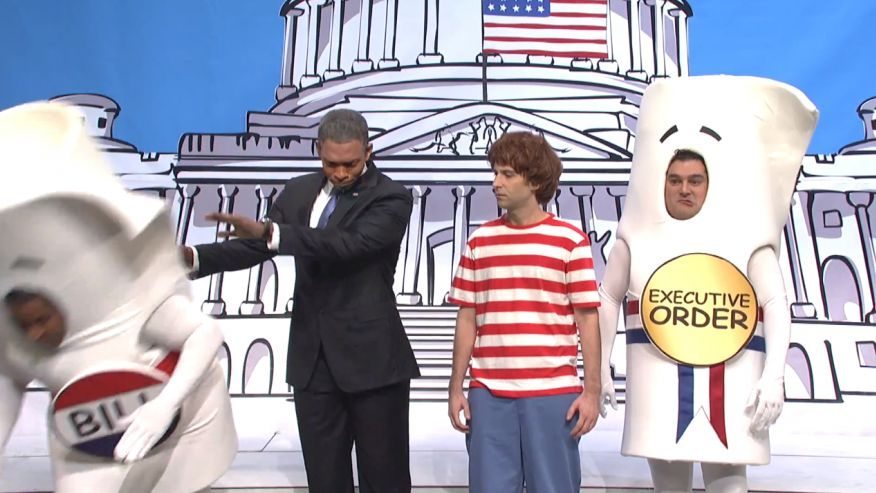 BARACK OBAMA VERSUS “A BILL”

By FITSNEWS || Saturday Night Live (SNL) hasn’t been doing much political content lately, but it get back into the game in a big way with last weekend’s opening skit.

In response to U.S. president Barack Obama‘s dubiously legal executive orders on immigration, the long-running live comedy show spoofed the famous “I’m Just A Bill” song from decades ago – portraying Obama as a bully who violently suppresses legislation and uses executive action to get things done.

The hilarious skit was a parody of Schoolhouse Rock! , the hit ABC show green-lighted in the early 1970s by future Disney CEO Michael Eisner.  For those of you keeping score at home, “I’m Just A Bill” was originally recorded for the U.S. bicentennial back in 1976 – when the national debt was $620 billion dollars and there were only around one million illegal aliens in the country.

How things have changed …

In the SNL skit Obama (portrayed by Jay Pharoah) repeated shoves “Bill” (portrayed by Kenan Thompson) down the steps of the U.S. Capitol as he explains to a young student that executive orders are how things get done in Washington, D.C. these days.

Of course even Obama’s trusted executive order (portrayed by Bobby Moynihan) is shocked to discover that he’s no longer being used to declare holidays or create new parks – but instead to “grant legal status to five million undocumented immigrants.”

In case you missed it, here’s the clip …

Long a tool of the far left, the SNL skit drew rare praise from the far right.

The skit also prompted the left-leaning Washington Post  to run “fact check” within hours of it airing – a highly reactive article which insisted Obama was “drawing a careful line” by “protecting the parents of citizens and permanent residents – people who could conceivably have a right to become citizens in the future given they are the family of lawful permanent residents or citizens.”

Social media recoiled at the obvious sop to the White House.

“Protecting (the) president from being mocked is not journalism,” conservative activist Elaine Hays tweeted.

Other Twitter users began mocking other SNL skits that did not receive a “fact check” from the paper.

Beautiful … not only was Obama mocked, but so was the liberal press corps that rushed in to defend him from ridicule.

Oh, for those of you hankering for a look at the original Schoolhouse Rock! clip, here you go …