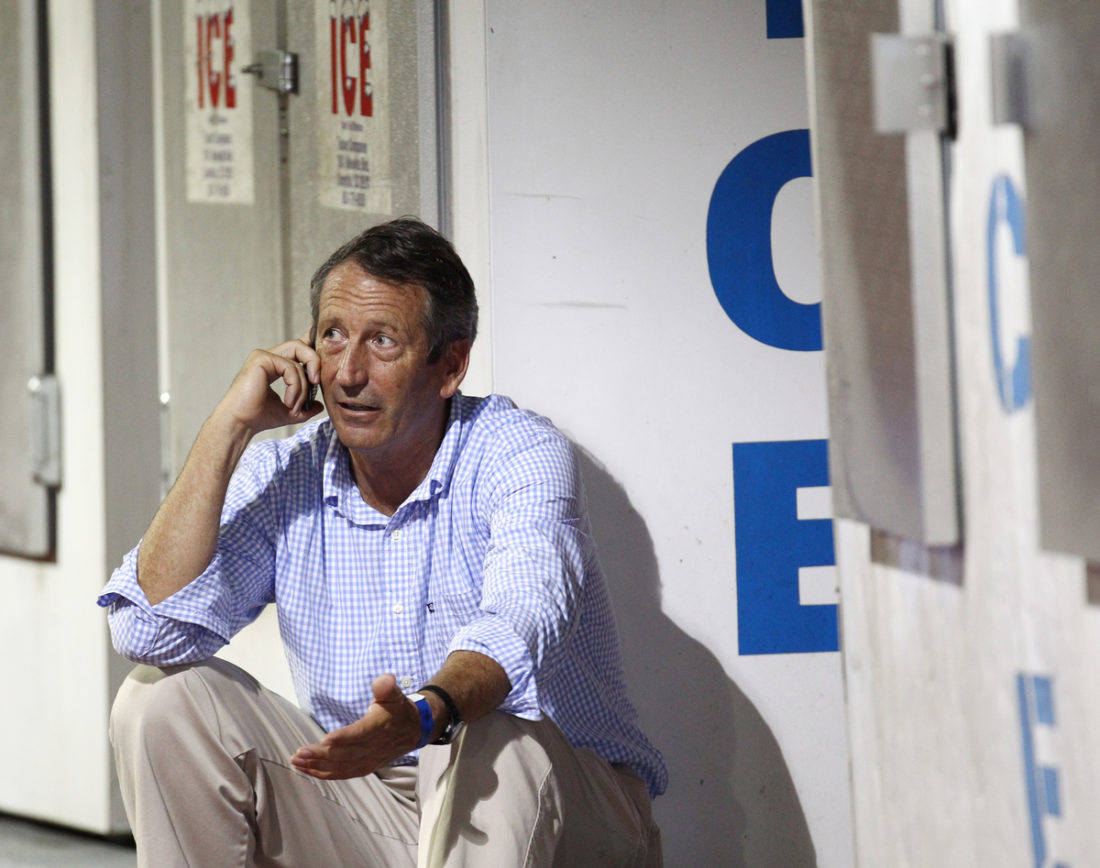 IS THE “LUV GOV” VULNERABLE?

By FITSNEWS  ||  After winning a grueling special election in 2013, U.S. Rep. Mark Sanford won 93.4 percent of the vote this November to claim a full two-year term in the U.S. House of Representatives.

The former two-term South Carolina governor – who saw his 2012 presidential aspirations derailed by scandal – completed a remarkable political comeback last May, winning the special election for the congressional seat he held from 1995-2001.

Sanford scored another win when he drew neither primary nor general election opposition this November (not even a third-party challenge).  In other words he was a lock to head back to Washington, D.C. in January 2015.

Eh … maybe not.  A closer look at Sanford’s 2014 win reveals a potential problem for the “Luv Gov” – and not just the ethical issues associated with his 2010 collaboration with former ally (now nemesis) Nikki Haley.

A total of 8,423 voters wrote in a name other than Sanford on their 2014 ballots this month – or 6.59 percent of the electorate.  This concentration of write-in votes was especially high in Charleston County, where nearly 10 percent of voters wrote in someone other than Sanford.  While write-in voting is typically higher in races where a major party candidate is running unopposed, Sanford’s write-in opposition dwarfed the percentages put up against unopposed GOP candidates at the statewide level – Treasurer Curtis Loftis (1.25 percent) and Adjutant General Bob Livingston (1.03 percent).

What gives?  Well, let’s start with the obvious …

Two months ago, Sanford reminded voters of why they don’t like him – a widely publicized personal implosion that highlighted his chronic narcissism and questionable mental health.  Not only that Sanford’s breakup with former fiancee Maria Belen Chapur – the woman he famously referred to as his “soul mate” when he was caught cheating with her in 2009 – also struck many as evidence of a diabolical degree of political calculation on his part.

Seriously … voters were willing to forgive Sanford for cheating on his wife so long as they believed it was for “true love.”  But when Chapur got kicked to the curb via a nauseatingly introspective 2,400-word Facebook post, well … their patience with Sanford grew thin.  Again.

Things got even worse for Sanford when rumors circulated that another “other woman” – specifically the wife of a wealthy Savannah, Georgia businessman – was to blame for the breakup.

A Lowcountry political operative told FITS Sanford’s electoral prospects have been harmed by his latest implosion – and the elevated level of write-in opposition is evidence of his weakened position.

“People who gave him a second chance feel let down,” the operative told FITS, adding that a credible, well-funded candidate could give Sanford a “run for his money” in 2016.

The operative added that Sanford’s problems would be compounded if this credible, well-funded opponent were a woman.

Many establishment “Republicans” (and limited government backers) are jointly pushing precisely such a candidate – S.C. Department of Health and Environmental Control (SCDHEC) director Catherine Templeton.  It’s not clear if the former Lowcountry lawyer is interested in running for Congress (some say she has her eye on the Governor’s Mansion in 2018), but it is clear she would be a formidable opponent in the event she jumped into the race.

“Voters have short memories,” the operative told us – adding that Sanford still excels in fundraising and retail politics.

Additionally the governor – despite his many personal problems – continues to occupy a position on the right flank of the GOP’s shrinking ideological spectrum when it comes to freedom and free markets.  That’s solid gold real estate based on the emerging ideological direction of the country.

Working against Sanford?  Himself.

“If he locks himself in his office and somebody handcuffs themselves to him – and chaperones him to the floor to vote – then the (first district seat) is his for life,” one of Sanford’s D.C. colleagues told FITS bluntly.  “But we all know Mark isn’t going to do that.  He can’t help himself.”

But if he wants to hang onto his congressional seat – and the slim chance he could elevate his comeback to another level – he had better learn to take a firmer grip on himself.

Gay Marriage: When Will SC Surrender?

LMAO….”Write in” against Sanford got more votes than Ravenel or Ervin, and they likely paid FITS thousands to “Consult” for them….Hahahaha…..

@Start ea­rni­ng ex­tra in­co­me wi­th online work from home… Make extra $5000 every month by working for a few hours a day. You’ll need an internet connection and USA,CANADA,UK,AUSTRALIA or NEW ZEALAND residency and you are ready to start… You’ll get paid weekly…

What if I don’t have an internet connection?

Just bum off the neighbor’s WiFi.

Tim,
Sorry to break it to you but GT already earns extra income at home.

Who knew ISIS was recruiting suicide bombers on Fits?

Higher percentage, but not more votes.

Don’t be racist with all that hard math. We only expect a common core approximation. Wait, that word is racist… I meant guess.
Next thing you know you’ll be expecting us to know the difference between median and average.
No one cares about Sanford, or his seat, that’s fairly obvious.

YOU try to explain the differences between mean, median and mode to Tango. That’s waaaay above TBG’s paygrade.

No worries Dan. Fits will put up another story about perverted gay marriage and get ya’ll excited later today.

You seem to be the one stuck on gay marriage.

Well, it’s true, isn’t it? You’re the one bringing it up in unrelated posts.

“Well, it’s true, isn’t it?”
It is always the holier-than-thou ones that are obsessed with and rail against homosexuality that are the biggest perverts.

That’s one of the best aspects of the whole Gay marriage issue.

Watching it drive a Right Wing nut like this crazy!

Isn’t that the truth! Out of nowhere comes this little goober and right off the bat he gets all sanctimonious.

The guy is batshit crazy.

There are always tons of write in votes, particularly when the is a single unopposed candidate. I personally write in two three names every election when I either don’t like any of the candidates or have a problem with who ever’s running unopposed.

Sanford owns that SC1 house seat. He can’t be defeated. How is it possible (outside of GT,Bible Thumper,Rouge and a couple of others) that Fits has managed to attract a group of contributors that couldn’t back a winning political candidate if you told em the final vote count a day before the election?

I do find it a bit ironic that someone who speaks of Sanford’s “questionable mental health” has a much publicized CDV on their record, and continually speaks of an (alleged)self reported, conspicuous (during campaign season no less) tryst with our current governor, as well as at any available chance reminding everyone of his other past sexual conquests.

Who is it that’s crazy?

6.59 plus the ex-wife. Ain’t looking too good for Mark.. Hang on Thomas, two years and your playmate will be back on the farm.

‘a widely publicized personal implosion that highlighted his chronic narcissism and questionable mental health.’
Seriously? Did he have sex with “that woman” and soiled her blue dress?

Yeah, so what? Heterosexual, good looking … He could even be a democrat and still get away with it …

“Heterosexual, good looking ”
Get a room!

If Templeton is interested in either Gov or 1st District Congress, how is she going to carry out either office from her Charleston home or has she planning on the applicable capital relocating to her?

With place has the closest liquor store?

Only in FITS and Templeton’s minds is she a viable candidate and Mark’s vulnerable. Good luck with that. This post is laughable.

Who is the new love in Mark’s life? Or did he reconnect with the Argentine secretly after the election?

Meeting in secret is their specialty… heightens the excitement! Things had gotten a bit mundane. Plus now there is the specter of another, other woman. Time for the “pick me” dance, er tango. Wonder what is left in Chapter’s arsenal?

Fuck a bunch of Mark “Shirker” Sanfraud is what I say!!!!!

“’Voters have short memories,’ the operative told us – adding that Sanford still excels in fundraising and retail politics.”
Is the “operative” suggesting Sanford will benefit from the stupidity of the American voter????? (As if he hasn’t already?)

Sanford is a lying,cheating,POS…….in other words, a SC voter’s wet dream.

Has anyone bothered to notice that the judge in the Sanford case saw no merit to Jenny Sanford’s goofy requests for a guardian ad litem to protect her 16 year old’s innocence, a psychiatric evaluation of her former husband, or an intervention for her ex’s supposed abuse of “drugs”.. what? antacids? Hers was one of the oldest tricks in the book (of unscrupulous lawyers) of smearing someone without actually accusing him.. I’m glad she was rebuked.

Where’s the story on this?

Guardian ad Litem would have removed Jenny from any contact with Sanford. Highly desirable. Her request for psych eval unfounded? We all know the answer to that…. Judge probably acknowledged the counseling and treatment he was already getting from the C-Street gurus. Excessive use of alcohol/abuse of drugs- standard admonishment that applied to both parents as custodians of a minor.bite

Fits I don’t think your going to be happy until you get Mark, Nikki, and Maria into a hotel room and just have yourself an all-nighter. Don’t forget to invite Jenny so you can snap a leg off to pick your with.

This is who T-Rav should have run against.

I did the same when Joe Wilson ran unopposed two years ago. He got something like 96% of the vote. Joe’s not a leader; he’s a follower. He follows whatever trend will get him elected again.

I think Sanford is Aspergery, and is never going to exhibit the social/personal skills of other politicians.