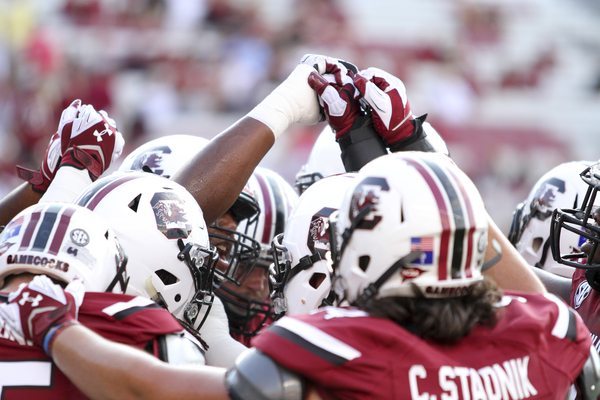 By REECE FUNDERBURK  ||  Eight games into the season and the University of South Carolina football team is officially 4-4 with a win over a Top Ten team and a loss to a team lucky to be in the top fifty.  So what exactly do we know about this squad through eight games?

Nothing.  We know nothing.

If you had to pick a game this year that represented this South Carolina team – which one would you pick?  The letdown performance recently against top five Auburn on the road?  A game that head coach Steve Spurrier and his Gamecocks took to its final play?

Or would you pick the Kentucky game – where Spurrier’s high scoring offense competed for sixty minutes only to watch the Gamecock defense surrender 21 points in the game’s final eight minutes.

We know South Carolina is talented on the offensive side of the ball.  We know fifth-year senior Dylan Thompson is a gunslinger who will throw the ball and that wide receiver Pharoh Cooper and running back Mike Davis are NFL caliber players – but have we honestly seen that level of effort in every single game this season?

On defense, we’ve seen South Carolina slow down one of the better passing offenses in the country in East Carolina – and contain the high-powered Georgia running game (with Todd Gurley).  But then there are the disasters – like the defense’s total inability to stop Kentucky’s Wildcat formation (fifteen times in a row) or the season opening shredding administered by Texas A&M.

That’s not to say South Carolina is not talented.  They nearly beat a top five team on the road (at night) and have beaten a top ten team at home.  Heck, if two plays were to have gone their way, the Gamecocks would be 5-2 and still competing for most of their goals at the start of the season.

But they are not … which leaves many fans questioning what’s left to play for the rest of the way.

What could help salvage the season?  A win on the road over Clemson is the most obvious answer.  In fact most Gamecock fans would take a win over the in-state Tigers than a trip to a lesser bowl game.  And the Tigers are nowhere near as good as they’ve been in recent years – although star freshman quarterback Deshaun Watson is expected to have recovered from his broken finger in time to play the Gamecocks.

Spurrier’s team is sitting at 4-4 – but despite the letdowns they remain more than capable of finishing the regular season 8-4 – a good mark for what most fans recognize is a “down year.”

Following the season, coaching decisions will have to be made. Special teams coach Joe Robinson is most likely out the following season and no one is safe on the defensive side of the ball, whether it be linebackers coach Kurt Botkin or even defensive coordinator Lorenzo Ward, whose unit is clearly suffering from the lack of elite talent it enjoyed during the first two seasons on the job.

Even Spurrier’s status is unknown at this point.  I believe he rides it out another season but does he want to take on what some might call “another rebuilding project?”  South Carolina is not reloading at this point.  The golden window of opportunity has since been shut as Tennessee and Kentucky are starting to revive their programs.

The answer is no we don’t and until we do, inconsistency is the only fingerprint that matches this season.

Normally, I’d tell fans to relax and look forward to next season but at this point there are far too many question marks regarding the state of Gamecock football to do that.