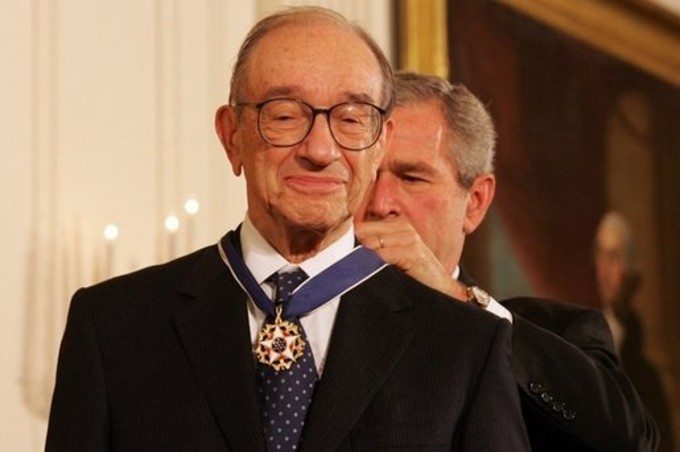 FORMER FED CHAIR SAYS “STIMULUS” WASN’T SO STIMULATING AFTER ALL …

By FITSNEWS || Former Federal Reserve chairman Alan Greenspan – himself a supporter of liberal monetary policy – is blasting the massive money-printing “stimulus” that took place under his successor Ben Bernanke (and which is continuing to some extent under current Federal Reserve chairwoman Janet Yellen).

In an interview with The Wall Street Journal, Greenspan – who ran the Fed from 1987-2006 – said the secretive central bank’s “quantitative easing” plan did not accomplish its objectives.  He also said the removal of the artificial “stimulus” from the economy would be painful.

Soon, the money presses will be shut down completely … but to what end?

Everybody knows what this grand experiment was … the greatest redistribution of wealth from the poor and middle class to the rich ever .

If you don’t believe us, ask one of the architects of the plan.  He’ll tell you.

And now Greenspan, the “Maestro” himself, is weighing in on the broader economic failure of this redistribution …

“Effective demand is dead in the water,” Greenspan told the WSJ, adding the money-printing “did not work.”

He added that he “didn’t think it was possible” to unwind the money-printing without adverse consequences to an economy that’s become hooked on the drug.

“We’ve never had any experience with anything like this, so I’m not going to sit here and tell you exactly how it’s going to come out,” he said, adding that the pressure to raise interest rates would likely come from the market, not the central bank.

He encouraged investors to buy gold … arguing it was not subject to the whims of government monetary policy.

Awesome … now he tells us, right?

Of course if at first you don’t succeed … print, print again.

@fitsnews too little too late not as smart as everyone in the #PoliticalElite thought! No one is to big to fail NO ONE!

US Economy Beats Expectations … Thanks To ISIS