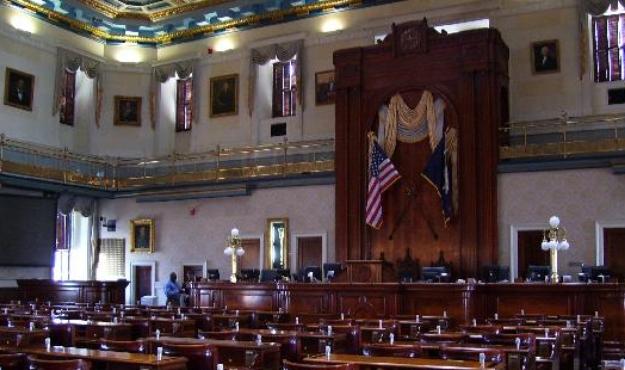 THROW OUT THE BUM STEPHEN GOLDFINCH …

By FITSNEWS || The citizens of S.C. House District 108 – a lengthy stretch of the South Carolina coastline running through Charleston and Georgetown Counties – were fortunate to have had a real citizen leader as their representative from 2011-13.

Sure we made fun of him a bit, but former S.C. Rep. Kevin Ryan voted way better than the vast majority of Democrats and “Republicans” in the S.C. House.  He was a solid pro-liberty, pro-taxpayer vote … and proposed several solid ethics reforms during his tenure (which have yet to be passed).

Unfortunately, Ryan was only 22 years old and realized quickly that – unless you have zero ethics – you can’t make a living for yourself as a member of the S.C. General Assembly.  So Ryan decided not to run again.

As a result, District 108 wound up with one of the most ethically challenged State Representatives we’ve ever had the misfortune of covering: Stephen Goldfinch.

Where to start with this guy …

To briefly bring yourself up to speed on Goldfinch’s various self-serving shenanigans (including his participation in an illegal stem cell network as well as a treasure hunting scheme that went awry) click HERE.

Then check out how he flat out lies about his past (including recorded votes to give himself a pay raise).

And while Goldfinch’s campaign slogan is “Common Sense Conservative Solutions” (how original), here’s the only real original idea he had as a member of the S.C. House.

Democrat Vida Miller represented this district for ten years prior to being defeated by Ryan – and she’s running against Goldfinch this year in an effort to reclaim the seat. At the risk of incurring the wrath of the “Republican” establishment in this state, we hope she succeeds.

Goldfinch simply has got to go …

Holy fucking shit! Will endorsed a Democrat. Oh, the carnage that will ensue in comments!

Or maybe not. Who can stand that asshole Goldfinch? Probably only Grand Tango and a dozen iterations of pogo/Sandi will get riled up about it.

I think Sic is taking up a strategy of scorched Earth or throw all the bums out. I am all for it.

Fuck Israel and God or he doesn’t exist , perverted marriage and abort as many children as possible.

Fits will endorse ya. So will Buz.

And as for you?

You’ll support a common ordinary crook while blabbering on about “conservative values” which only proves the point that conservatives have no values.

Nailed him, right there.

Which one of the rainbow-colored venomous snakes in your head told you to type that, pogo?

The political “kiss of death”…Buz Martin endorses Vida Miller.
Goldfinch in a landslide.

Maybe Will’s sources can find out why Tom Swatzel worked so hard in 2010 to oust Miller in favor of that quitter Ryan, then recruited Goldfinch and bribed Randy Hollister to withdraw from the 2012 Republican primary for the promise (fulfilled) of chairmanship of the Georgetown Republican committee only to abandon Goldfinch in 2014?

Poor Tom Stickler. He can’t help it. He was born a pro big government liberal and is jealous of successful people like Tom Swatzel. I guess being a neighbor of Vida’s in low rent Hagley helps too?

Vida may be a nice person however this November 4th you can’t vote for a Democrat in local, state or national elections.

Obama via executive orders will seek revenge against America when he loses the senate (and he will despite voter fraud).

The Black helicopters are landing!

I support conservatives. Unlike you Republicrats that support drunks and tax and spend liberals.

So you won’t be voting for Lindsay Graham ?

I would much rather that these corrupt Republican politicians be re-elected and then indicted, tried and convicted.
If it happens en masse this year, the SCGOP voter might learn something about voting for the R and voting for pathologically rigid ideology rather than a decent person.
But, I doubt it. Not from what we’ve seen. The SCGOP voter doesn’t appear capable of learning from experience.

LMAO!!!nitnut knows the SCDP is in for another ass whipin next Tuesday so he is hoping for a massive SCRP victory!

Does anyone remember the Sandy Island Ferry nonsense

Hah…. I shouldn’t be laffin’ this late at night — good one!

The angry tweet is actually one of my favorite Goldfinch Spoiled-Daddy’s-Boy-Hissy-Fits. “Does anyone actually read this garbage?” A dude with 114 followers on Twitter wants to call out a site that measures its page views by the hundred thousands? What a dumbass. I hope Vida Miller whips his pansy ass next week- if a a Dem in that seat for two years is the price for ditching Goldfinch, so be it. We’ll have a R governor, Senate, and House. Won’t hurt a thing…

And Mike is my second favorite Republican.Unlike the Colonel ,he doesn’t beak a leg to comment in when Fits runs one of his weekly racial posts though.

Here we see him literally thankful that Republicans will still dominate state government in SC,while he is one of the biggest BITCHERS here about how rotten things are.

Its probably the Democrats fault.You better watch out for Vida Miller there Mike.

You know how THOSE people are!

Hey…lighten up, Frances! We’re not allowed to have a party preference any more?! I know both parties suck (and hard), but you gotta pick one. If Miller gets in and votes hard left on environmental stuff, tax issues, etc., the voters there can run her off. That’s the game, friend. I rarely bitch about how rotten things are in SC- I think yo uhave me confused with someone else. I’m usually the one telling folks who cry incessantly about how horrible SC is that they must not have lived in too many other places, because life is good here. It’s why everyone and they’re damn brother is leaving the NY / NJ area and beating a path here.

Now, what are these racial posts I’m supposedly skipping out on? You lost me on that one… I

Here is a good example of ‘wise men see, only fools rush in’…Goldfinch’s lawfirm partner Reese Boyd severed the partnership the minute prosecutors charged Goldfinch in November 2013….Reese Boyd proven to himself he was right on this, when the treasure hunting scam of Goldfinch hit newspapers. Goldfinch managed to rope-in other partners to keep the law firm going for a while. Now I hear that his rock-star and the brains behind the Goldfinch Winslow firm, Joshua Holford, also left Goldfinch. Matter of time before other partners see the light and leave. Hey..you can only fool people for so long. But wait..who rushes in…? Aha…the brilliant minds of Nikki Haley….Tim Scott…Tom Rice…and the latest Bruce Bannister, think they know better than the prosecutors to go out and vouch for the crap that Goldfinch is. Imagine selling stem cells to ALS patients and making 5 million dollars from it. Not one person I know in the legal world believes Goldfinch’s crap about Goldfinch charged for his employee’s crime. Goldfinch is lying, plain and simple. Goldfinch has to answer one question to public…what was he selling to make all that money? Simple. I would have no problem telling what I sell through my company. As his opponent says, public has a right to know who Goldfinch really is. But again we have the fools rushing in to help Goldfinch and the Goldfinch circus drags on. Quite and entertainment, nonetheless.

Thought I would visit Goldfinch’s campaign websites to see his faith claims: “Christian conservative”, “distributing bibles to children in Zimbabwe”, “wife is a director of children’s ministry”, “very active in church ministries”….wow…Goldfinch would like us to think that we are looking at an exemplary display of Christian faith and Christian living….until you read about his stem cell scam, treasure hunting scam, lies, fraud and abuse of power allegations. Who IS Goldfinch…will the real Goldfinch please stand up….will the prosecutors show us the real Goldfinch, for our sanity and for the sake of public trust in our justice system?

There will always be a sucker willing to work for someone with a local family name and political ties. Always. And the Horry/Georgetown County Rs will always vote for their own even when they are being drug away in cuffs. Thad Viers much??? What’s sad isn’t that SC government is such an old boys club but that it is filled with some of the stupidest, least qualified and most ethically challenged people imaginable. Truthfully- would any of you tie you money or career to a one of these dimwits??

“Never argue with a man that buys his ink by the barrel”-Mark Twain. While Twain meant this about arguing with a newspaper publisher in the 19th and 20th centuries, in the 21st century this applies to bloggers and cyber journalists. It will end badly, very badly.