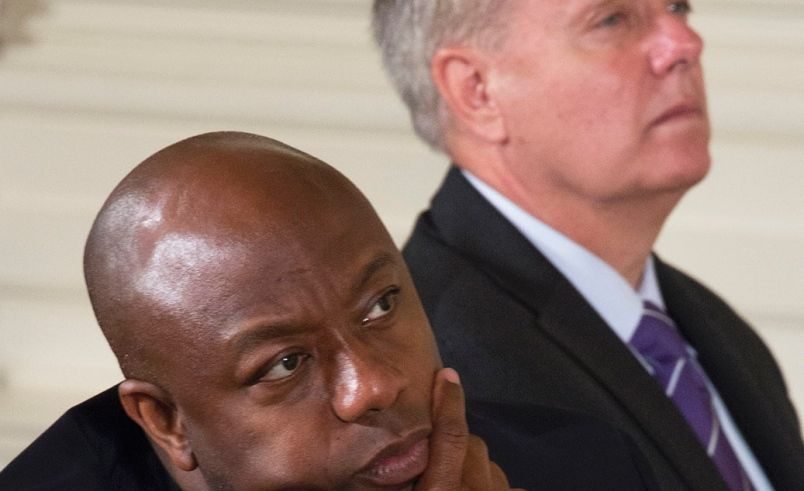 By FITSNEWS  ||  South Carolina’s two United States Senators are from opposite ends of the Palmetto State.  One is black, the other is white.  One has been in Washington, D.C. for less than four years – the other has been there for more than two decades.  One is part of the emerging limited government wing of the U.S. Senate … the other is a hard core tax-and-spend liberal.

One likes girls, the other …

You know what, never mind.

Basically, the only real similarity between Lindsey Graham and Tim Scott is their shared likelihood of being reelected in 2014 – Graham to a third six-year term and Scott to fill the remaining two years of the term vacated by former U.S. Sen. Jim DeMint.

Yet within these two looming victories lies a storyline worth considering … namely the vote totals and the margins of victory Graham and Scott are expected to achieve next week.

Nineteen percent of respondents are “not sure” who they will support.

When voters who lean “Republican” or Democratic are thrown into the mix, Graham leads Hutto 43-28 percent.

In the other race, Scott leads his Democratic opponent Joyce Dickerson by a much broader 53-26 percent margin – with 15 percent undecided.  When leaners are included, Scott’s lead expands to 56-28 percent.

In other words, Scott’s support is 13 percentage points higher than Graham’s no matter how you slice it … according to this survey, anyway.

Democratic operatives are conceding Scott’s seat, but they say Graham’s race could be closer than expected.

“(Hutto) is only getting 62 percent of the African-American vote because he’s still unknown,” one Democratic consultant told FITS. “Should he end up with 95 percent of that vote, the closeness of this race will surprise people.”

Obviously Hutto isn’t going to win … but Graham’s margin of victory, unlike Scott’s, is shaping up to be well south of a “mandate.”  It’s just a shame this most dangerous of career politicians couldn’t have been taken out altogether …

Missing Grant Money: South Carolina Senator Has Some Explaining To Do

Our citizens will vote for a sloth if it were on the ticket as Republican.

Gotta have balance for Massachusetts but at least we have Clyburn.

One of these guys likes girls? News to me…

No evidence they like boys either. Too bad. Could be the ultimate power couple.

The “Big Brother Bromance” as it were.

Thanks – now I’ll be poking my mind’s eye out over that one.

Why is it y’all constantly claim homosexuality as so noble…yet you never miss a chance to try to insult and cut people down the people you hate by attacking them as gay?

Either it’s the new African-American (unquestionable dignity regardless of reality) or it’s an embarrassment subject to ridicule because everybody knows you are weak, filthy and lascivious people?

Sen. Scott still has that new Senator smell about him. People get less enchanted with incumbents of both parties, yet they almost always vote them back in. Scott also is part of the purity wing that has almost zero actual influence on legislation, so they get to vote whatever is convenient. Graham believes legislators should do more than talk, while the likes of Ted Cruz get tax-funded salaries to do what Rush Limbaugh does on the radio.

Ever wondered what the URL for the Congressional Black Congress Membership page is? Check this out:

It’s because of Congresswoman Marsha Fudge from Ohio.

“… In addition to his political career, Scott owns an insurance agency, and works as a financial advisor. …” – Wikipedia: http://en.wikipedia.org/wiki/Tim_Scott

He may have some sensibilities about making and setting a realistic federal budget.

(Wondering: has He been invited into the congressional “black” caucus?)

No, they treat him like a turd in the punch bowl. Did the same with Allen West. Disgraceful behavior. It should be called the congressional black democrat caucus.

Mmmmm.. maybe He and Mr. West should double team ’em.

Tim Scott is nothing more than a stand in place holder for Nicki Haley.
As soon as she’s thru screwing up SC, she will defeat Scott for the Senate.
Which will be easy as Scott is worthless as a Senator representing SC.

She won’t defeat him. How could she even run against him, given she appointed him?

She has illusions of being on the ticket in 2016 for POTUS or VP. She will find out that just because you can bullshit sandlappers, doesn’t mean anyone else will buy your bullshit.

That’s not a real high standard to reach…

For the life of me, I don’t understand why Bradley didn’t run against Scott.

Because theoretically Graham should be having a tough reelection bid. And he would be having one if this wasn’t South Carolina we were talking about.

Oh yeah, that whole heads up asses thing. Got ya.

LMAO…the Democrats have conceded defeat..now you’re trying to impugn the Republicans by victory margins over Obama…Dumb@$$…Hahahahaha…As long as you LOSE…that’s what matters most.

Mandates for both in primaries and general election. Scott will get some black votes and has a weaker opponent. Graham has the anti incumbent taint that Scott hasn’t had time to sink in.

You forgot to point out their biggest difference. One is owned by defense contractors and the other is owned by the Koch Brothers.

Sic Willie answered his own question when he mentioned the name of Scott’s opponent. It was met with a resounding WHO?

I have never seen an ad or heard either man mention a woman. No pics, no chat. I think when you hide something like that, you are not revealing your entire identity. And no one is pushing that button. But it is one of the 800 pound gorillas in the room here in SC. I am amazed it is not an issue in this post-outing era, when people are more relaxed, at least folks under 30, about sexual orientation.

More anti-Graham hysteria and silliness. Hutto will certainly get considerably more than 62% of the black vote, but that will in no way threaten Graham. As for the disparity between our senators, grown-ups (and pollsters) know that the difference stems from incumbency. Scott hasn’t been up there long enough to piss himself off, much less anyone here. They’ll both win (and by comfortable margins), just liek most of us on here predicted six months ago while FITS was still pre-calling the “momentum” race for Senator Mace, I mean Senator Ravenel.