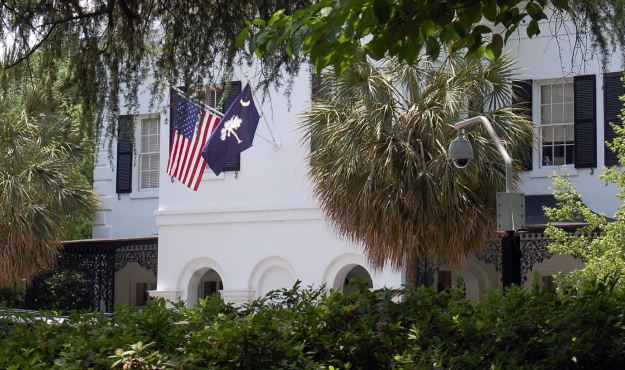 By FITSNEWS  ||  With five weeks to go before election day, “Republican” S.C. Gov. Nikki Haley enjoys a ten-point lead over Democrat Vincent Sheheen in the 2014 South Carolina gubernatorial election – according to one poll, anyway.

Haley enjoys a 43.6-33.6 percent lead over Sheheen in the latest Winthrop University poll.

Winthrop’s pollsters surveyed 1,082 likely voters in South Carolina between September 21-28.  The poll’s margin of error is plus or minus three percent.

Another poll, conducted by Columbia, S.C.-based Crantford Research, found a much closer race – with Haley leading Sheheen by a 41-37 percent margin.  That poll had Ervin at seven percent – with fifteen percent of voters undecided.

Other internal polls conducted by GOP and Democratic firms have Haley with mid- to high-single digit leads – with Ervin drawing anywhere between 12-15 percent support.

Bottom line?  Whichever poll you choose to believe, Nikki Haley is winning this race.  And barring some sort of seismic “October Surprise,” she will be reelected governor of South Carolina on November 4.

Well hell, why should we vote then? Those college kids say we wasting time. VOTE TOM ERVIN.

I went to one of Tom Ervin’s “town hall meeting”s the other day. He has a good line, a few people might actually vote for him till they realize he is only there to dilute Nikki’s vote and help Shitheen. Nikki has done a fair job, not great but better than either of the other candidates. Looks like four more years for her.

Fair job my ass!!!!!
In a short: SCDOR hacking = two fucking years later and no answer from her or anyone else.

In a short: SCDOR hacking = two fucking years later and no answer from her or anyone else.

Just remember, if SC votes her in again, that means most South Carolinians are perfectly fine with the horrid response or are too apathetic to care about getting rid of her.

It’s important to observe what the voting populace is willing to subject themselves to because it tells you just how close to the bottom of the barrel our state is willing to settle in.

What is the question you’re looking for an answer to?

You are an idiot and loser sir. It is your brain dead party voting kind which sticks the rest of us with this crap!
I’m sure you still support the immature child Andre also.

She will win by a landslide.

A thinking, somewhat sane person should read this and suddenly feel the overwhelming desire to slit his/her wrists regardless of political affiliation.

The problem is, those are the very people that need to remain alive while the rest, far more numerous, do so.

So, it’s hopeless. Might as well grab a mojito and enjoy the band music as the ship slowly sinks. Find a way to enjoy it. It’s like freak watching at the mall while the wife shops.

I’m wondering with the new ads that have come out saying Sheheen is lying about Nikki lying how long either of these bozos will be in the lead.

She was doing better just lying about keeping that girl from killing herself.

Will, you are a poll junkie. Two polls have the sitting gov under 44% and she is a shoe in? Obviously hard for Sheheen to win but if you are in Haley’s circle you are not popping the bubbly just yet.

Haley is above 50%….Sheheen 41%-42% and Ervin/French 4%-5%. So far Ervin/French are taking more votes from Sheheen because Ervin supports abortion and gay marriage.

Obama turned a 5%-7% race into a double digit Haley win. Kasich is riding the same “wave” in Ohio as neither Haley or Kasich have credible opponents.

Four years ago (and only 3 weeks before the election), this same pollster showed Haley winning by almost as large a margin, 47-39.

Winning twice with 51% or less in a ultra Red state will not get Nicki a spot on the 2016 ticket or a Senate seat either, even if she does win.

Kasich is winning, because his opponent collapsed. Tom Corbett (R-PA) is getting trounced. Brownback (R-KS) is trailing too. So is LePage (R-ME).

Again I dont think there is one poll out there with Ervin in it that has her over 50%. The Crantford poll taken over the same period of time has her about the same as the Winthorp Poll.

I do not believe Sheheen will win, but a sitting gov at under 45% is not good. Also, dems always get atleast 43-45% if they do barley anything.

If Im on Team Sheheen, they have to be thinking….we have a chance.

Hell Beasly polled over 46% in every poll before losing to Little Jim Hodges.

OK, I just gotta say it.

This is not a true representation of voters just old folks with land line phones. Haley is going to loose this year its a given.

Funny thing – old geezers with land line phones generally show up and vote. You might consider this is an off year and there’s no “…mainstream African-American who is articulate and bright and clean and a nice-looking guy…” running for anything.

Well, there is Tim Scott….

Visit the poles, on election day, and see how many have tattoos.

What has Nikki Haley done to deserve reelection?

That’s more than Gilligan can say.

You are 25% correct which is an improvement for you on Fits. The American people have turned on Obama and no longer believe he has the best interests of the nation in his heart and don’t’ trust him anymore. Since they can’t punish Obama at the ballot box and impeachment is impossible at this time the voters are going to send the Democrats a message this November.

Republicans will pickup 8-10 senate seats, 12-14 in the house and make huge gains in the state legislature’s.

You’re wrong. Look at the polls, especially with TP Governors. Walker(WI), Scott(FL), Brownback(KS), Deal(GA), Snyder(MI), Lepage(ME) and Brewer’s open seat (AZ) are all either losing or within the margin of error. Corbett (PA) is getting his ass handed to him. Don’t sit here and act as if what we do in South Carolina is indicative of the nation as a whole. It’s indicative of South Carolina.

Wrong? LMAO….governor races are tough as all those you mentioned had to make tough choices to save the states economies and Obamacare has eliminated new hiring and job creation.
Scott and Walker will win as Charlie Crist is a traitor like 3% Tom Ervin and Walker ‘s reforms have been successful in Wisconsin.

RCP has Republicans picking up 8 senate seats and 7 house seats.Polling I see says they will do better than that.The gains in the state legislatures will devestate the Democratic Party for a decade.

I call bullsh*t. Walker’s reforms have Wisconsin with 1.5 Billion deficit w/o ObamaCare, now he’s talking about drug-testing food stamp recipients again. In short, he’s fcked. People don’t like Crist because of his flip-flopping I’ll give you that, but they’ll vote for him before Scott. Job Creation in Florida? Florida’s unemployment rate is 6.3, which is .1 lower than SC, and higher than the National rate. Repubs basically have to sweep every race to take the majority in the Senate, without taking too long to write I’ll just say the thought of Repubs holding both houses in Congress is a scary/shitty thought, and enough voters will vote in their better interests. The only variable that really matters is how many people actually vote. More people Dems win.

Unfortunately, the lowest-information demographic in SC will vote Haley back into office.

Haley is seeing some democrat support after Ervin came out in support of state sanctioned gay marriage.

Yes, as opposed to those sophisticated voters who nominated Alvin Greene…

“Sheheen” sticker nestled between “Obama-Biden” and “Mayor Steve Benjamin”, and something about well behaved women, on the bumper of a Prius arrogantly doing 19mph in a 40mph zone. No thank you.

Driver’s seat as far forward as possible, clutching the wheel in a death grip with both boney hands, pinched face peering through granny-glasses riveted to the road ahead…..Yeah, it’s the same car.

Must have been her daughter driving it the couple of times she’s blown by me on 277.

Yep, they just keep drinking that Republican lever pulling Kool-Aid.
Don’t split your ticket by learning anything about what each candidate stands for, or has done in the past, or will do in the future. Something that takes real effort, and is completely missing in SC

Will, I hope you won’t go silent on the Senate poll.

T-Rav is on the move, right? I can’t wait to hear your take on this one.

T-Rav is really trying to tickle Lindsey Graham ….so far….

Four more years of this incompetent, lying, cheating idiot!
I wonder how many children will die?

Nikki will end up indicted before the end of a second term.
If Bill Nettles weren’t the sorriest US Attorney the state has ever seen, she might be gone now.

It just shows that SC is still full of stupid lever pulling fools.
Dumb nit wits with no common sense, that never read the news, and think everything will be all right on Sunday. While the State burns down around them, and the Haley Governor rips off everyone on her way to replacing the Dolt Senate Holder: Tim Scott.

This is all going to end badly, as many people outside of SC see Haley as a presidential candidate like Sara Palin.

We are so screwed as a State and as a Nation by uneducated voters.

You should have thought of that before you voted for Obama twice.

Ah you remember, I did vote for him twice. Even though I know that only 3 Presidents in US History ever had a good second term.
The problem was that the Republicans should have come up with better candidates than they did. Really: Sara Palin for President??
The Republicans, who I majority vote for most of the time, had only candidates that were probable candidates for the nut house.

We need a good 3rd party choice, or a 5 year term limit for all Presidents, Senators and Congressman. Along with a 10 year term limit for all Supreme Court Justices. And just for kickers, a campaign finance law like Iran. Where you can be executed for making campaign contributions, or even campaigning for another candidate while still in office. Just saying, there are a few good things about Iran’s politics.

This is OK but not great news for Haley. She is an incumbent running for reelection and she is well under 50%. Plus, 12.6% says they are still undecided. These voters have had four years to get to know Haley and she still hasn’t made the sale…that is not good for her. And, I think the poll’s description on Ervin as a petition candidate, instead of as independent Republican, may have skewed the results in Haley’s favor.

What a no-brainer, no insult intended, people of SC.

SC unemployment is lower than the national average