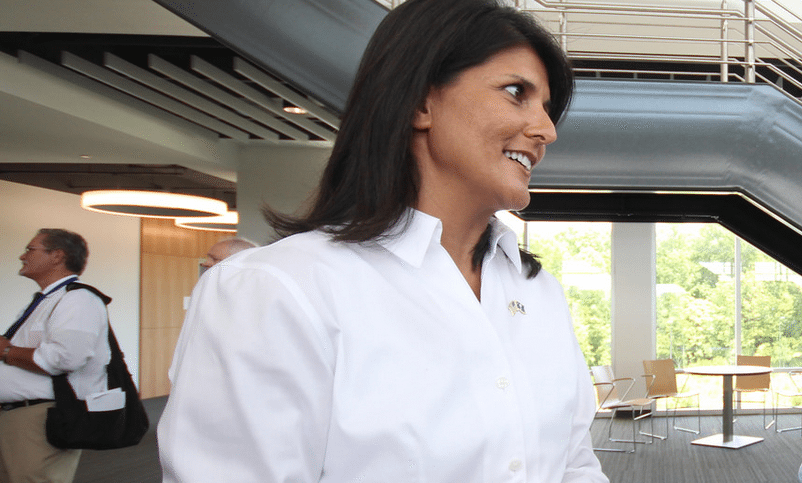 At this point, it should be abundantly clear to anyone with multiple brain cells that S.C. Gov. Nikki Haley is a complete and total hypocrite on the issue of ethics reform (see HERE, HERE and HERE).

The governor loves to portray herself as a champion of cleaning up Palmetto politics, but this year she’s pushed legislation that would actually move South Carolina backward  on this issue, making the state even dirtier and more corrupt than ever.  Even when Haley was proposing legitimate reforms – there wasn’t a single one of them she hadn’t already violated.

Haley has proposed income disclosure for lawmakers – even though she failed to disclose more than $40,000 she received from a company doing business before the state. She proposed consolidating ethics cases under an independent agency – even though she relied on a corrupt committee of her former peers to evade conviction on a wide range of public corruption charges. She pushed for mandatory recusals from office – even though she failed to recuse herself from votes benefiting her secret employer. She demanded reforms to the state’s Freedom of Information Act (FOIA) – even though her administration illegally deleted emails and deliberately withheld public information from reporters. And she asked lawmakers to correct a flawed election law that resulted in hundreds of candidates being booted from the 2012 ballot – even though she co-authored the statute with her longtime ally, S.C. Rep. Nathan Ballentine.

Anyway … all of this is old news at this point.  Also old news?  The story of former S.C. Governor (and current first district congressman) Mark Sanford regretting the victory he gift-wrapped for Haley when she ran for the “Republican” gubernatorial nomination in the spring of 2010.

We first reported on this back in December 2010, but the Sanford-Haley feud picked up momentum when The New York Times magazine’s chief political correspondent Jim Rutenberg published a sprawling story on Sanford’s remarkable 2013 political comeback.

Included within that story was an account of a meeting that took place in the governor’s office in early 2010 involving Sanford, Haley and Jon Lerner, a Maryland-based political consultant who has advised both candidates.

According to the report, Haley and Lerner “continued to press” Sanford after he initially declined to “devote several hundred thousand dollars to a media campaign supporting (Haley’s) candidacy.”

Sanford eventually relented, though, authorizing the expenditure of $400,000 from his Reform SC political organization to pay for the ads – which were written and produced by Lerner.

Was any of what transpired there legal?

No.  In fact sate ethics law (Section 8-13-1340) expressly prohibits such coordination between candidates and their committees.

Not only did Haley break the law, though, she flat out lied about it – telling a reporter from The (Spartanburg, S.C.) Herald Journal in May 2010 that there was “no connection” between her campaign and Reform SC.

Right … except for when she and her consultant pressured its leader to cough up $400,000, which her consultant then turned into television ads on her behalf.  Make no mistake: Had those ads not run, Nikki Haley would have finished dead last in the 2010 governor’s race – because no one would have known who the hell she was.  She simply didn’t have enough money to get her name – or a message – out to the voters.

The Reform SC ads – which were eventually pulled from the air under the threat of a lawsuit – did that for her.

Once again, it’s hard to find an “ethics” law Haley hasn’t broken on her path to power.