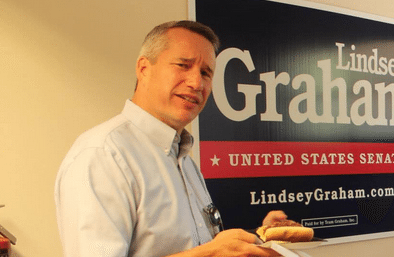 POLITICIAN HOPES TO “SACRIFICE” FOR “THE PEOPLE …”

The 2014 gubernatorial election in South Carolina has only started to heat up just recently, but S.C. Rep. Tommy Pope – a “Republican” from Rock Hill, S.C. – is already eyeing the next race.

Pope – a former solicitor – told WRHI AM 1340 that he wants to be the Republican gubernatorial nominee in 2018. In fact he’s already posting “Pope for Governor” logos on his Facebook page … sort of the political equivalent of a premature … ehh … hmmmm … nevermind.

“What I hope to bring more than anything (to the race) is caring about issues bigger than ourselves,” Pope told the station. “I love this state, I love the people, I love our natural resources. If the voters are willing at that time, it would be an honor. It would be a sacrifice for the Pope family but it’d be an honor.”

Great … another politician who’ll “sacrifice” for the “honor” of “caring” for “the people.”

Seriously … that’s like the grand slam of self-important cliche-pandering.

Pope would enter the race as a second tier candidate …