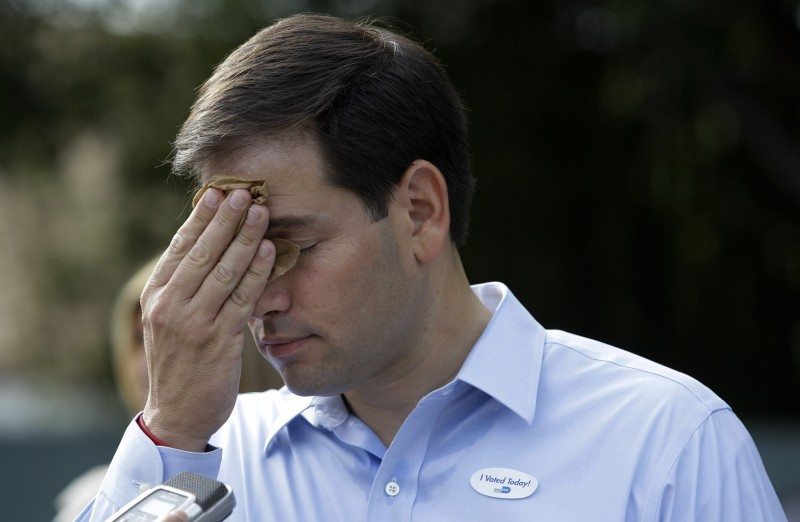 This website was originally quite keen on U.S. Sen. Marco Rubio (R-Florida) – repeatedly referring to him as “one of a handful of genuine fiscal conservatives in the U.S. Congress.”

Technically that’s still true. Rubio’s voting record is much better than the vast majority of “Republicans” in Washington, D.C., although let’s be honest – that’s not exactly a ringing endorsement of his pro-free market, pro-freedom credentials.

Rubio first drew askance looks from us back in 2012 when we discovered his views on sugar subsidies (he supports them). More recently, he’s revealed himself to be a global interventionist and staunch supporter of America’s domestic spy network – exposing troubling ideological moorings.

This month, Rubio is receiving criticism for his refusal to admit whether he smoked pot.

“If you say that you did, then suddenly there are people out there saying, ‘Well, it’s not a big deal,’” Rubio told Yahoo!’s Politics Confidential. “On the other side of it is if you tell people that you didn’t, they won’t believe you.”

Rubio’s refusal to acknowledge his prior drug use doesn’t bother us that much. One could make the case it is reflective of an evasive character, but whatever – that’s his business.

Our problem with Rubio is his support for the sustained criminalization of marijuana and other drugs.

“I believe that adding yet another mind-altering substance to something that’s legal is not good for the country,” he told Politics Confidential.

So in Rubio’s view government should continue its failed “War on Drugs?” Keep spending billions of tax dollars annually on the apprehension, prosecution and incarceration of non-violent drug offenders? Keep feeding costly government bureaucracies and violent black marketplaces? And keep foregoing potentially billions of dollars in revenue for debt repayment and other core government functions?

Once again, Marco Rubio’s commitment to our liberties and free markets is being exposed. Once again, he’s just paying lip service to woo impressionable “Republicans …” making him less and less of an outlier in the failed party to which he belongs.