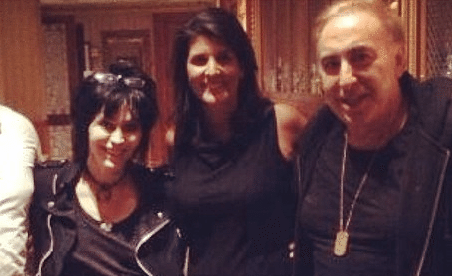 “This week the South Carolina General Assembly is debating ethics reform. And where is our governor?” Ervin asks in the 30-second spot. “Governor Haley is in New York having lunch at the Waldof Astoria. Who with? Rock star Joan Jett.”

Ervin’s ad goes on to say Haley “promised us real ethics reform, but instead of fighting for South Carolina, Governor Haley is missing in action.”

“The Ervin campaign will continue to discuss issues important to the people of South Carolina regardless of Governor Haley’s national ambitions and jet setting,” said campaign spokesman Aly Darby. “The growing lack of trust average citizens have towards the state government — due to the numerous scandals and ethical lapses in Columbia — would make one wonder why Governor Haley has chosen to abandon the debate. This is yet another broken promise from her.”

Haley publicized her lunch with Jett – although she neglected to mention the ritzy venue.

“I have always said there are 3 people I would love to sit down with: Margaret Thatcher, Gov. Carroll Campbell, and Joan Jett,” Haley wrote on her Facebook page. “While I will never have the opportunity with the first two, Michael and I sat down with my music idol Joan Jett today and her producer Kenny Laguna. Strength, talent, passion, and courage…it doesn’t get any cooler than her.”

Haley was in New York for a meeting of the Republican Governors’ Association (RGA) – the group financing much of the negative advertising blitzkrieg against her 2014 Democratic opponent, S.C. Sen. Vincent Sheheen.

For the latest (surprisingly positive) developments on the ethics debate, click HERE. For a refresher on Haley’s hypocrisy on this issue, click HERE.

The NAACP Strikes Back

A $26.6 Million Bailout For Bull Street