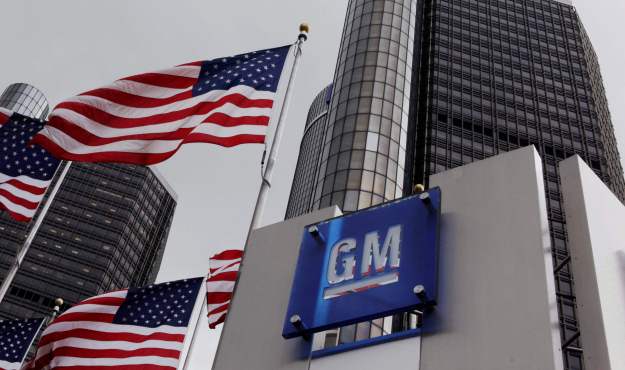 Believe it or not, we still build stuff in America … just not very well.

Take Government Motors … err, General Motors … which earlier this month reported having a record 825,805 vehicles sitting unsold on dealer lots. Well guess what, GM has now broken another record (and not a good one) – record recalls.

This time the company is dealing with a faulty dashboard light module in its 2004-08 Aveos – an issue which has caused an unspecified number of fires.

So far this year, GM has issued thirty recalls affecting 13.8 million vehicles – shattering 2004’s old record of 10.7 million recalled vehicles. Of course these troubling numbers have been overshadowed by the number ’13’ – which is how many deaths have been linked to an ignition switch problem in certain model compact cars.

The company issued a recall in that case back in February, but investigations have revealed GM knew about the problem for more than a decade and did nothing about it. Also, some suggest the death toll related to the ignition switch glitch is actually much higher.

The Detroit-based firm – which received billions of dollars in bailout money from taxpayers in 2008 – paid a federal fine of $35 million last week related to the issue, but still faces legal action over the debacle.

GM – once a vital engine of free market growth – has become a symbol of everything that’s wrong with this country.

Let it burn as far as we’re concerned … especially after the federal government screwed the company’s investors out of their money during the 2008 takeover as part of a sop to the labor unions.

FITS Forum: Teaching The Entire Fabric Of Our Nation’s History

GM has been utter shit since the 2000s at the very least. The last decent GM car I was in was a ’92, which had fewer problems than an ’07 GM car I had the displeasure of driving once.

“I had the displeasure of driving once”
————————
HaH! Was that when you returned it to the dealer before sundown?

I’ll bet the stereo was killer, though.

FITS, per usual for a liberal, bashes America in the first line.

Dumb@$$…GM, w/ Obama’s handpicked Czaress, may be preforming one F*#k up after another..killing people in the process…But Ford is Doing GREAT. BMW and Mercedes are Wonderful cars, made right here in the US of A.

PS: Remember when Obama crucified Toyota when he took office over some bogus recall demand…Wonder if the media will be as unmerciful on Obama-Motors????

The thing about GM is they should have gone belly up. Gotten rid of the UAW and come back like Toyota, BMW, Mercedes etc. Much better quality. Unions , at one time were necessary. 8 Hr. work day, child labor, pensions and benefits, etc. but in order to keep the workers happy they kept asking for more, till they broke the companies and the govt. unions have done the same thing to the cities, states, and fed. govt.

The problem with unions isn’t always what they are asking on behalf of the employees, it is often what they ask on behalf of themselves. I’ve seen quite a few deals that satisfied most employees’ wishes get rejected because it didn’t grease certain pockets.

As far as “at one time were necessary,” I’d say the reason they still exist is likely because the employees feel they still are necessary. Unions aren’t always saints, but when you can’t trust your employer to treat you decently, it doesn’t leave many options open.

Yeah… no “private” company would do *that*!

The acknowledgement that GM is not a private company is an important comment.

Love me some AC/DC

But you know Chrysler will never die

The previous CEO state the companies future was in China at the rate they are going it maybe the Ukraine. If they can’t pass off the claims to the old GM they are going to get there ass tore up in the courts.

I heard a guy on TV yesterday saying that the number of cars being recalled is so high because GM has standardized the platforms around the world and eliminated models so much that problems that might have been model specific in the past, now cut across a much larger swath of cars. Does that make sense?

Standardization lowers costs. For example, that same oil filter can be used on several different models. This results in higher volume and lower costs for the manufacturer.

Same thing with software. If there is bug in the Windows operations system, it becomes common to all Windows computers.

Recalled units > units produced would = bankruptcy for most companies.

The act of bankruptcy, which GM avoided in making their deal with the devil/government, is good for two reasons:

#1 Those with interests in what’s left of a company(unpaid vendors, bond holders, etc.) get a fair shake on deciding whether to renegotiate or simply have the company liquidated and take what’s left.

The government prevented that from happening in allowing GM to “restructure” according to a bureaucrats diktat. Remember, government workers have no idea how to run a business, but now they get to tell everyone not only what changes will be made, but more importantly they usurped basic property rights by screwing the bond holders and then handing an ownership percentage to the union. It’s outright theft.

Probably to buy votes at the time, but regardless of the reason it’s an abomination in terms of property rights.

#2 When a company(or person) goes through bankruptcy, it forces a change in culture. If the company survives(with new agreements in place to pay off a % of what is owed), the attitude must change. They are exceptionally tight with money, often times new leadership is installed, all their practices are rightfully self review/changed.

Did any of that happen with GM? No. They became just like every government agency in existence, unappreciative of taxpayer money and opening the spigot more by their tortured relationship with no nothing pols & bureaucrats.

If the employees at GM were honorable, they’d all get new jobs or slit their own wrists.

The rich already have too much power – too tall to fall.