FACIAL RECOGNITION SOFTWARE ON THE RISE …

The Federal Bureau of Investigation (FBI)’s facial recognition database could contain as many as 52 million images within the next two years.

Operated out of the agency’s futuristic Next Generation Identification (NGI) headquarters, the facial recognition database had 13.6 million images of as many as eight million Americans in 2012. Last year, the image total climbed to 16 million. That data is courtesy of the Electronic Frontier Foundation, which has been diligently tracking the evolution of this Orwellian program.

“NGI builds on the FBI’s legacy fingerprint database — which already contains well over 100 million individual records — and has been designed to include multiple forms of biometric data, including palm prints and iris scans in addition to fingerprints and face recognition data,” EFF’s Jennifer Lynch explains. “NGI combines all these forms of data in each individual’s file, linking them to personal and biographic data like name, home address, ID number, immigration status, age, race, etc.”

Okay … assuming enhanced identification techniques were being utilized to protect our lives and liberties via legitimate, constitutionally prescribed methods (assuming such methods still exist in America), we would have no problem with such a program.

Law enforcement is a core function of government – and different agencies sharing identifying information on convicted criminals as part of active investigations overseen by duly appointed prosecutors and judges is entirely appropriate.

That is entirely unacceptable …

“By 2012, nearly half of U.S. states had at least expressed an interest in participating in the NGI pilot program, and several of those states had already shared their entire criminal mug shot database with the FBI,” Lynch reports. “The FBI hopes to bring all states online with NGI by this year.”

Is your state going along with this scam?

Check this map from EFF … 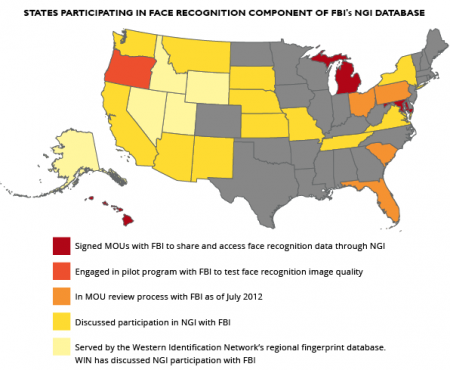 Again, if we could trust our federal law enforcement agencies to administer justice evenly, openly and in a manner consistent with the preservation of fundamental liberties, we’d have a whole lot less heartburn about this sort of database.

As it stands now, though … the feds simply cannot be trusted.

Anyway, for much more on this issue be sure to read Lynch’s article on the EFF website below.