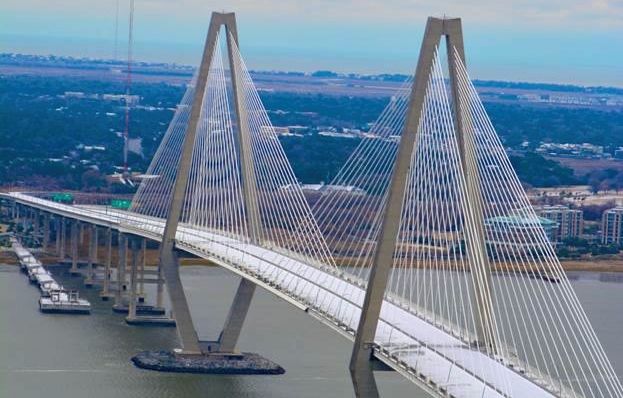 Three days after Winter Storm Leon did its worst (which honestly wasn’t that much), the most important bridge in the South Carolina Lowcountry remains shut down.

Well let’s rephrase that … the Arthur Ravenel Jr. Bridge has been closed a second time.

After briefly reopening following a two-day shutdown earlier in the week, the Ravenel Bridge was once again closed on Friday morning at 10:30 a.m. due to ice falling from its 120-plus overhanging cables.

“I saw a large chunk of ice falling in front of me in the middle of the lane …” one motorist told the station. “As soon as I saw that, I slowed down and then heard a large crash on top of my car.”

At least one person was injured when a falling piece of ice struck their windshield and sent glass into their eyes.

The latest closing has created another round of huge traffic delays in and around Charleston – fomenting existing rage against S.C. Gov. Nikki Haley’s Department of Transportation (SCDOT), the agency which is responsible for the bridge.

“All arteries are backed up trying to get to Mount Pleasant,” one local told FITS, referring to the town of 70,000 opposite the Cooper River from downtown Charleston, S.C.

It’s another clusterf*ck, in other words …

Wonder if he’s standing by that quote today …

Opened in 2005, the Ravenel Bridge is the third-longest cable-stayed bridge in the Western Hemisphere. More than 90,000 vehicles cross it on a daily basis. Usually …

Why We Are Smarter Than They Are