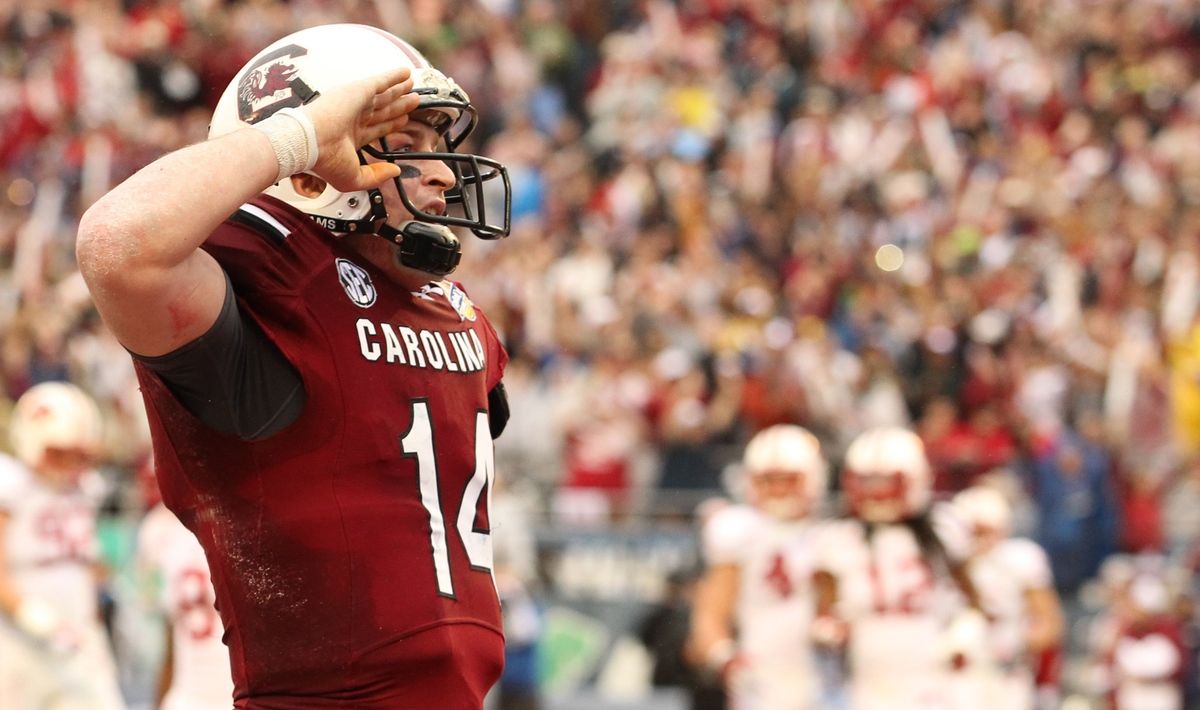 University of South Carolina quarterback Connor Shaw put an exclamation mark on his record-setting Gamecock career in the 2014 Capital One Bowl – his final collegiate football game.

He finishes his Gamecock career with a school-best 27-5 record as a starter – including a perfect record at home and in bowl games.

Meanwhile junior defensive end Jadeveon Clowney – another Gamecock playing in his final collegiate football game – turned in one of his best games of the season, recording five tackles (including one for loss), numerous quarterback pressures and a pass deflection that led to an interception late in the game.

In fact the Gamecock defense – gashed in the first half by All-Big Ten running backs Melvin Gordon and James White – rallied down the stretch, forcing turnovers on Wisconsin’s final three drives and stuffing its vaunted rushing attack on a critical fourth down play early in the fourth quarter.

Clowney confirmed after the game that he will enter the NFL Draft this year – where he is likely to be among the top five players chosen, perhaps even the No. 1 overall selection. Defensive tackle Kelcy Quarles and defensive back Victor Hampton will join Clowney in declaring themselves eligible for the draft.

While Clowney’s status as an elite NFL prospect has never been in doubt, Shaw gave pro scouts plenty to ponder against the Badgers (9-4, 6-2 Big Ten) – who lost their fourth consecutive bowl game.  He threw darts – most notably a pair of touchdown strikes to Ellington and a deep bomb to sophomore wide receiver Shaq Roland early in the fourth quarter that set up another score.

Ellington had another huge bowl game for head coach Steve Spurrier’s squad – catching six passes for a season-high 140 yards and a pair of scores.  No catch was bigger than his acrobatic, over-the-shoulder fingertip grab on a fourth-and-seven play from the Wisconsin 44-yard line – which set up a touchdown when Spurrier dialed up the exact same play call for a 22-yard scoring strike from Shaw to Ellington on the next snap.

Those two catches were as good as any “Bruuuuuuce” has made in his career … and the 5-foot-9, 196-pound two-sport star from Moncks Corner, S.C. accompanied his game-changing grabs with some Fred Astaire footwork on the sidelines.

Clowney and the Gamecock defense also bailed Shaw out of his only mistake of the game – a fumble on South Carolina’s first drive of the second half that set Wisconsin up at the Gamecock 31-yard line.

Leading by four points and dominating the Gamecocks with their bruising ground game, the Badgers looked to be in position to win their first bowl game since the 2009 Champs Sports Bowl.

White was stuffed on a critical third down play and a 42-yard field goal attempt from sophomore placekicker Jack Russell sailed wide right on fourth down.

Still, Wisconsin’s dynamic duo combined for 250 rushing yards – imposing their will on one of the SEC’s top defenses for most of the game.

With its third straight bowl victory over a Big Ten opponent, South Carolina has secured its third consecutive 11-win season.  To put that in perspective, heading into the 2011 campaign the Gamecocks had won ten games just once – in 117 seasons of football.  They’d also never finished in the Top Ten – something they are now a lock to do for the third consecutive year. 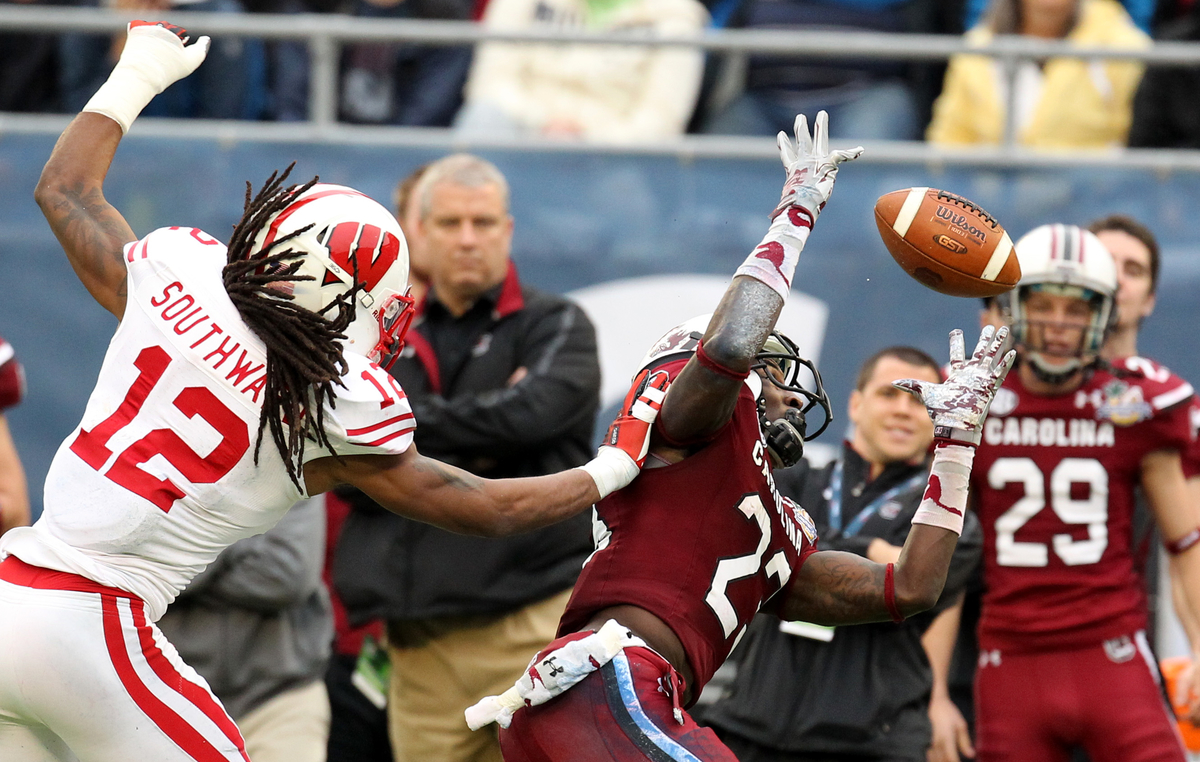 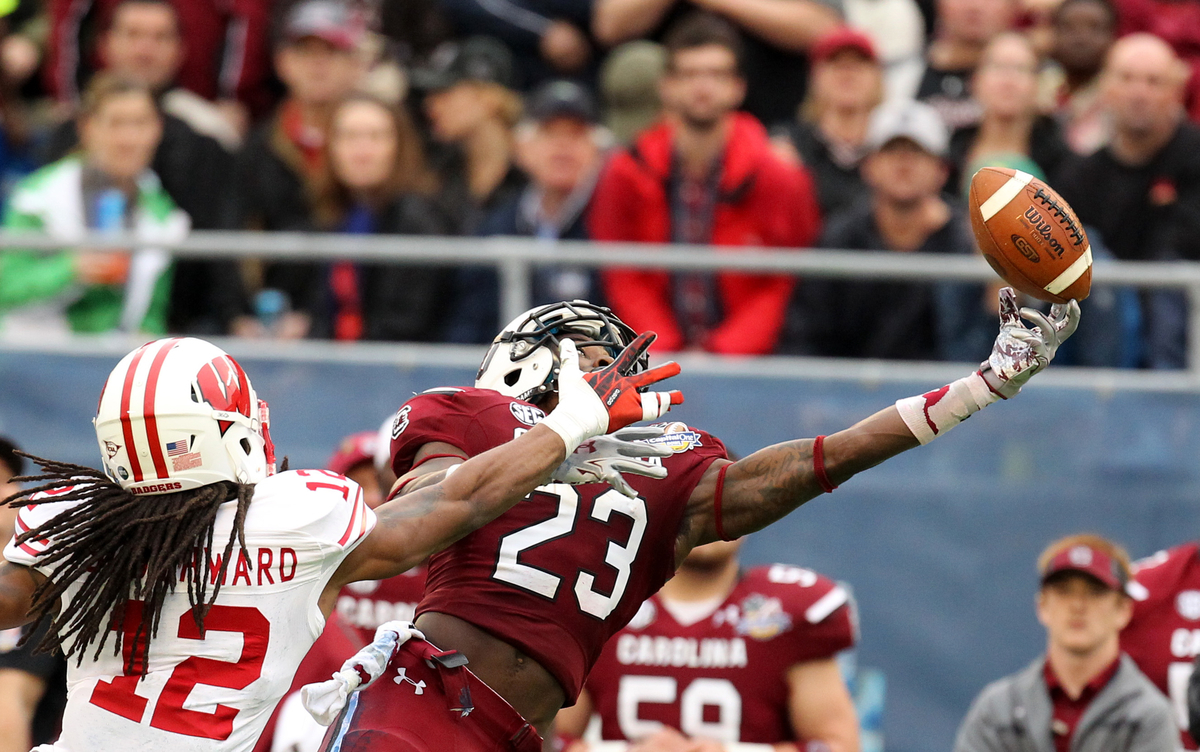 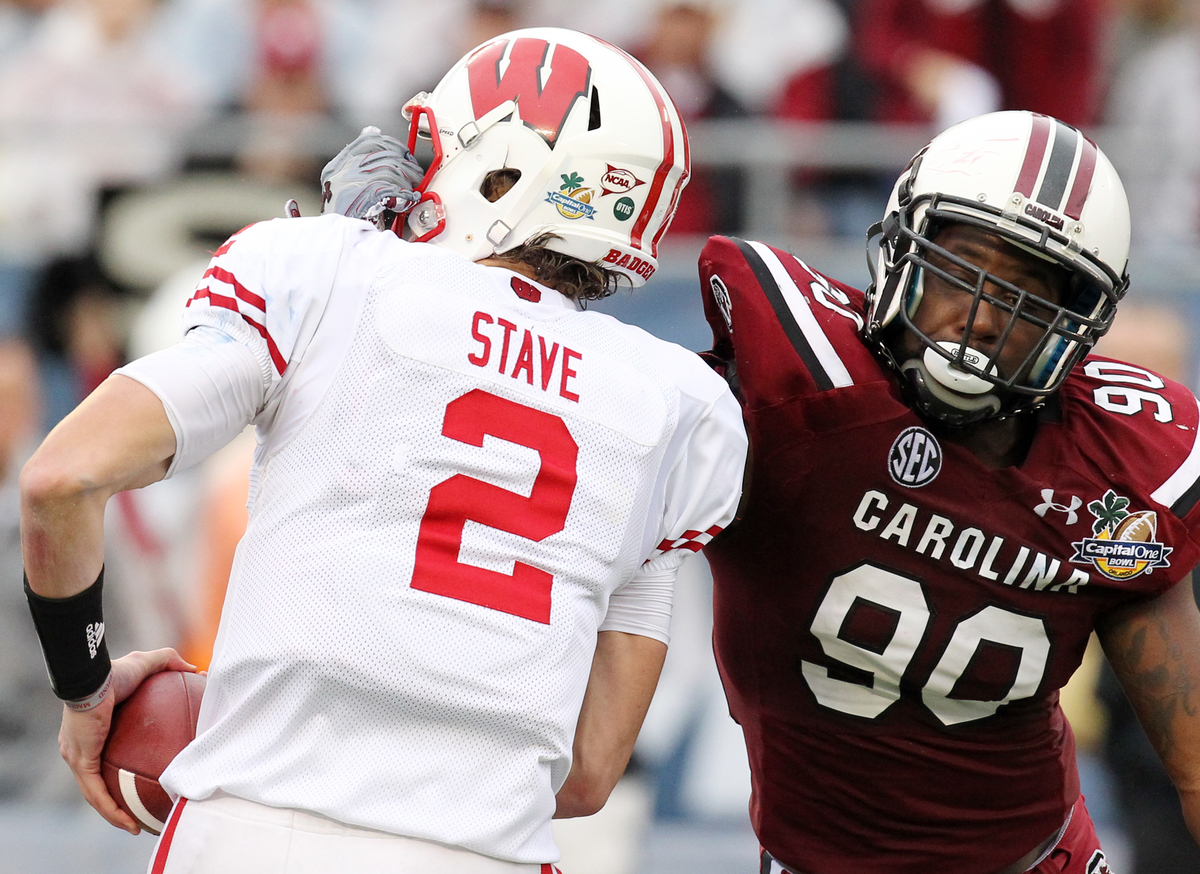 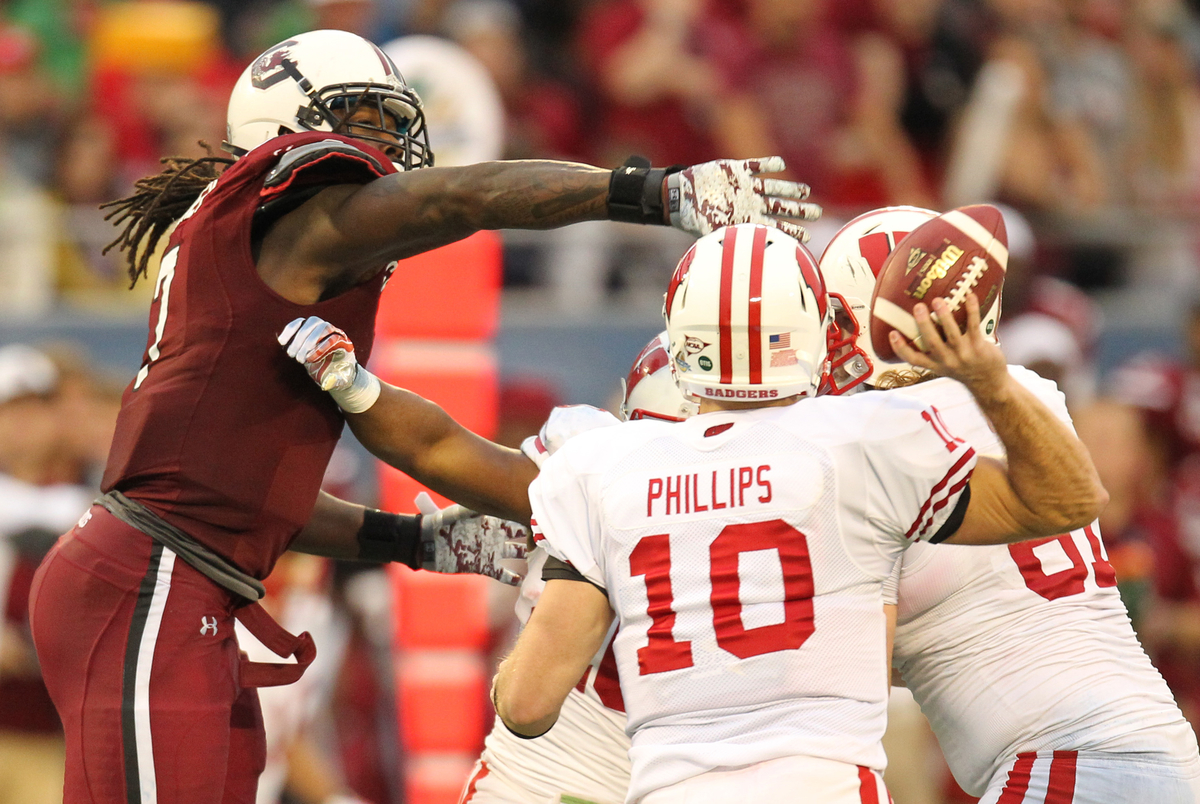 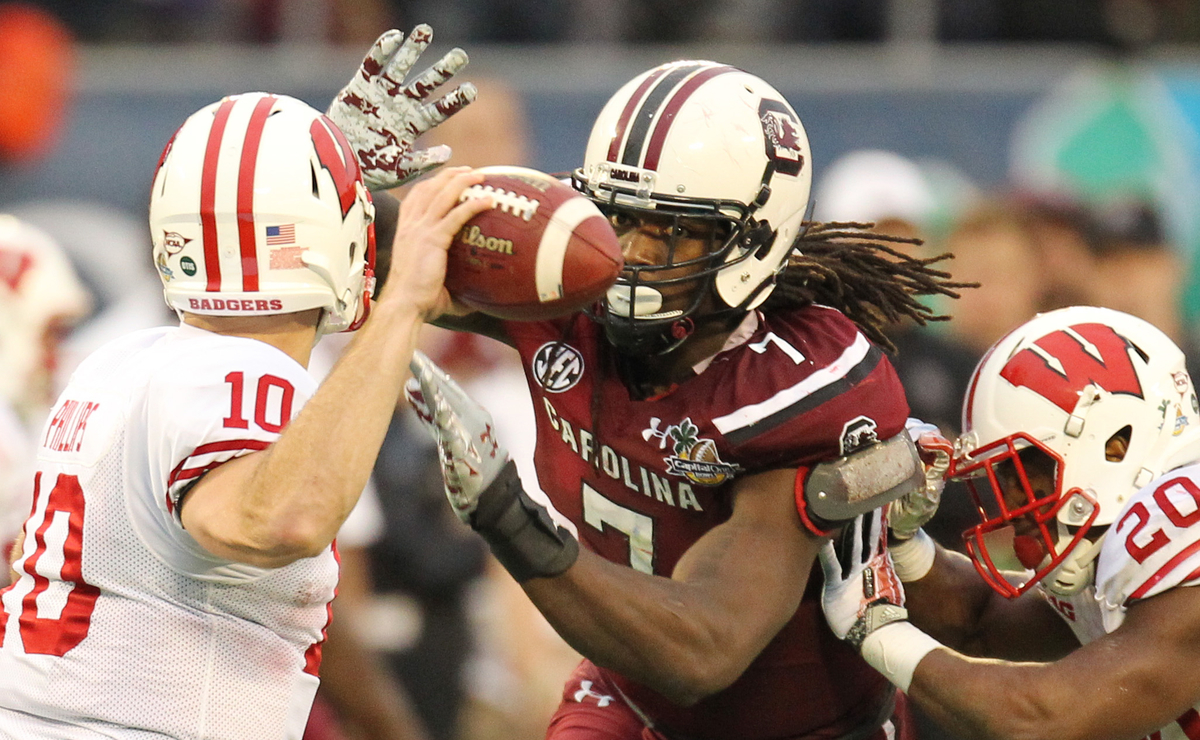 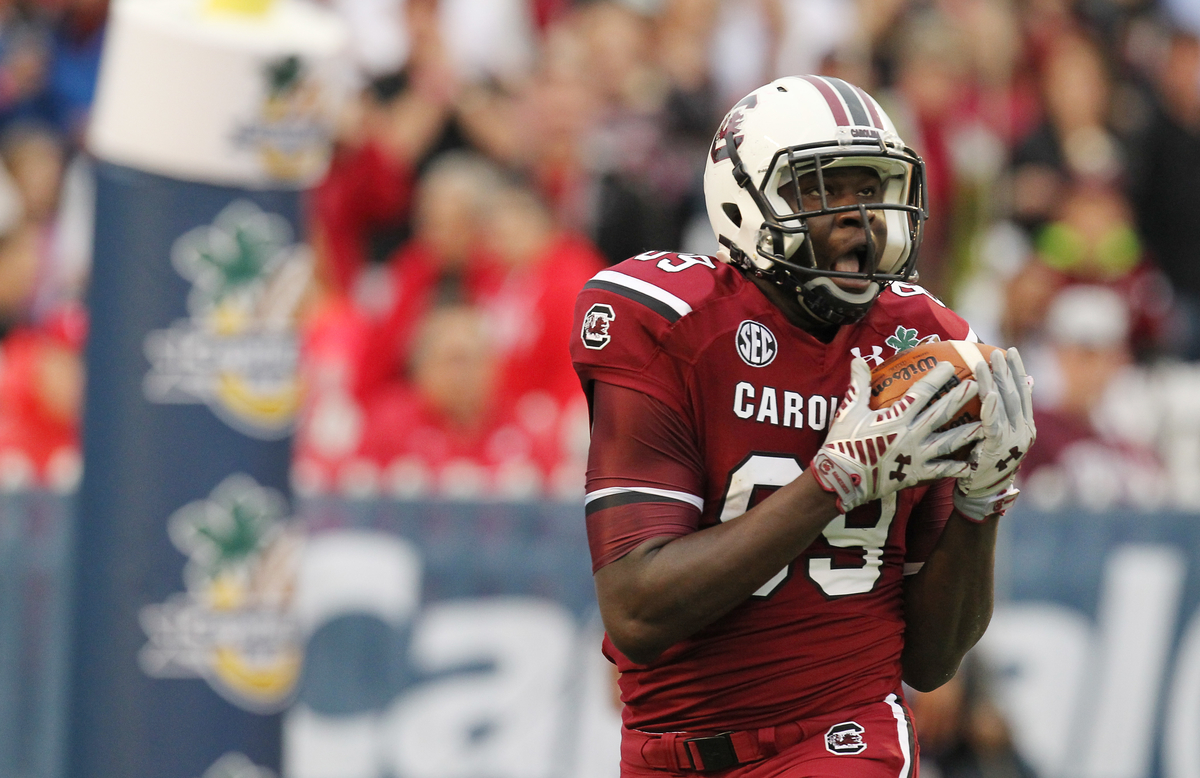 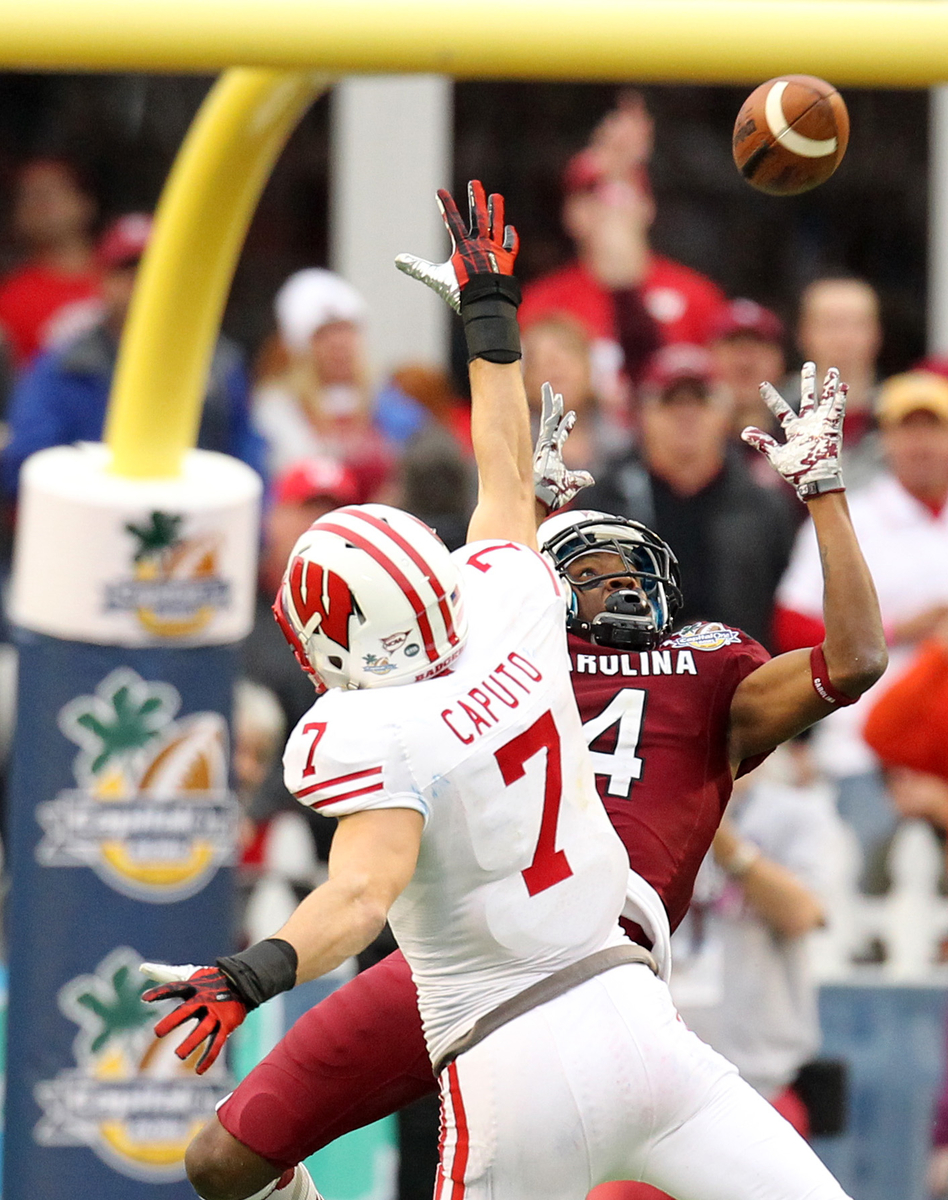 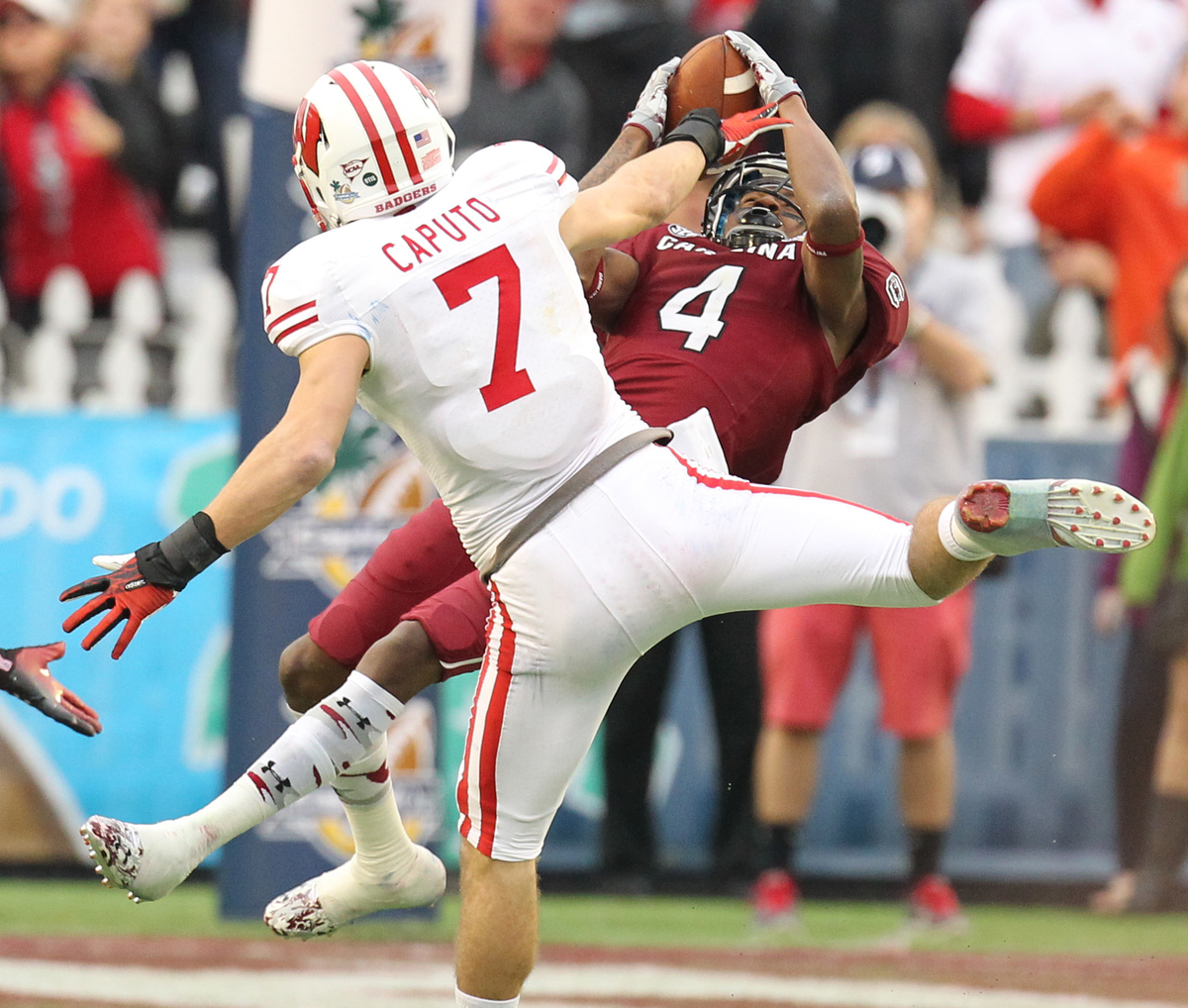 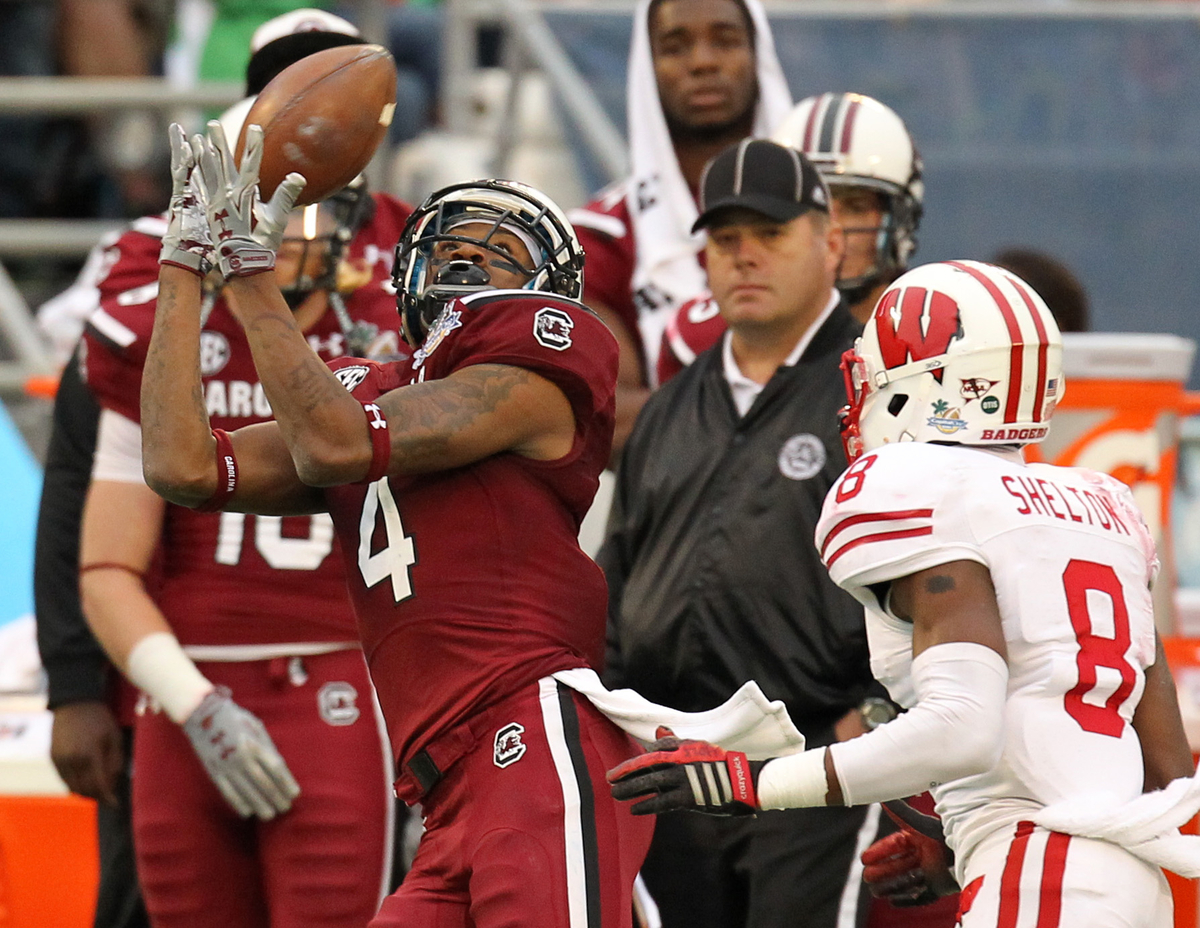 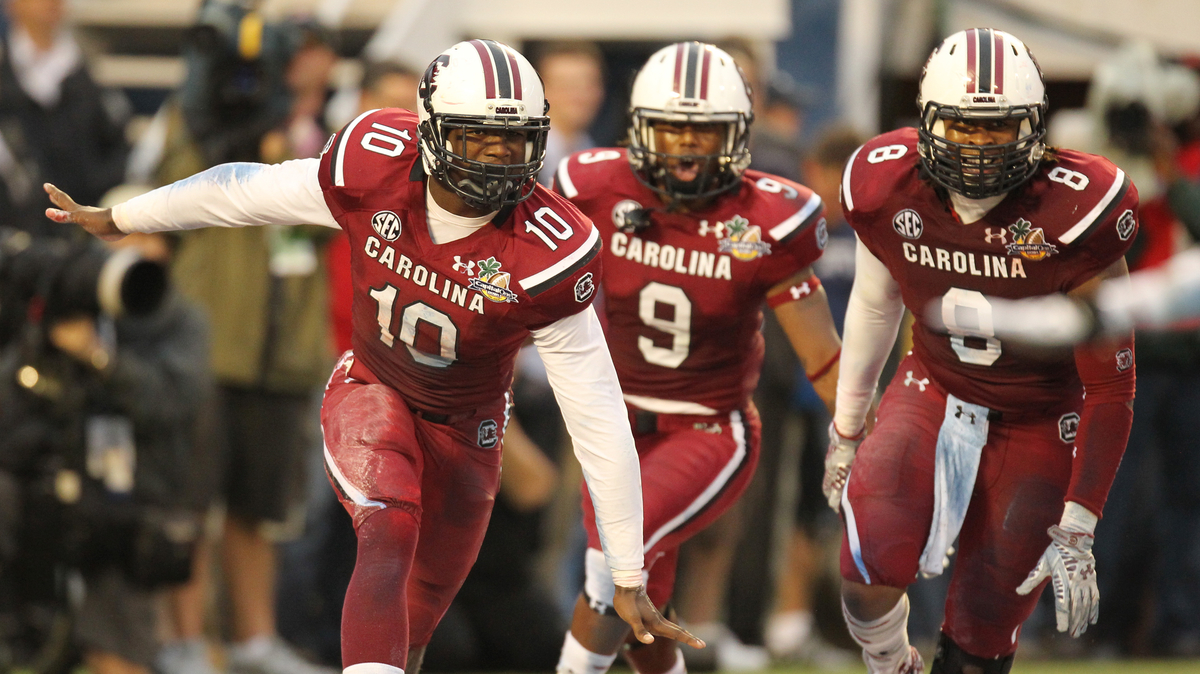 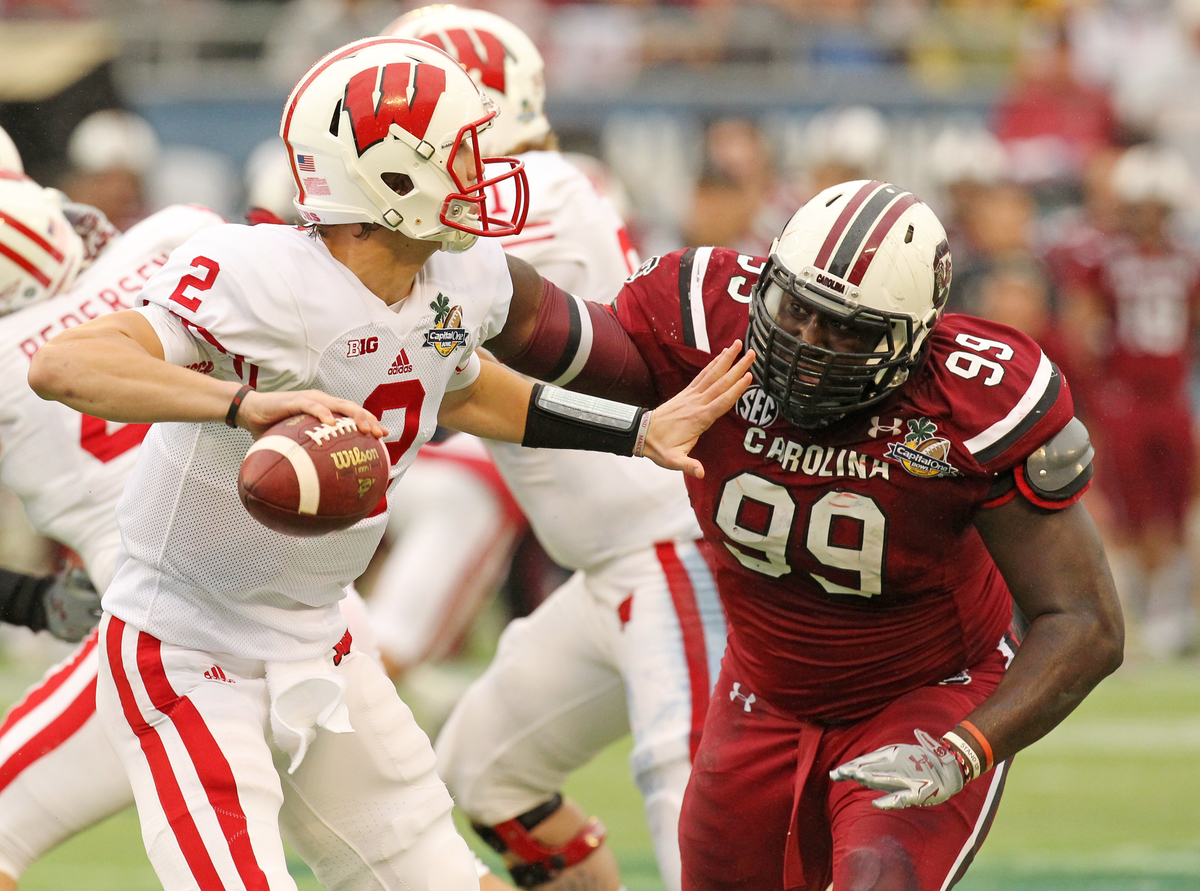 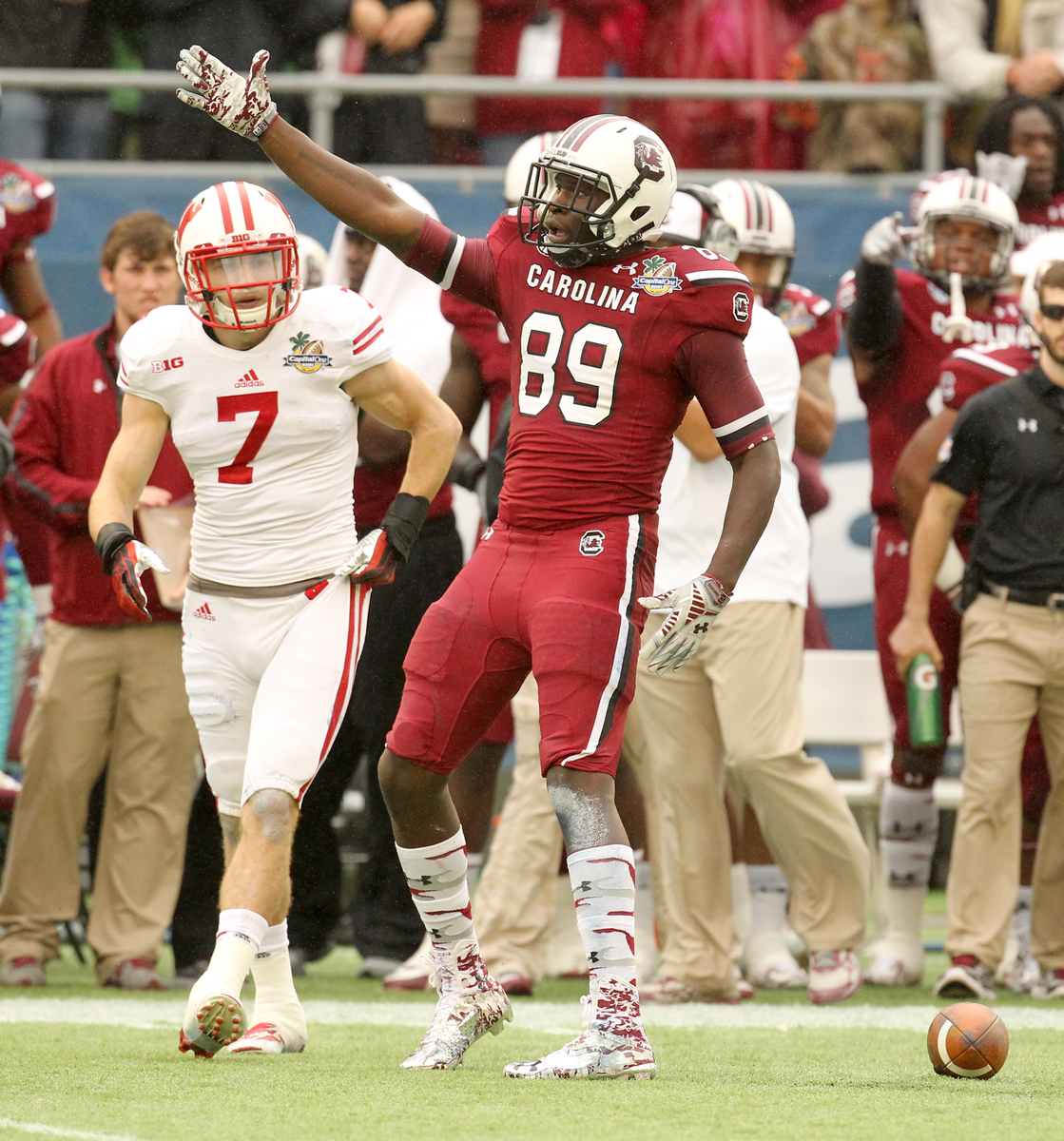 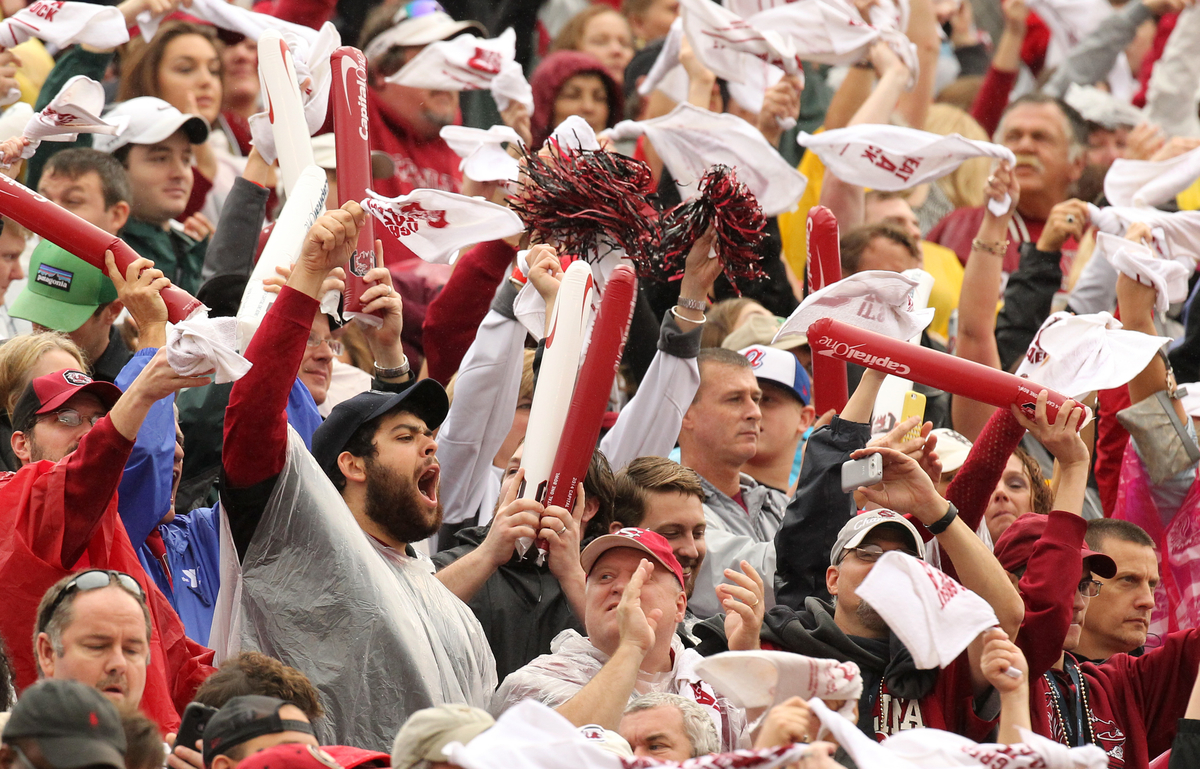 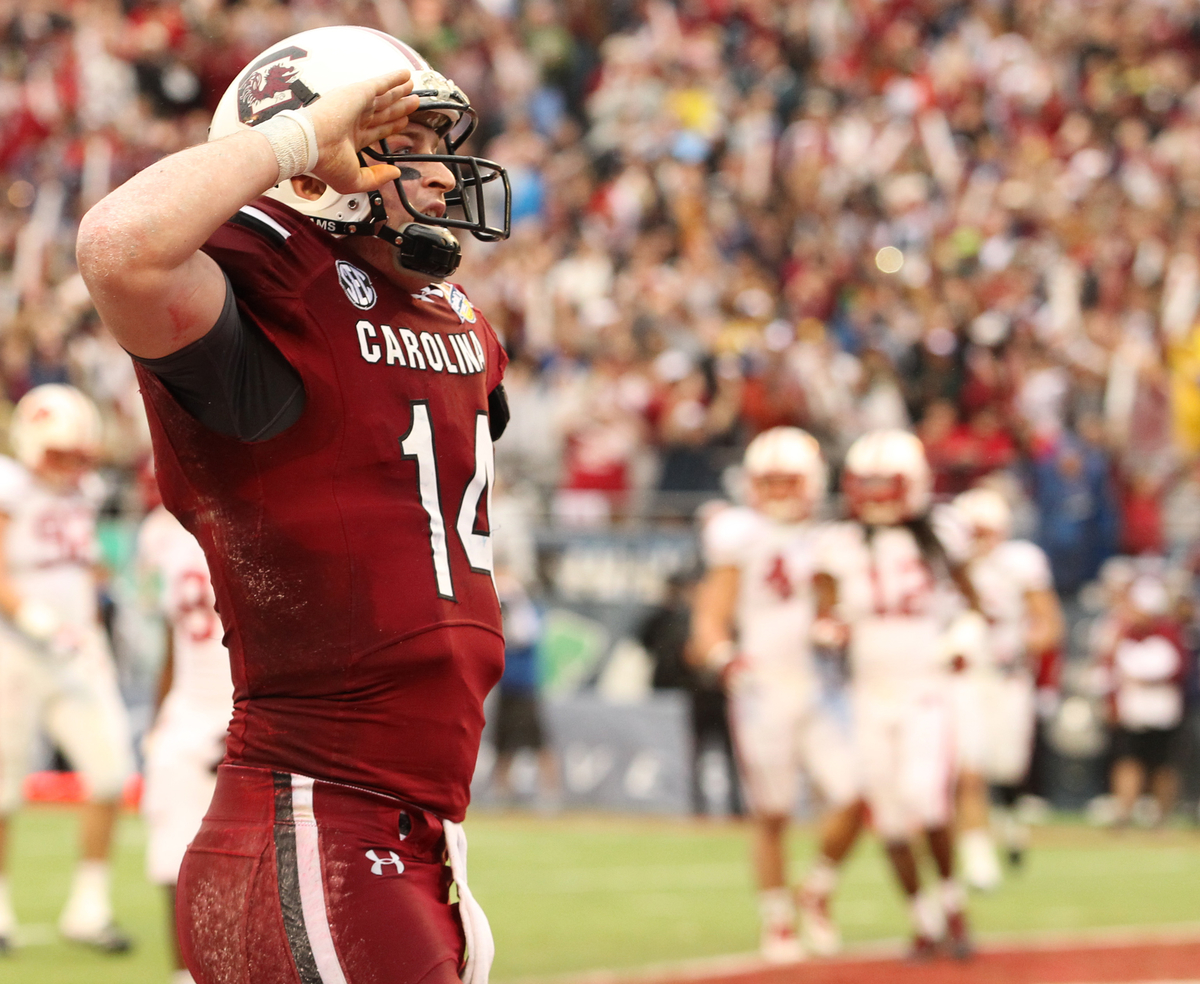 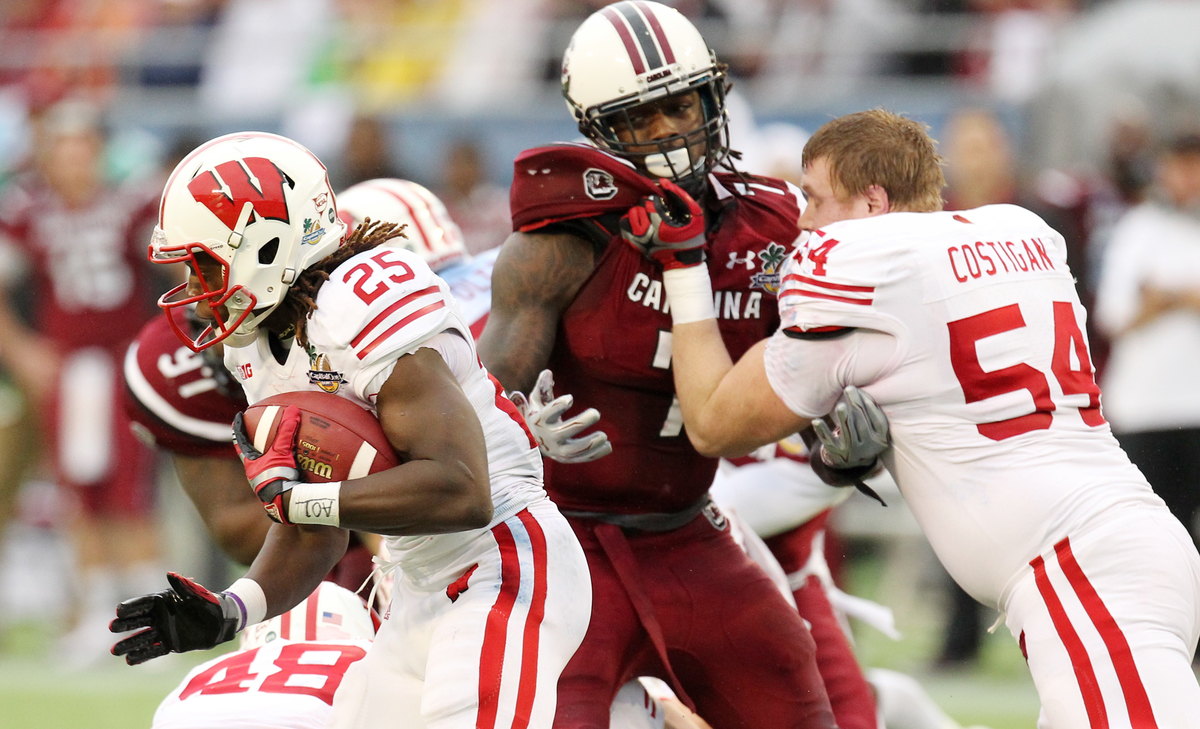 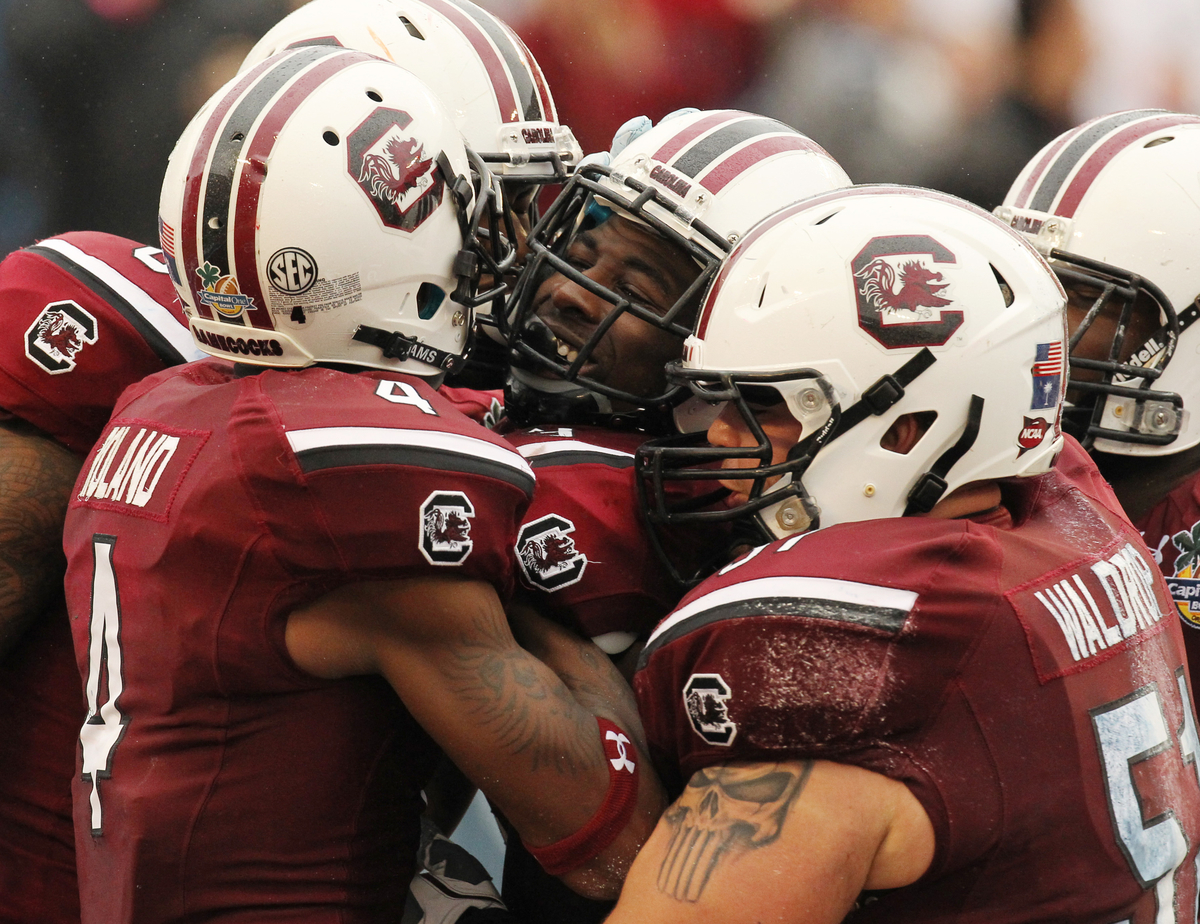 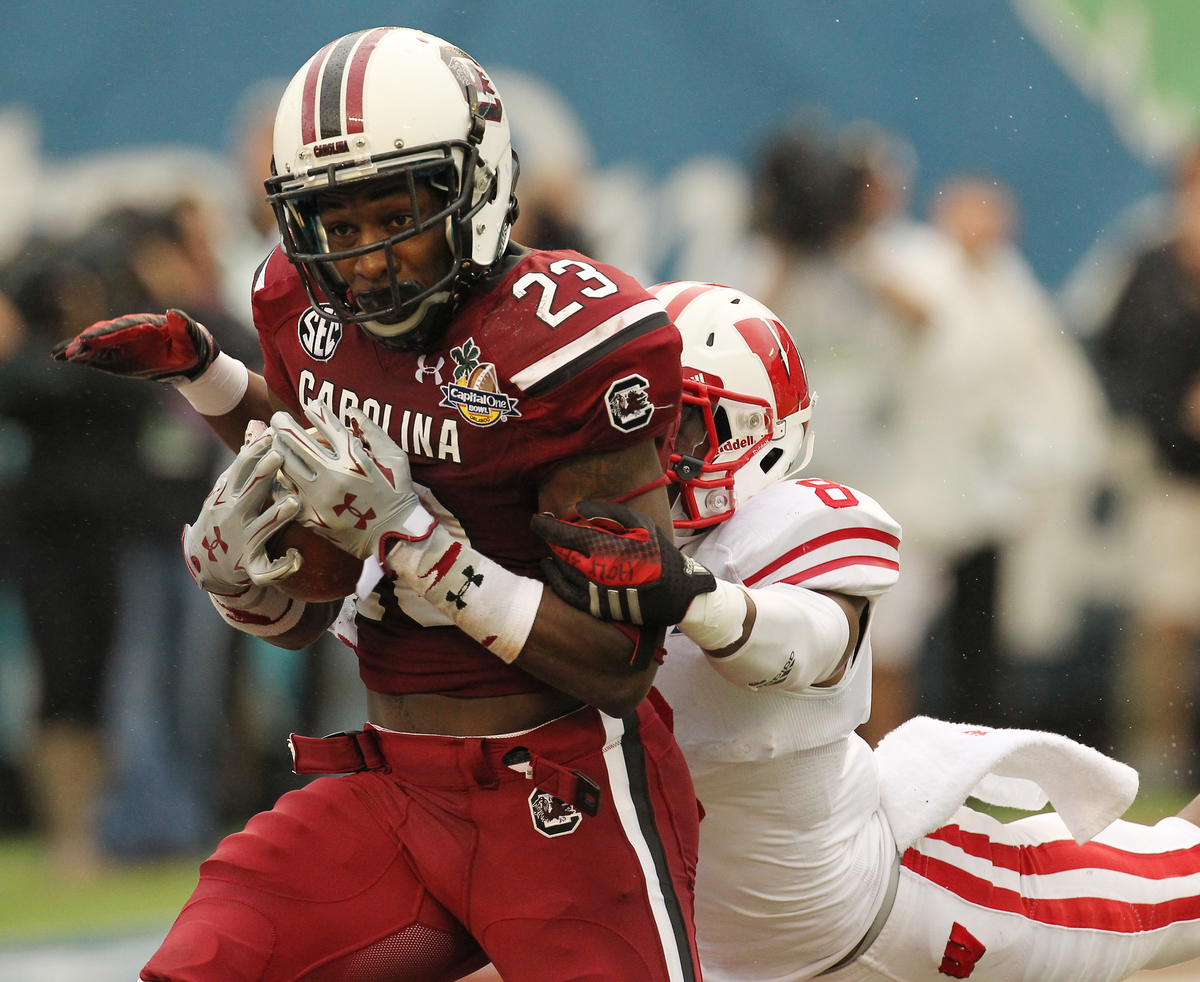 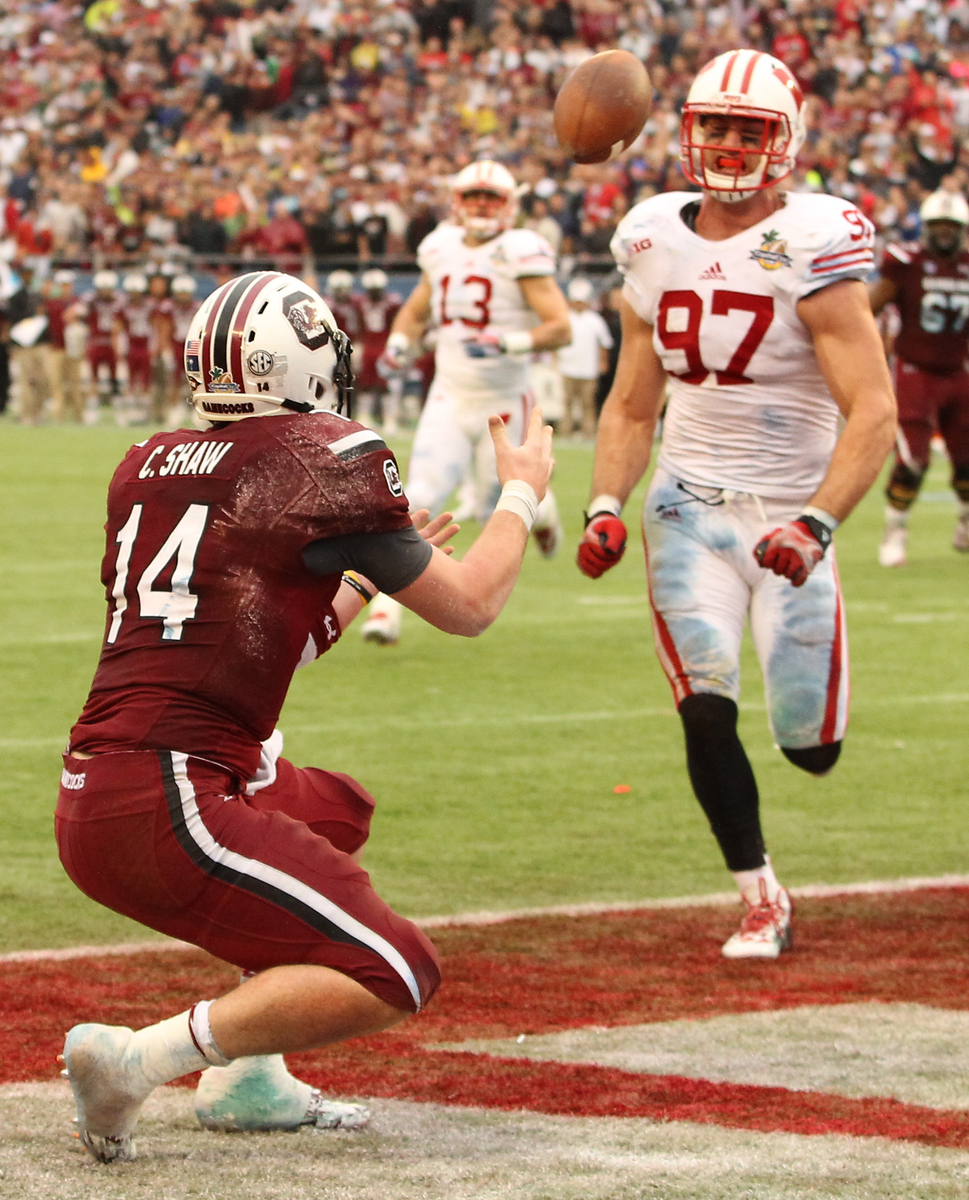 Thanks to all the past Q-B’s! Connor you are the greatest of them all. You have enough intestinal fortitude and ability to carry you anywhere you wish to go. Your ability is only exceeded by by you will! Thanks for a wonderful career young man and I certainly hope this is the start of a great future. God Bless you and your teammates!

He’s a squared-away, solid young man; you can tell by his actions and attitude on the field and off. He’ll be OK whether or not the NFL is his fate.

Connor Shaw is the man! He threw three walk in touch downs (well one of ’em was a toe tap in), ran one in (sort of – it was more of a stick it across the line) and CAUGHT a touchdown pass after throwing the ball cross field! Shaq Roland had one of his best outings. Davis’ game wasn’t great but his play kept soe key drives alive. Fat, slow, out of shape Clowney had at least 5 tackles, a couple of thrown for losses and batted the ball down at least two times. And the old, washed up Head Ball Coach engineered another 11 win season and finished int he top ten again!
GOOOOOOOO GAMECOCKS!

The ACC is looking pretty bad again…I want Clemson to keep the mediocrity going…that helps SC take most of the players we want vs Clemson and the ACC.

Also: in an exception, I would love to see FSU beat Auburn, then Fisher bolt before the ACC ruins his chances…like it has so many others…

You’re utterly pathetic… You’ll pull for an out of state ACC team who’s arrogant and character-lacking QB is likely a rapist. On the other hand, you pull against our State ACC team because you’re afraid of losing an edge to them in recruiting. Wow, confident much?! Seriously, thank God that some Gamecocks (me) aren’t still suffering from some type of inferiority complex.

Also: to imply a kid is a rapist, who was cleared, makes you a filthy dirt bag, who should be charged w/ libel. You are more of a criminal than the kid who kicked your @$$…

Seriously, just STFU. You clearly don’t know crap about libel laws to espouse that I could be charged with such by implying that he was a “likely” rapist. But more importantly, I’ve probably got more athletic ability (and accomplishments) in my pinky than you in your entire and probable whalish body. And one thing I’ve learned in my own athletic accomplishments? That when you are talented, work really hard, and thus win often, that you don’t have to constantly belittle your competition. In fact, those that do that are typically just losers (uh, you) who are just envious. So please, just crawl back under your rock.

OJ Simpson had more athletic accomplishments than a lot of people…you’re probably as F*#kin worthless and criminal as he is…At any rate, you sound like an ignorant F@*k trying to argue your superiority on an anonymous discussion forum, and using your claimed athletic prowess because I P!$$ slapped your stupid @$$, with reality…

And I said you SHOULD be prosecuted for libel, if the laws did not protect the GUILTY including pieces of $#!* like you…Accusing a kid who was cleared, just because he beat the F*#k out of your joke of a football team…That’s disgusting….

Dan who? Get real… 3 straight 11-win seasons in the country’s best conference seals the deal. As such, there are no close seconds. But yeah, Dan was the best former Gamecock, Denver coach.

Do you think, Conner Shaw is gonna play in two Super Bowls?

The best QB, ever at SC! And there have been many greats. But with Shaw, we should also say Clowneysome and Ellingtonsome and severalothersome.. although they are harder to say.

He gets hurt regularly in college, they hit even harder in the NFL.

Hahaha, sucks to be you Orange Boy. Regularly is not accurate, but even when he is hurt, the back-up beats your beloved Tigers. Good luck against OSU. High Five!

They may not always be the best they seem to play harder than any team I watch year after year.

I hope Shaw makes it on with an NFL team, but I doubt it. The pros are a different beast, where you have to have both an amazing drive and an insane amount of talent. Of course, I don’t think Boyd will pan out either. I’m just glad Shaw won’t be playing against Clemson anymore. Sure, Clowney is a beast and will be a top 5 pick, but Shaw absolutely killed us (especially this year). I’d rather see Clowney for 5 more years than Shaw.

SC is better than I thought this year – and it pains me to say it, but they’re probably top 5 or 6 in the country. I’d rather play Auburn (minus their lucky horseshoe) than SC or Alabama. Heard an unbelievable statistic – SC has more wins in the last 4 years than in the decade of the 90’s! The old douchebag is a hell of a coach…….

By the way, I heard Shaw may pursue a military career. If I was in a foxhole, I want that tough SOB with me!

Helluva arm to throw grenades with, I suppose.

Tebow had loads of talent but couldn’t cut it in the NFL. I hope Shaw gets a good shot at it, but I think he’ll land on his feet in whatever he pursues. He’s a real leader.

You cannot lick our cocks!!

Go Gamecocks! Thank you to everyone on the 2013 team for a great season. I am so proud of you. I had so much freakin’ fun this year watching you guys put on a great show.