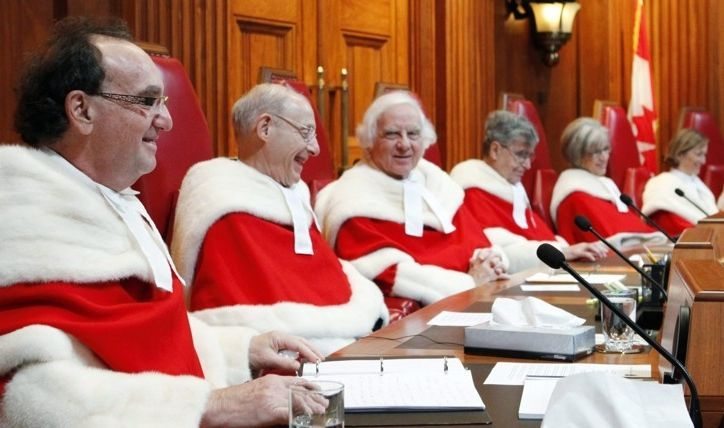 Citing safety and public health considerations the Supreme Court of Canada (yes, they all dress like Santa Claus) has struck down the nation’s ban on prostitution.

“Parliament has the power to regulate against nuisances, but not at the cost of the health, safety and lives of prostitutes,” Canada’s chief justice Beverley McLachlin wrote for a unanimous court. “The prohibitions all heighten the risks. . . . They do not merely impose conditions on how prostitutes operate. They go a critical step further, by imposing dangerous conditions on prostitution; they prevent people engaged in a risky – but legal – activity from taking steps to protect themselves from the risks.”

The ruling was issued on a suspended basis for one year – giving the Canadian legislature time to amend the country’s laws.

“While some prostitutes may fit the description of persons who freely choose (or at one time chose) to engage in the risky economic activity of prostitution, many prostitutes have no meaningful choice but to do so,” she wrote.

This website has repeatedly argued in favor of the decriminalization of prostitution.

“The most important reason we can think of to legalize prostitution is that its ongoing criminalization represents an encroachment on individual liberty,” we wrote last fall. “Simply put: If a man or woman wishes to rent out his or her body for a specific period of time – it should be their right to do that.  Government should not pass laws precluding them from such actions.”

We also believe decriminalization would raise employment and income levels while affording better health and human rights protections for women.

What do you think?  Should prostitution be legalized?  Vote in our poll and post your thoughts in our comments section below …

You know this will never happen here. It reeks of — dare I say it — progressive thinking!

Progressives are totally about the free market when it comes to sex.

How ironic that they wear Santa Claus costumes when they legalize the “Ho, Ho, Ho!”

I guess based on their get ups that this will also apply to gay prostitution – “..don we now our gay apparel…” (Glad I don’t work for A&E – I might get fired….)

I couldn’t agree more. Can’t be letting those pesky wimenfolk do with their kooters whatever they will or wish. Must take issue with “they should pay taxes like everyone else,” however. Every good freedom-loving conservative knows that 47% pay no taxes at all.

The guys and gals who patronizes them should also be listed.

By listing, that would eliminate mistresses (women who want want other wives have even if it means breaking up their marriages and making their children fatherless). Prostitutes and their clients should treat their visits as business transactions and furthermore they should have medical check-ups on regular basis to prevent STS.
Guys, it would be so much easier to stick with one person namely WIFE.

By listing, that would eliminate mistresses (women who want want other wives have even if it means breaking up their marriages and making their children fatherless).

Guys, it would be so much easier to stick with one person namely WIFE.

DO YOU HAVE ANY IDEA OF WHAT WEDDING CAKE CONSUMPTION DOES TO A WOMAN’S SEX DRIVE??!!!!!

Prostitution is legal and regulated in the state of Nevada. I wonder why there is not a push to legalize it in other state, as is being done for same sex marriage and pot?

Since abortion is legal in more states than prostitution, it appears they have that measure of control.

Prostitution should be legal. What a woman does with her vagina and my penis is no one’s business, especially the government’s. And my wife doesn’t need to know either.

Wont happen in SC anytime soon,but feel free to converse about it.

FITS is a political whore and there’s nothing illegal about that. Although it’s a crime what SC conservatives have done to the State in the past 30 years….

Especially considering they’ve really only had 20 years to do it – the State House changed hands in 1994-1996.

Tax ’em, inspect ’em, regulate ’em, and decriminalize ’em. Shoot, our governor would probably provide tax incentives to large brothels if they promised to hire locals. We already know she’s in the business (so to speak) of play for pay. She got a speaking gig at the RNC in exchange for selling out the port in Charleston.

Well those Canadian Judges seem to be a happy bunch………

More than can be said for their South Carolina counterparts

But you won’t get the right wing-nuts of the TEA party go along with it even though they tout individual freedom all damn day long.

We should probably bring back slavery too. I mean if you can sell sex, why can’t you sell yourself into slavery? Maybe we need to allow the sale of organs too. I can see getting a loan using your kidney as collateral. If you don’t pay, the repo man comes to get ya.

Good for Canada!!!! Why should it be illegal to sell something that is perfectly legal to give away?

Exactly. Just like you can give away a baby, why not be able to sell it? Amirite?

Baby’s are sold all the time….just not above the table.

Oh wait, that is the same as prostitutes.

In Germany you can purchase the all day pass (got one last summer for 120 Marks, it was great, spent a week in Frankfurt with the girls, do as many of the girls as you can in one day; cool? We need that here in South Carolina. Like gambling, its a health issue but still and most importantly, the Polizei get theirs too, pussy and kickbacks; the Germans got it figured out. What would Nikki do?

Since Marks haven’t been legal currency in Germany since 2002, I’m calling BS on your story.