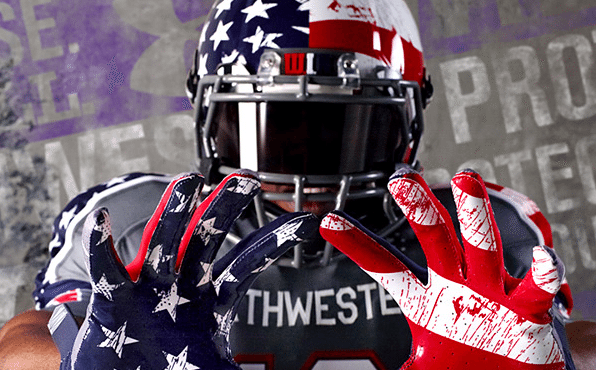 We used to be down with the “Red, White and Blue …” you know, like our intrepid guest columnist Brocephus Jones.

We live in an “Evil Empire,” people … one simultaneously bankrupting and spying on its people the name of perpetuating its crony capitalist, welfare statist, global interventionist definition of “freedom.”

Accordingly, we hope the maize and blue of Michigan – no doubt licking its wounds from last weekend’s loss to rival Michigan State – stomps all over the special “Red, White and Blue” uniforms Northwestern is wearing this weekend.

Seriously … if the Wildcats (4-5, 0-5 Big Ten) are going to put this offensive flag on their uniforms we hope they get “desecrated.”

And yes … we know these are “Wounded Warrior” jerseys. Our beloved South Carolina Gamecocks lost to Florida in similar threads back in 2009. At this point, anybody who enlists in the U.S. Armed Forces has to know they are not fighting “for our freedom.”