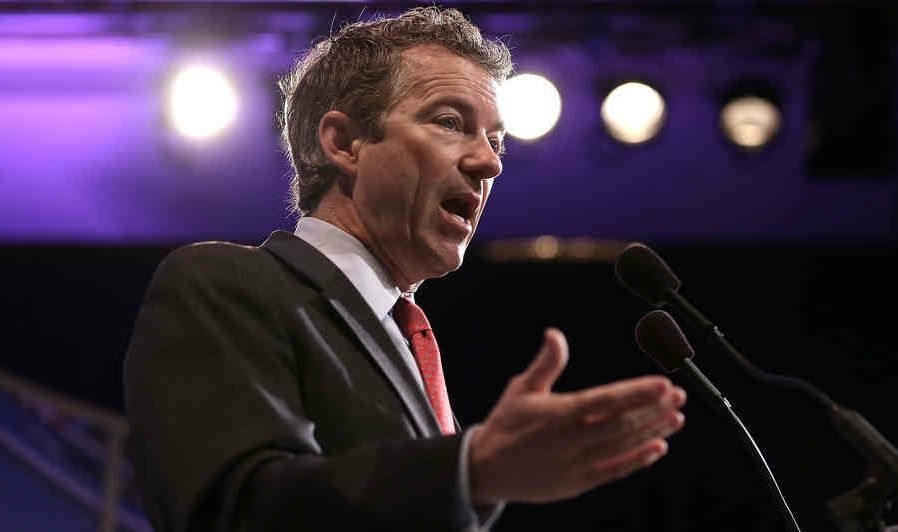 U.S. Sen. Rand Paul will return to South Carolina next month to address an invitation only gathering of establishment Republicans.

Tax expert Dan Mitchell of The Cato Institute and lobbyist Rick Berman are also listed as speakers at the gathering – which will be held at the exclusive Harbour Club in downtown Charleston, S.C.

This website enthusiastically endorsed Paul’s father for the 2012 GOP presidential nomination – although it’s become increasingly clear to us over the last few months that this particular apple has fallen a good (and growing) distance from the tree.

In fact Paul’s spring to the middle of the collapsing “Republican” Party has featured endorsements of former GOP presidential nominee Mitt Romney and GOP Senate “leader” Mitch McConnell – two of the poster politicians for the party’s inexorable decline.

We understand that Paul wants to be president in 2016 … and we honestly believe he has the potential to excel in that role. However, we would humbly submit that the best way for him to do that is to rid himself of the rotting corpse that is present day “Republicanism” and champion a third way.

Same goes for Ted Cruz … another Republican presidential wanna-be who is also stumping in South Carolina next month.

“This website enthusiastically endorsed Paul’s father for the 2012 GOP presidential nomination”
“Enthusiastically”?!? The word is “sycophantically” or in Paul’s case, “suckafannitcally”

“…although it’s become increasingly clear to us over the last few months that this particular apple has fallen a good (and growing) distance from the tree….”
What gave you the clue, the fact that he’s sane?

Serious questions, Colonel. You have a great deal of vitriol when it comes to
Ron Paul. Yet, you, he and TBG seem to agree on many things.

1) Name one political figure who’s views are more in synch with yours than Dr. Paul’s are.

I can’t stand Ron Paul on some social/fiscal issues, but he does a lot of good in Washington regarding what I do like about him. At the very least, he’s far more trustworthy than most in Congress.

Rand, however, is entirely different. Can hardly stand him on 95% of things.

Paul has written several books on the gold standard and is supposedly an expert on the subject but damned if you could prove it by me based on his fiscal policy ideas.

2. No hate, I just love to poke “Paulanistas”.
Really, I think the guy was probably a great doctor, he was probably a pretty good Air Farce occifer but he’s a joke as a national political candidate on the order of Ross Peerow.
If you look at his legislative accomplishments you discover that there were none: exactly 1 of his 600+ bills actually made it to law. While some of his ideas do align with mine, his naiveté in international affairs is stunning. He has no real business experience (yes he was a doctor in a private practice – with a practice manager who made most of the business decisions). He has no real leadership experience (yes, he was an Air Force Officer but he was a doctor not a platoon leader or a commander).
He has no real political center, changing from Libertarian to Republican as the political winds shifted around him. He’s a closet racist and refuses to own the stuff published in his newsletter. I think Rand is a better option than Ron seven days of the week and twice on Sunday and he still isn’t a prize.

TBG prefers to be referenced as a “Ronulan” instead of a “Paulanista”.

Agree with you on Thomas Jefferson…although he and Paul are politically, pretty similar. TJ more likely to “get down wid da brown”, perhaps?

Should have asked for a living politician.

While we are in total agreement that Dr Paul is not a charismatic leader, nor has he had much legislative success…TBG was more interested in specific policy positions where you and Dr Paul differ, and why.

The reason TBG inquires is that you usually give well thought out, coherent answers, often citing history, personal experience etc. TBG has encountered many people in his life who claim to agree with Paul on “90%” of the issues….but on one issue think he is “just nuts” and thus they refuse to consider him. They then vote for someone who they admit to disagreeing with most of the time.

I’ll give you a couple of living guys worth a look:
Jeff Flake – Senator from Arizona, makes “McPain” look like what he is, a liberal.
Paul Ryan – deserves a look, it’s a shame he got hooked up with Romney.

BTW on the whole Jefferson – Sally Hemmings thing.
There is no evidence that Thomas Jefferson was the father of any of Hemmings multiple children by other fathers. All the DNA test showed was that potentially someone of the Jefferson lineage made “the beast with two backs” with someone in the Hemming lineage at some point (it could have happened at any point in history).

The chances are very good that it was Jefferson’s younger brother Randolph or one of Randolph’s five sons who liked to “taste da dark meat”. Jefferson’s views of slavery are in direct opposition to the thought that he would exploit Hemmings – Randolph was a bit of a “rake” and had far less enlightened ideals.

“Hey, Sally…you’ve a little white in you?”

Libertarians for the dehumanization of humans. Less human than human is our motto.

Rand Paul isn’t a Libertarian, or libertarian. He’s said so himself.

I am looking forward to the list of dehumanizing things that the little “L”‘s propose if that was your targeted group.

I assume that wouldn’t include leaving people alone or not taking people’s money.

If your target was the upper case “L”‘s, well then I won’t argue that they have some dehumanization going on…either way though I look forward to your calling them out on their dehumanization specifically rather than remaining obscure.

For all I care, they can all go to little l.

I have no idea what that means.

Rand Paul isn’t a Libertarian, or libertarian. He’s said so himself.

Is that a “libertarian”?

Being both is impossible.

If we are speaking little”l”, you start with the non aggression principle.

Do Republican’s adhere to the non aggression principle? No.

So Rand has branded himself two things that are in direct conflict with each other. I suppose I shouldn’t be surprised and I can’t say it’s because he’s stupid, he’s just not genuine…and has admitted fairly publicly not big on honesty. (see his recent college speech)

Anyway, I can understand the “misunderstanding”, but simply put, you can’t be both Republican and libertarian.

The selected people who will be invited to this gathering are Rep. Mark Sanford, his wife (?if they just got married) Belen, Tom Davis, Will Folks who carefully did not post her Argentine interview and other tea party voters with one track minds.

How much of his speech will be plagiarized from Wikipedia?

or from Forbes, or from This Week, or from Heritage Foundation materials, or from a Focus on the Family fundraising letter?
Got to hand it to Rand–he ain’t afraid to steal. Or lie about it later.

TBG’s been carrying this in his wallet since hearing the radio show years ago. Might as well use it , cuz he can’t carry it over to the second half…..

* TBG feels this comment is worthy of some sort of Philip Branton award…..

Looking more and more like another Democrat in the White House in 2016.

Please don’t let it be Hillary… Somebody else better run.

Given the crap candidates the GOP will put forth, I concur.

“We understand that Paul wants to be president in 2016 … and we honestly believe he has the potential to excel in that role. ”

If “excel” is buy the establishment more time to further screw things up while duping people into thinking there will be substantial change, well then I agree.

I voted for Ron Paul in the Presidential SC Primary.
But, his son: Rand, is just too far right to make even a small amount of common sense.
Looks like the apple soured when it fell from the tree.