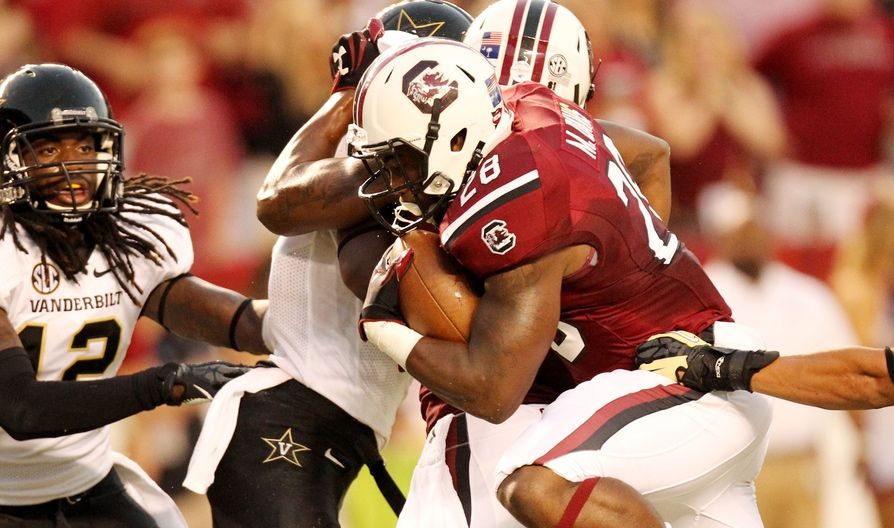 Davis, a 5-9, 215-pounder from Lithonia, Ga., leads the SEC in rushing halfway through the season. The sophomore back is averaging 123.7 yards per game on the ground, the nation’s 10th-best mark. Davis is second in the league in all-purpose yards (154.5) and is tied for first in scoring (9.0). He has five 100-yard rushing games in six outings this season, with three runs of over 50 yards.

Cann, a 6-4, 314-pounder from Bamberg, S.C., is the leader of the offensive line. The junior has helped the Gamecocks average 487 yards of offense per game, nearly 60 yards better than the school record of 429, set in 1995. Carolina has used a balanced attack, averaging 226 yards on the ground and 261 through the air.

Quarles, a 6-4, 298-pounder from Hodges, S.C., leads the Gamecocks with 4.0 sacks and is second on the squad with 5.0 tackles for loss among his 15 stops. The junior has also been credited with two quarterback hurries, a pass break up and a fumble recovery.

Clowney, a 6-6, 274-pound junior from Rock Hill, S.C., has seen his stat line limited this season, but has been a focal point for every offense the Gamecocks have faced. A 2012 unanimous All-American and the SEC’s Defensive Player of the Year, Clowney has a pair of sacks and 3.0 tackles for loss this season, with a team-high four quarterback hurries.

Clemson Chopped Into Oblivion By FSU