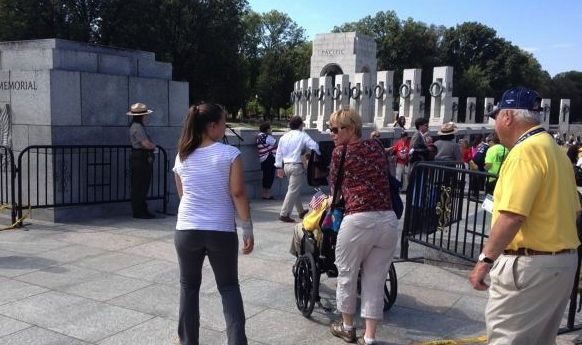 While literally dozens of Americans (maybe) lamented the loss of round-the-clock Panda-cam coverage at the National Zoo, the real shutdown drama was taking place on the National Mall in Washington, D.C.

There busloads of World War II veterans – including many in wheelchairs – stormed past barricades erected by the National Park Service, which is closed as a result of the partial government shutdown which went into effect this week.

The veterans (from Iowa and Mississippi) were in town for a previously scheduled visit to the World War II Memorial, which is located on the National Mall between the Lincoln Memorial and the Washington Monument.

U.S. Sen. Tom Harkin (D-Iowa) was on the scene, and (prepare your surprised face) blamed Congressional Republicans for the veterans’ plight. Meanwhile Congressional Republicans – including U.S. Reps. Michele Bachmann and Peter King – placed the blame squarely on the shoulders of (again, prepare to be shocked) U.S. President Barack Obama, whose Department of Interior erected the gates around the open-air monument.

King referred to the erection of the gates as “perhaps the most bitter, spiteful act ever committed by a commander in chief.”

U.S. Park Service rangers – including one veteran – refused to enforce the barricade. A spokesman for the agency later referred to the veterans as “important visitors.”

U.S. Rep. Steven Palazzo of Mississippi – who was joining his state’s delegation of veterans – summed up the “resistance.”

“It’s better to ask for forgiveness than permission,” he said prior to moving aside one of the barricades.

The Greatest #Shutdown Story Of All