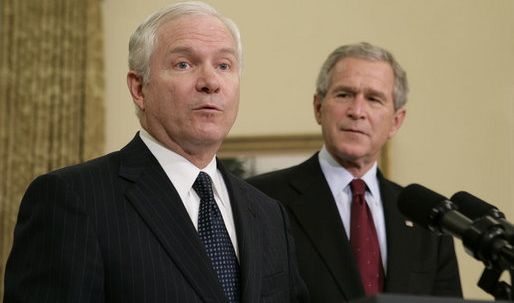 Because “bipartisanship” is the coin of the realm in Washington, D.C., the administration of U.S. President Barack Obama is trotting out former defense secretary Robert M. Gates to help cheerlead for the proposed American military intervention in the Syrian Civil War.

Gates was nominated to his post in 2006 by former president George W. Bush – and kept there by Obama until Leon Panetta was appointed in 2011.

“I strongly urge the Congress, both Democrats and Republicans, to approve the president’s request for authorization to use force in Syria,” Gates said. “Whatever one’s views on current U.S. policy toward Syria, failure by Congress to approve the request would, in my view, have profoundly negative and dangerous consequences for the United States not just in the Middle East but around the world both now and in the future.”

Actually Gates has it wrong … as we’ve noted in numerous previous posts, approving this resolution is what would have “profoundly negative and dangerous consequences for the United States.”

First of all there is no compelling national interest at stake here. This is a civil war. Period. We had no business getting involved in the first place, and we certainly have no business directly attacking one of the belligerents.

Also, America’s warmongers – including “Republicans” John McCain and Lindsey Graham – are once again basing their case on dubious intelligence. They’re also wanting us to fight alongside al-Qaeda, the terrorist network responsible for the September 11, 2001 attacks on America.

These are among the reasons why the American people are overwhelmingly opposed to this war. It’s why America’s allies are not interested in getting involved. And why our generals are expressing grave reservations. And why the Obama administration is struggling mightily to convince the U.S. Congress to approve the resolution.

Yet the warmongers press on …

“We are all for American defending its people and its interests,” we wrote earlier this week. “The national defense is a core function of government outlined in our constitution. But in no universe is intervening in this conflict – on the side of terrorist organizations like al-Qaeda, no less – acting in defense of those interests. It would, however, encroach on the sovereignty of another nation, incite anti-American fervor in the Middle East and fundamentally make our people less safe.”

Syria: Listen To This Guy