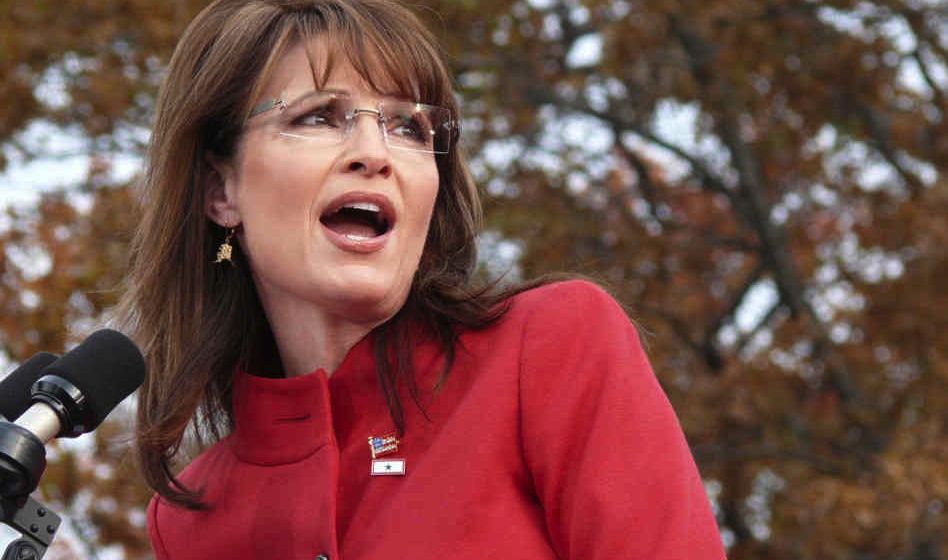 New Jersey Gov. Chris Christie – who is emerging as the 2016 presidential choice of establishment (read: fiscally liberal, neocon warmonger) “Republicans” – is being encouraged by the liberal mainstream media to do battle with the party’s intellectually incurious “maverick,” former Alaska Gov. Sarah Palin.

According to left-leaning political scribe Chris Cillizza of The Washington Post, a battle with Palin would accrue to Christie’s political benefit (assuming he doesn’t get a mite peckish and swallow Palin whole in the process).

“Taking on Palin is good politics for Christie or Jeb Bush or anyone else who is planning to run as a quasi-establishment candidate for president in 2016,” Cillizza notes, adding that Palin is viewed “as someone who is advocating a direction for the Republican party that could lead to its electoral demise in 2016 and perhaps beyond.”

Cillizza even trotted out a phrase he believes Christie should use: “I believe Sarah Palin is a voice for shrinking the Republican party, not growing it.”

Last time we checked there wasn’t sufficient substance to Palin to determine any “directional” ideology. Seriously … we’ve been literally begging her to adopt concrete fiscally conservative policy proposals for years, but she has yet to take us up on that challenge. In fact we see nothing to indicate Palin will ever rise above the level of “knee-jerk blowhard.”

No wonder Cillizza is rushing to make her the poster girl for what he refers to dismissively as “that” wing of the party – a growing confluence of fiscal conservatives/ social libertarians who do not identify with the free-spending/ liberty-decimating ideology of either major political party.

Also, the last time we checked Christie had already taken Cillizza up on his advice when it comes to going after the “right flank” of his own party – attacking fiscally conservative U.S. Sen. Rand Paul (R-Kentucky) for his vocal opposition to the federal government’s domestic spying initiative.

While no one will ever lose points attacking an enemy like Palin, we think Cillizza – and Christie – are making a broader tactical mistake here. After all “that” wing of the GOP isn’t some assemblage of far right ideologues – it is part of a growing coalition of Democrats, Republicans, libertarians and other independent-minded voters who are quite simply fed up with the policies being advanced by both major parties.

These are people who have come to recognize that the federal government is spending too much money, encroaching too far on our constitutional rights, interfering too much in the free market and generally holding this nation back from reaching its full potential.

So while attacking Palin may be good short-term politics for Christie – alienating fiscal conservatives and social libertarians is the absolute last thing he should do if he wants to become president.

Remember him? He’s the guy Cillizza spent the better part of two years promoting as the GOP’s great moderate hope in 2012. Looks like Christie is the heir apparent to that mantle … for whatever it’s worth.