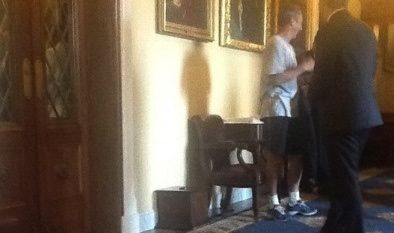 Former S.C. Gov. Mark Sanford wore a sweat-soaked T-shirt, jogging shorts and tennis shoes on the floor of the U.S. House of Representatives this week.

Why? Because he apparently didn’t hear that the U.S. House of Representatives – the chamber in which he served from 1995-2001 (and was re-elected to earlier this year) – had moved up a series of votes Wednesday evening.

Rather than trying to grab a quick shower and change of clothes, Sanford improvised.

“For the most part, he stayed sheepishly in one corner of the long hallway, hovering near one of the chamber doorways to monitor when he needed to run out onto the floor and cast his votes and trying to ignore giggling reporters,” reported Roll Call‘s ‘Heard on the Hill,’ which broke the story via one of its tipsters.

Eventually the former “Lov Guv” – who somehow managed to come back from his 2009 political implosion – donned an aide’s jacket, which only made him look more ridiculous. 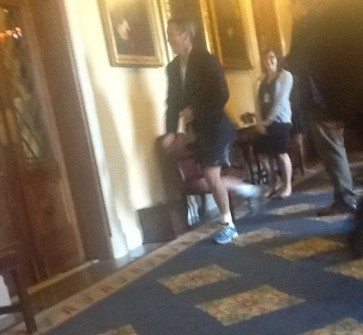 Pics: “Heard on the Hill“

Reached for comment, Sanford said he was trying to “pull a Jadeveon,” referring to the exceedingly casual attire worn by University of South Carolina superstar Jadeveon Clowney to the S.C. State House earlier this year.

UPDATE: Obviously we’re kidding about that “pull a Jadeveon” quote. Sanford knows absolutely nothing about football, as evidenced by his repeated references to getting various political reforms “to the 99 yard line.”

Related Topics:Mark Sanford
Up Next