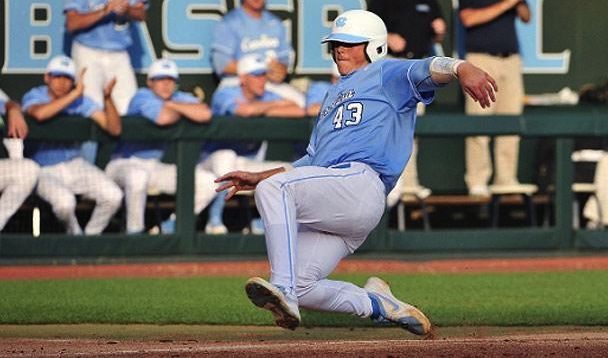 For the first time in four years, the University of South Carolina baseball team will not be traveling to Omaha for the College World Series.

The Gamecocks (43-20) coughed up a two-run lead in the sixth inning of Monday’s deciding third game against No. 1 North Carolina – falling 5-4 to the Tar Heels in the NCAA Super Regional at Chapel Hill, N.C.

Junior third baseman Colin Moran – the sixth overall pick of the 2013 Major League Baseball draft – got UNC’s big inning started with an RBI triple against South Carolina reliever Adam Westmoreland. He scored to tie the game on yet another Gamecock error, while the winning run came across the plate after a Westmoreland walk.

First-year head coach Chad Holbrook’s team – which appeared to have all the momentum following Sunday’s 8-0 drubbing of the Heels – were unable to bounce back from these miscues. In fact Tar Heel ace Kent Emanuel – a third round draft pick who struggled in UNC’s 6-5 series-opening win – nailed the door shut on the Gamecocks’ season with a pair of one-pitch outs in the ninth inning.

Under former head coach (and current athletics director) Ray Tanner, USC defeating UCLA and Florida in 2010 and 2011, respectively, to capture the school’s first-ever national championships in a major sport. Last year USC came up short against Arizona in its effort to pull off the three-peat.

While some fans might be concerned by the Gamecocks’ early departure from the postseason in Holbrook’s first year as head coach, we’re not worried. Holbrook has a young team – and his players were on the road against the top-seeded program in the country (a squad stocked with future big league stars). We’re impressed with what Holbrook was able to accomplish in his first year at the helm – and look forward to big things from his program in the years to come.