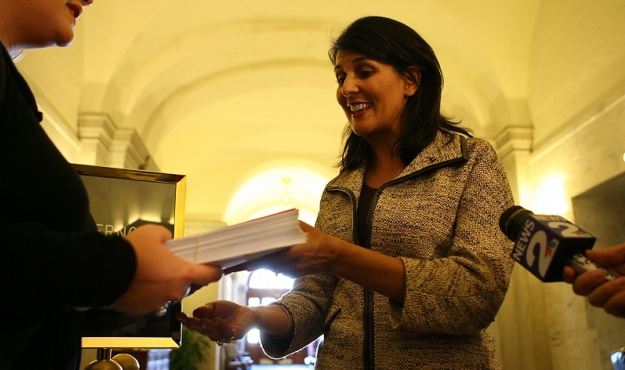 In previous years Haley has faced withering criticism from fiscal conservatives for her failure to make deep cuts to the spending plans passed by the S.C. General Assembly.

A year ago, Haley issued seventy-four budget vetoes totaling less than $60 million – or one quarter of one percent of the state’s $23 billion budget. Needless to say, that number didn’t exactly impress limited government advocates.

“If you consider one-fourth of one percent of $23 billion aggressive, then I guess that’s aggressive,” S.C. Sen. Kevin Bryant told FITS at the time. ”That number doesn’t sound aggressive to me.”

It wasn’t aggressive … in fact it was downright anemic.

Haley didn’t do much better the previous year, cutting just $213 million – or less than one percent of that year’s $22.1 billion spending plan.

Fiscal conservatives had encouraged Haley to veto more than $500 million each year.

Multiple lawmakers made their concerns known to Haley, arguing that there were now enough fiscal conservatives in the legislature to sustain larger amounts of vetoes (in order to be overridden, two thirds of both the S.C. House and State Senate must voted against it) According to several of these lawmakers, Haley has listened to their pitch – and recognizes the power she now wields in her veto pen.

We’ll see … Haley has made plenty of promises she hasn’t kept in the past.

Whatever she’s told lawmakers in private, Haley needs to put up a big veto number to compensate for her dereliction of fiduciary responsibility over the past two years. For the sake of South Carolina taxpayers, let’s hope she does just that.