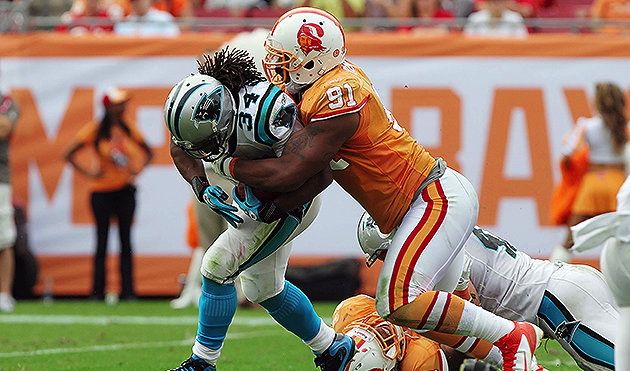 Former Clemson University football standout Da’Quan Bowers is facing jail time after being arrested earlier this week at LaGuardia Airport. Bowers had a .40 caliber Smith and Wesson handgun in his carry-on luggage shortly before he was scheduled to board a flight to Raleigh, North Carolina.

The 6-foot-4, 277-pound defensive end – who just finished his second season with the NFL’s Tampa Bay Buccaneers – is currently free on $10,000 bond after being charged with the same criminal weapon possession statute that landed Pittsburgh Steelers’ wide receiver Plaxico Burress in jail for twenty months in 2009.

Bowers, 22, did not attempt to board the plane with his gun. In fact he alerted airport personnel to the fact that he was carrying the weapon before he even attempted to enter a security checkpoint.

And he’s facing jail time for that? Please …

Don’t get us wrong … there’s absolutely no good reason to pack a gun in your carry-on bag prior to boarding a commercial flight. What was Bowers thinking? We have no idea: We went to USC, not Clemson. But regardless of Bowers’ lack of foresight, is there anything about this story which justifies him going to jail for three-and-a-half years (which is the “mandatory minimum” for this charge)?

Government is out of control in this country – waging a non-stop war against our Second Amendment rights – and Da’Quan Bowers is the latest victim of its ever-escalating ridiculousness. Seriously … no matter how dumb you think it was for Bowers to enter an airport with a gun in his carry-on (answer: very), he did the right thing in this situation by telling someone before he reached security screening.

He was responsible, in other words … far more responsible than the federal government is with its guns, we’d like to point out.

Da’Quan Bowers shouldn’t spend an hour in jail for this. No one should. In fact it is nonsense prosecutions like this one which prompt Second Amendment advocates like us to continue to call for civil disobedience with respect to all of our nation’s unconstitutional anti-gun laws.