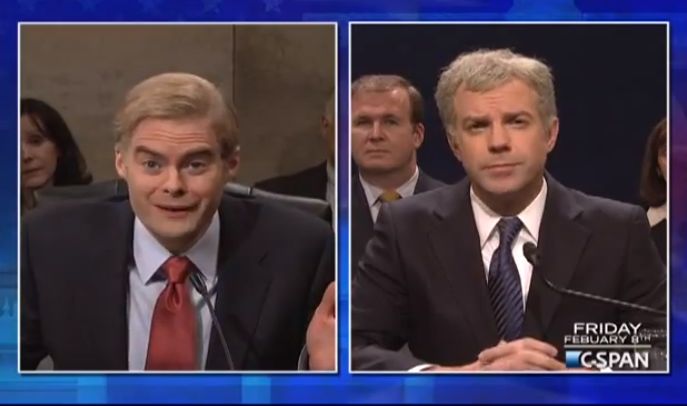 U.S. Senators Lindsey Graham (RINO-SC) and Tim Scott (R-SC) were mocked by Saturday Night Live last weekend for their excessive fawning over Israel. And while the skit never aired on television (it was reportedly pulled three hours before the show aired), neo-conservatives still have their panties in a wad over a dress rehearsal version which was posted to the internet.

In the skit Graham and Scott (portrayed by Bill Hader and Kenan Thompson) pepper U.S. Sen. Chuck Hagel (portrayed by Jason Sudekis) over his allegiance to the Jewish State – demanding to know why he doesn’t share their unconditional love of Israel.

“The subject of Israel is a very emotional one for me,” the faux-Scott remarks. “As an African-American Republican from South Carolina, love of Israel is in my blood … (tearing up) I’m sorry, I just love that little country so much.”

Later in the skit, neocon leader U.S. Sen. John McCain demands to know whether Hagel would “go on national television … and perform oral sex on a donkey” in order to ensure the survival of Israel.

When Hagel says “I don’t think so,” the faux-McCain responds “then, I regret to say Senator, I cannot support your confirmation.”

At that point, the faux Scott interrupts, “Hey, I’d do it for Israel – bring me the donkey!”

And Graham adds, “for Israel I’d do it in a second, but then again I grew up on a farm.”

What do you think of the SNL skit? Vote in our poll and post your thoughts in our comments section below …

State Of The … What Else Is On?