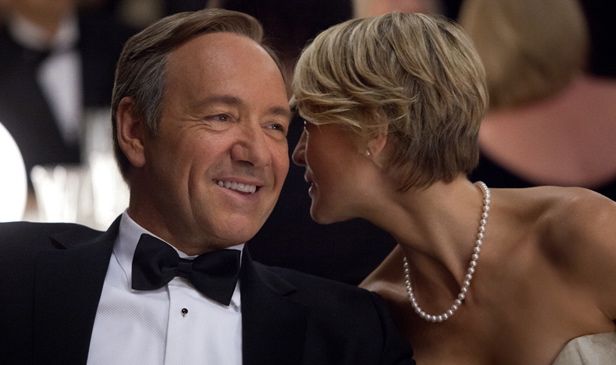 Premiering today on Netflix – which apparently has original programming now (who knew?) – is a new political series entitled House of Cards.

Based loosely on a 1990s-era British series of the same name, the web-only drama chronicles the rise of a ruthless member of the legislative branch of government – U.S. Rep. Frank Underwood (portrayed by Kevin Spacey). Joining Spacey – a two-time Academy Award winner – is Robin Wright (of Forrest Gump fame) and the lovely Kate Mara.

Never heard of this series? Here’s the trailer …

That’s pretty impressive … which is to be expected considering House of Cards is produced and directed by David Fincher (whose directorial credits include Fight Club, The Girl With The Dragon Tattoo, The Social Network, Zodiac and Se7en).

Oh … and ready for the best (or depending on where the show goes with this, the worst) part? Spacey’s character is a Democrat from Gaffney, S.C. – representing what we can only assume is the state’s fifth congressional district (which is represented in real life by U.S. Rep. Mick Mulvaney).

Anyway, we haven’t watched House of Cards yet but the series is getting rave reviews from critics …

Spacey pulls off — triumphs at — the series’ riskiest stylistic tic: At regular points in the action, Spacey’s Frank pauses to turn to the camera and address us directly. He may be offering sly commentary on what we are about to or have just seen; he may provide a tart judgment on the state of politics. The gesture could have been hopelessly showy or rapidly tiresome; instead, it seems to energize scenes that are already pretty damn zippy.

And not only is the show technically proficient, the series also breaks new ground in terms of the platform on which it is being offered.

“This is not so much a faithful adaptation as a fascinating companion piece,” writes The (U.K.) Independent. “It is also far more than simply a television series. For House of Cards, which reputedly cost Internet-streaming company Netflix $100m and which has been commissioned for two 13-episode series, is set to transform television watching. From today the entire first season was available to Netflix subscribers worldwide eliminating the need for rights deals and handing control to the viewer.”

Indeed … in fact if you’re ready to start watching, the entire 13-episode first season is available for live-streaming now.

UPDATE: Viewers who have made it to Episode 3 tell FITS Gaffney’s famous “Peachoid” (a.k.a. “Ass Peach”) plays a starring role in that episode of the show.