On the heels of the indictment of former S.C. Rep. Thad Viers on burglary and petit larceny charges, FITS has obtained a treasure trove of incriminating messages from the cell phone of his accuser – barbecue heiress Candace Bessinger.

And while the messages may not necessarily absolve Viers of guilt – they paint a damning picture of his accuser.

According to a flood of text messages sent from (and to) Bessinger’s cell phone, FITS has discovered that the mercurial blond hottie actually initiated contact with Viers (and solicited contact from him) long after she went to the police and accused him of stalking her. On multiple occasions she even hinted at the possibility of reconciling with the former Horry County lawmaker.

Yet while Bessinger kept Viers on a string, her text messages to and from others revealed the extent to which she was playing him the whole time – including a message to a donor of one of his political rivals in which she says “you will have your wish and (Viers’ alleged harassment) will be made public.”

Not only that, the text messages reveal Bessinger was engaged in a romantic relationship with this individual – who has been identified by FITS as a campaign contributor to one of Vier’s former congressional rivals, ex-S.C. Lt. Gov. Andre Bauer.

In fact there’s even one text message in which this Bauer contributor – Garden City, S.C. “hotelier” Chris Johnston – references Bessinger lying to police.

“You hadn’t told the detective the truth,” he writes.

Do not attempt to contact me again. Any further attempt to contact me in any form by you, your representatives, employees or anyone you give the #, which you shouldn’t have, will be considered harassment & all appropriate action will be taken. Again, just so we are clear,  DO NOT CONTACT ME BY ANY MEANS EVER AGAIN.

Both Viers and Bauer were candidates for the South Carolina seventh congressional district seat which was won in 2012 by Tom Rice. Viers was an early favorite for the seat, but was forced to drop out of the race after his January 2012 arrest for “stalking” Bessinger. Two months later, Viers resigned his seat in the S.C. State House.

Bauer eventually made it to a runoff election against Rice, but lost the election when S.C. Gov. Nikki Haley – who initially endorsed Viers’ candidacy – threw her support behind Rice.

Thus far absolutely no evidence has been uncovered to suggest Bauer knew about his supporter’s communications with Bessinger.

At this point, though, one thing is clear … there is much, much more than meets the eye to the saga of Thad and Candy.  How much more? Well, we were provided more than 4,100 text messages – and those are just the texts retrieved from one of Bessinger’s two cell phones. 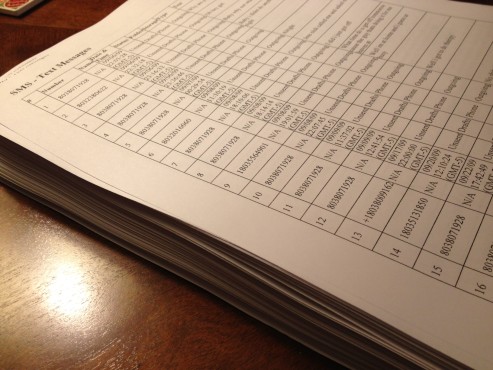 Stay tuned … obviously we will have much, much MUCH more on this story in the days to come.

The Queen Is Pissed …