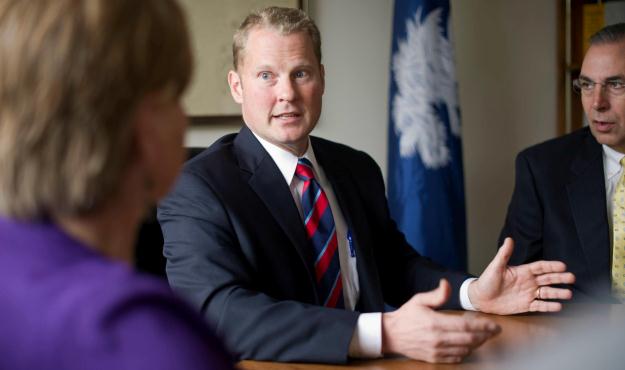 In the wake of an unprecedented state-level security breach, Bryant is questioning the excuses that have been pouring out of the Haley administration.  In fact he’s heading up a new panel that’s been charged with investigating last month’s breach at the S.C. Department of Revenue (SCDOR) – which resulted in the loss of 3.8 million Social Security numbers, nearly 400,000 debit and credit card numbers and tax information for as many as 650,000 South Carolina businesses.

“This committee is committed to digging as deep as necessary to find out what happened and what we need to do moving forward,” Bryant wrote in a recent email.

Haley thus far has refused to take responsibility for the breach – choosing instead to offer a parade of demonstrably flimsy excuses wrapped around an ever-shifting narrative.

“The facts surrounding this incident seem to change too frequently,” Bryant wrote in his email.  “We first were told that this was an international criminal and had nothing to do with internal activities or policy, but then we learned that the data was accessed with SCDOR employee credentials.”

Bryant also directly challenged Haley on her claim that “nothing could have been done” to prevent the breach.

“We were told that SCDOR could have done absolutely nothing differently to protect us,” he writes.  “We then found out, though, that not only was our data not encrypted but also that SCDOR refused a free data monitoring service offered by the state’s IT department.  When I asked the SCDOR director how much encryption would have cost, he replied ‘not very much.’  I am very displeased that we continually are discovering that not only could more have been done but also that it would have been at minimal, if any, cost.”

“Failure to do everything possible to protect taxpayer data simply is inexcusable,” Bryant added.

Bryant has attempted to get to the bottom of scandals in the Haley administration in the past – and been told to back off.

Let’s hope he is able to get to the bottom of this one without similar threats from the governor’s office.  More importantly, let’s hope that Haley eventually stops lying and obfuscating about this debacle – and finally takes responsibility (cue laughter).

No one has talked more about “accountability” in government than Haley.  It’s frankly past time she showed South Carolinians that she knows what it means.