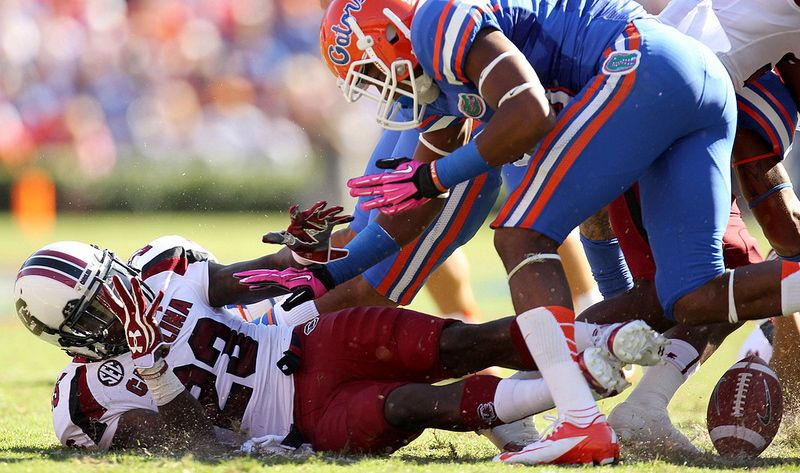 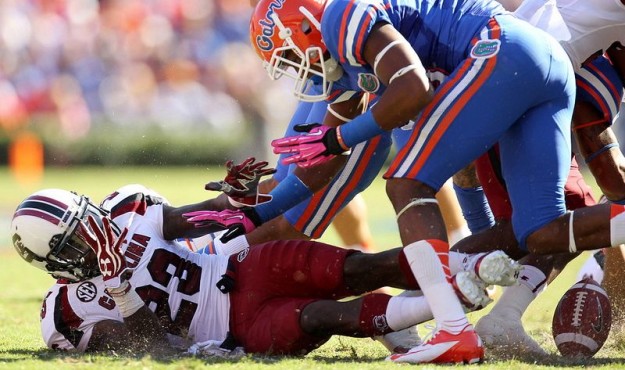 OFFENSE, SPECIAL TEAMS TURN IN ATROCIOUS PERFORMANCES AGAINST THE GATORS

By John Loveday || With consecutive losses against LSU and Florida, the University of South Carolina football team has lost back-to-back games for the first time since 2010.

Losing to LSU in Death Valley – at night – by only two points is obviously nothing to be ashamed of.

However last week’s 44-11 loss to Florida- which featured one of the poorest offensive and special teams performance in several years – is unacceptable.

It is obvious this football program is improving.  However, it is equally obvious that this program doesn’t yet possess the maturity and focus to win consistently on the road.  Thankfully, the Gamecocks are entering a four week home stretch (including a bye week) before ending the regular season on the road against Clemson.

Hopefully, this stretch will afford USC ample time to correct the offensive woes that have caused the losses over the past two weeks.

How does a team outgain their opponent in total yards (191-183) and yet still lose by 33 points? Simple … USC had four turnovers in the game, Florida had zero.  Even the casual football fan knows that turnovers are the quickest way to lose a game – particularly when you repeatedly set your opponent up deep in your own territory.

Connor Shaw has had back-to-back pitiful games. His fumble on the first offensive play of the game set Florida up on the Gamecock two yard line. Three plays later Florida would score and take a 7-0 lead. That first drive would set the tone for the Gamecock offense for the rest of the game.

Shaw was benched in favor of Dylan Thompson in the second half, however Thompson couldn’t get the offense going either as he connected only 8 of 20 passes for 83 yards and one interception.  With an abundance of talent on offense (e.g. Marcus Lattimore, Ace Sanders, Bruce Ellington, Rory Anderson, and Damiere Byrd to name just a few) there should be no reason for the lack of offensive production we are currently witnessing from the Gamecock offense.

Amazingly, for the second straight week USC was held to less than 40 yards rushing – as poor quarterback play was compounded by another less-than-impressive performance from the Gamecocks’ offensive line.

Will we see different starters on offense this coming week against Tennessee? One would hope so … because at this point the offense can’t get much worse.

USC’s defense was repeatedly placed in terrible situations against Florida due to poor offensive and special teams play – ruining what could have been an overpowering performance.  One honestly can’t ask for much more than what the USC defense gave in only allowing 183 total yards (94 passing, 89 rushing yards) on the night.

Let’s be honest, the only reason the Gamecocks’ back-to-back losses weren’t much worse has been the solid play of the USC defense.  That’s not surprising, as USC’s defense deserves the lion’s share of the credit for the success of this program over the past several seasons.

Imagine what USC could accomplish if they were able to field a similarly competitive offensive unit?

Superstar sophomore Jadeveon Clowney had another great game with five total tackles and one sack.  Meanwhile Reginald Bowens had his best game of the season with a team leading 11 total tackles.  Even with starting defensive tackle Kelcy Quarles out due to an injury/suspension, the defensive line played well most of the night.

The only reasons this grade is not a flat out “F” is because Adam Yates was 3 out of 4 on field goal attempts (one attempt was blocked).  Yates also connected on a career long 51-yard attempt to cut the Florida lead to 21-6 before halftime.

Beyond that, though, the special teams unit was terrible.  Both Ace Sanders and Damerie Byrd fumbled in critical situations, giving Florida very short fields that almost immediately translated into 14 quick points.

John Loveday is a South Carolina public school educator and sports enthusiast. Reach him via email at [email protected].