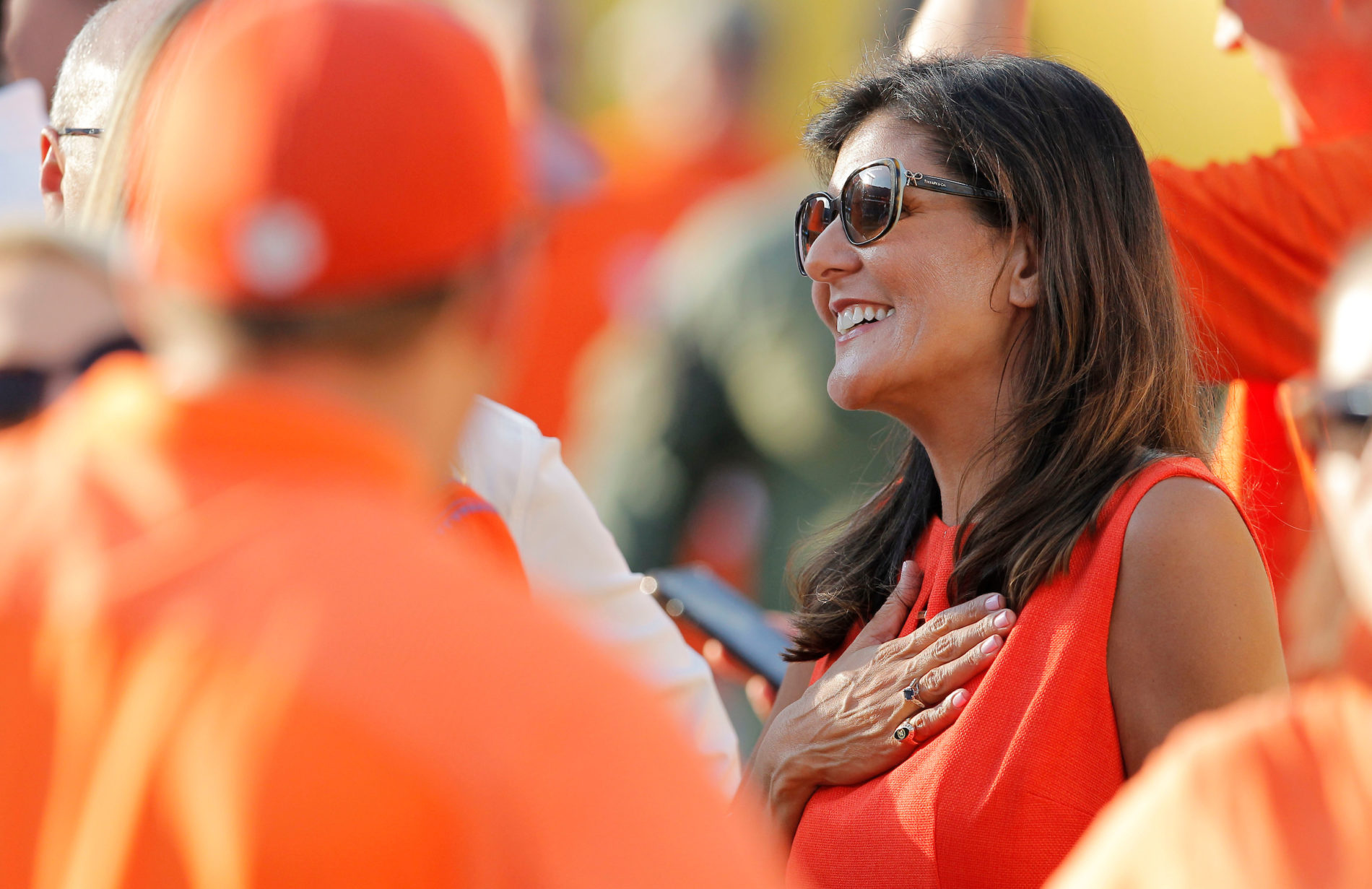 With her national political prospects looking dimmer by the day, former United Nations ambassador and South Carolina governor Nikki Haley received a big boost in her back yard this week – assuming the position she has been gifted can survive a likely constitutional challenge.

Haley, 49, has been tapped to serve as a lifetime member of the Clemson University board of trustees – one of the most sought-after appointments in all of Palmetto politics.

“Ambassador Haley’s love of country, leadership skills, commitment to education, and passion for Clemson University will serve the board well,” Clemson board chairperson Kim Wilkerson said in a statement announcing Haley’s selection. “She will be a tireless advocate for the University and all of its constituents.”

Haley succeeds former U.S. ambassador to Canada and S.C. House speaker David Wilkins of Greenville, who according to a release from the school is stepping down after serving since 2007 (including six years as chairman). Wilkins will become a trustee emeritus, the release noted.

In succeeding Wilkins, Haley would become one of seven “lifetime” members of this 13-person board – which has operated for years outside the bounds of the South Carolina Constitution.

Article VI, § 1 of the South Carolina constitution explicitly holds that “no person may be elected or appointed to office in this state for life.” That’s precisely how a majority of Clemson trustees are appointed, though, according to the will of the school’s founder, Thomas G. Clemson. In fact, the release announcing Haley’s appointment specifically noted she was “selected to fill the seat vacated by Wilkins according to terms established in the will of Thomas Green Clemson.”

So … the state constitution isn’t applicable here? The founding document which Haley twice swore an oath to uphold as governor is no longer worth the paper it was printed on?

According to that pleading (.pdf), Sloan asked a state court to rule that Clemson’s seven “lifetime” trustees were holding office in violation of the state constitution – and to “enjoin or terminate” their service. Further, he asked the court to put a stop to the self-perpetuating appointment of lifetime trustees, enjoining “any election or appointment” of trustees found to be in violation of the constitution.

Unfortunately, Sloan passed away prior to his case being resolved.

Sloan’s lawyer – Jim Carpenter – told me this week the case has been inherited by his son, John Sloan. As of this fall, it resides before the Pickens county, S.C. probate court – where it is awaiting a hearing.

Does Sloan have a compelling case against the school? Hell yes …

The other six members of the board – a minority – are appointed to four-year terms by members of the S.C. General Assembly. That process may not be pretty – or devoid of corruption – but it at least does not prima facie violate the constitution.


While Haley’s appointment to the Clemson board will no doubt revive the controversy surrounding the school’s unconstitutional governing structure, it could have national political implications as well – specifically as it signals Haley’s refocusing on Palmetto politics.

Widely heralded as a 2024 presidential contender, Haley has seen her prospects implode due to her fractured relationship with former U.S. president Donald Trump – who tapped Haley to her national post as a sop to the politician who succeeded her as governor of South Carolina, Henry McMaster.

Readers will recall Haley was a staunch #NeverTrumper during the 2016 presidential campaign, telling CNN he was “everything a governor doesn’t want in a president.”

Where did things go wrong between Haley and Trump? While there is plenty of history there, the relationship went completely off the rails a little more than nine months ago …

To say those quotes have not aged well – among broad swaths of the GOP electorate, anyway – is a colossal understatement. Which underscores Haley’s colossal miscalculation.

“Haley bet on Republican voters abandoning Trump – but instead they abandoned her,” I noted in a recent post taking note of Haley’s latest hypocrisy.

Then again, though, many conservatives had already abandoned Haley long before she turned on Trump … and for that matter, so had many of her erstwhile centrist cheerleaders.

Can Haley rehabilitate herself among GOP primary voters?

I put that question to a prominent national consultant earlier this week, and the answer was an emphatic “no.”

Still, I have declined to write Haley off as a potential presidential candidate.

“Given her identity-politik shtick and her access to neoconservative and Jewish cash, she is never going to be completely out of the equation,” I wrote last month. “However, the aura of ‘inevitability’ which once accompanied her ascendancy on the national stage has clearly lost its luster.”

I have also pointed out a hard ceiling will remain in place on Haley’s national prospects until she identifies something beyond her own ambition as a driving political force.

“Haley’s core problem is that she has no guiding principle outside of her own ambition,” I noted in a column earlier this year. “And while that is certainly true of any number of politicians, Haley is absolutely terrible at hiding it.”