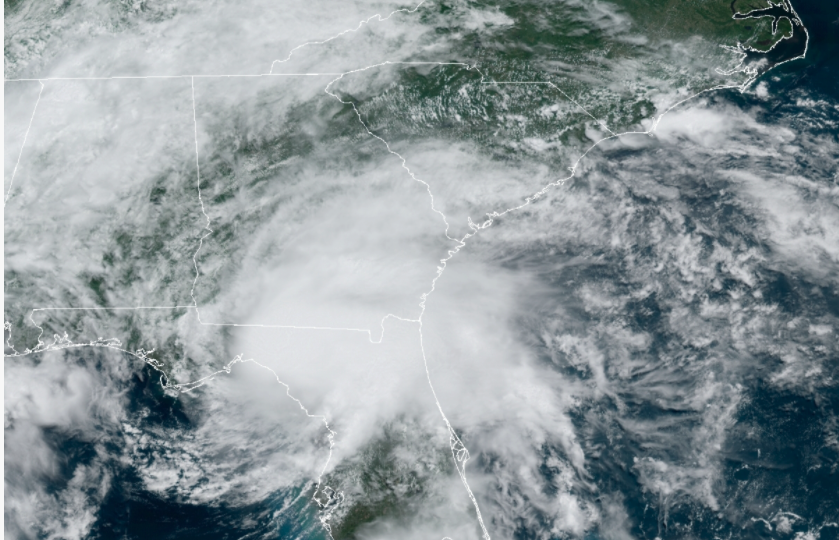 As of 11 a.m. Wednesday, Tropical Storm Elsa was spinning about 115 miles south of Jacksonville, Florida with maximum sustained winds at 65 mph, according to the National Hurricane Center. The storm made landfall along the Florida Golf Coast.

Overnight, the storm’s track shifted west, but forecasters are still predicting Elsa to weaken by the time it arrives in South Carolina later Wednesday.


“We still expect Elsa to make some mischief as it crosses South Carolina tonight and tomorrow morning,” Frank Strait of the S.C. Climate Office said Wednesday morning. “Our primary concern will be heavy rainfall with a general 2-4 inches of rain falling east of a line stretching roughly from Aiken to Lancaster.”

The worst of the rain will fall in the overnight hours. Fortunately, meteorologists say that Elsa is moving too fast to bring extreme flooding to South Carolina.

“We don’t expect any major flooding this time,” Strait said. “That being said, along our coast, the heavy rain combined with 1-2 feet of storm surge and an early morning high tide brings opens the door to somewhat more significant flooding.

The Lowcountry is expected see the most rain with up to 6 inches possible for some areas, according to forecasters.

The Midlands is expected to get between 2-4 inches, with the highest amounts in the Orangeburg area. Columbias should see between 1.5-2 inches of rain between Wednesday and Thursday, according to the National Weather Service – Columbia.

The Pee Dee, Midlands and Central Savannah River Area should see about 2-4 inches of rain, according to SCDNR.

Wind is also a concern from the Midlands to the Lowcountry, according to the S.C. Climate Office.

“Coastal areas will see wind gusts to around 50 mph during the height of the storm,” Strait said. “Peak gusts will be closer to 40 mph well away from the coast, and more like 30-35 mph in the Midlands. This is enough to cause some minor damage, especially near the coast.”

There is also a chance of isolated tornadoes along South Carolina’s coast from Wednesday night to Thursday morning, according to SCDNR.

“So, if you live along our coastal plain, make sure you have a way to be alerted to tornado warnings, have your weather radio or cell phone emergency alerts set up properly and the volume turned up loud enough to wake you up,” Strait said.

The good news is that Elsa should be out of South Carolina by late Thursday afternoon, according to forecasters.

“We expect Elsa to be trucking along and moving out of South Carolina during the midday hours of Thursday, so conditions improve quickly through this time,” Strait said. “Our typical July heat and humidity resumes Friday through the weekend with highs in the low to middle 90s and isolated pop-up afternoon thunderstorms each day.”

Here is the latest forecast for Charleston, South Carolina…


Here is the latest forecast for Columbia, South Carolina…