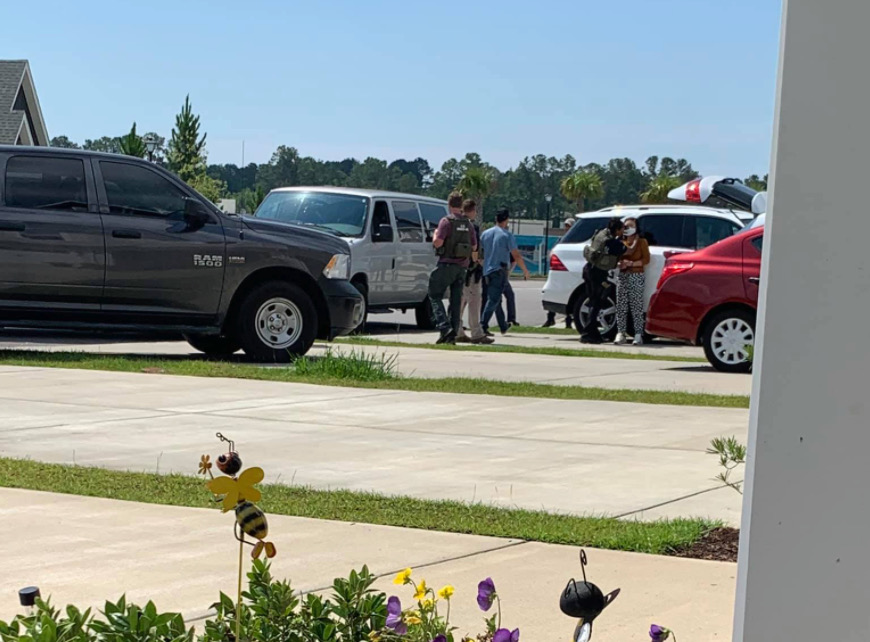 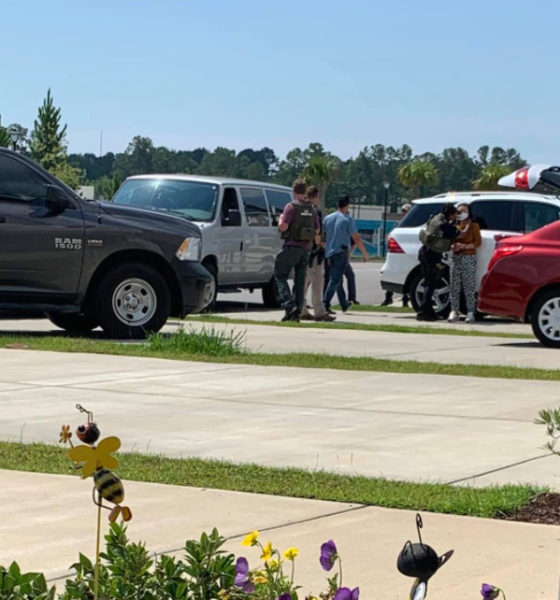 Agents affiliated with multiple law enforcement agencies descended on a suburban neighborhood in North Myrtle Beach, South Carolina on Wednesday – an event chronicled in detail on a social media post that has drawn the attention of federal agents. Three people were taken into custody in connection with this yet-to-be-explained raid, although it remains to be seen whether these individuals are suspects or victims in what appears to be a human trafficking sting.

Shortly after noon on Wednesday, June 16, 2021, Kelly Hopkins – a school teacher – was reportedly sitting on the rear patio of her home (accompanied by her boyfriend and her young daughters) when she saw a pair of U.S. Marshals with vests and weapons drawn approaching a home a few doors down the street.

“We live in a brand-new, rather nice retirement community,” Hopkins wrote, adding that a deluge of law enforcement was “not exactly what we’d imagine here.”

According to Hopkins, the Marshals were joined by agents of the U.S. Immigration and Customs Enforcement (ICE) division as well as officers of the Horry county police department.

What went down? As of this writing, all we know about the case is what Hopkins posted to social media …

“I was concerned, as we are neighbors, so I periodically checked,” Hopkins continued, referring to the activity taking place on her street. “It looked like there was something immigration related taking place.”

According to Hopkins, three women and one man resided at the home targeted by the officers. She described all of these residents as “pleasant, quiet, but friendly neighbors.”

“We watched as each woman was thoroughly searched, hair undone, jewelry removed, placed in cuffs, then shackled and placed in a silver van,” she wrote.

When things died down, one of the Marshals approached Hopkins to discuss what had transpired, she said. Hopkins asked him if “there was something going on with immigration.”

“No … actually, they have been running a really massive sex trafficking ring!” the Marshal told Hopkins, according to her Facebook post.

Hopkins then proceeded to provide law enforcement with information on the male resident of the home, who was not present at the time of the raid. Upon hearing this information, Hopkins said the faces of the agents “lit up.”

“He said ‘he was next,'” Hopkins said, referring to what the Marshal told her.


“It absolutely rocks my brain to think that my immediate reaction, feeling, and emotion towards the situation was that ‘I genuinely felt bad for them. They were nice people!’” Hopkins concluded. “Little did I ever realize (they were) Real Life MONSTERS making tons of money off the sex sales of young girls! My daughters play outside, yes, I’m usually always out with them, but there are times my oldest likes to ride her skateboard down our street/ out of my sight … and this was taking place and in full business a few doors down! My message to you all is, you can never be safe enough! It could only take one second and a child disappear, sex trafficking is everywhere … don’t think it can’t be right next door to you … I did, too! Be safe and cautious!”

The days of allowing one’s children to roam unsupervised in and around their neighborhoods without fear for their safety are, for all intents and purposes, over. Which is yet another sad commentary about life in our American dystopia.

So … what actually went down in Hopkins’ neighborhood?

All of the law enforcement and prosecutorial entities I contacted in connection with this raid referred me to ICE’s southeastern regional office for comment.