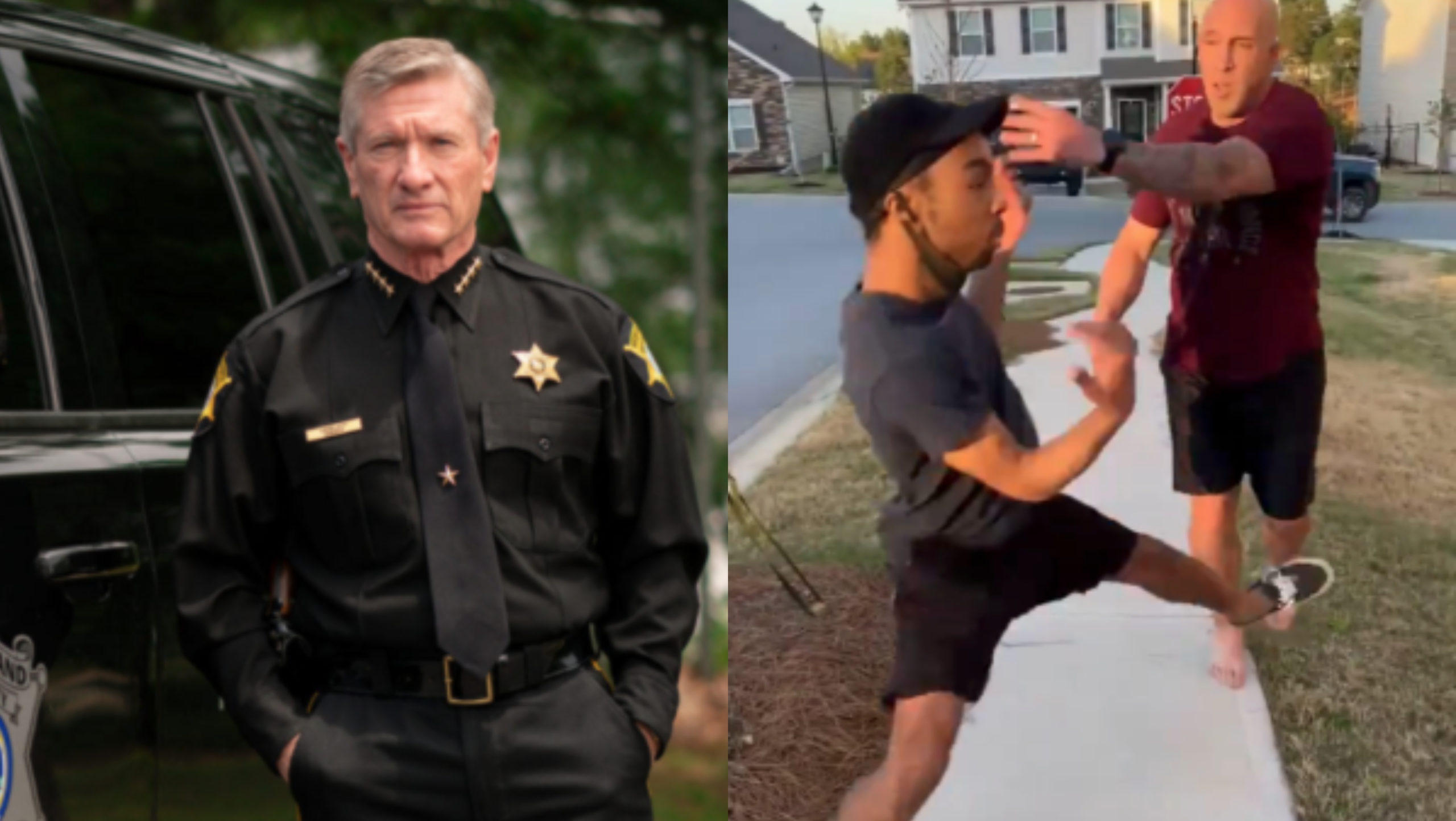 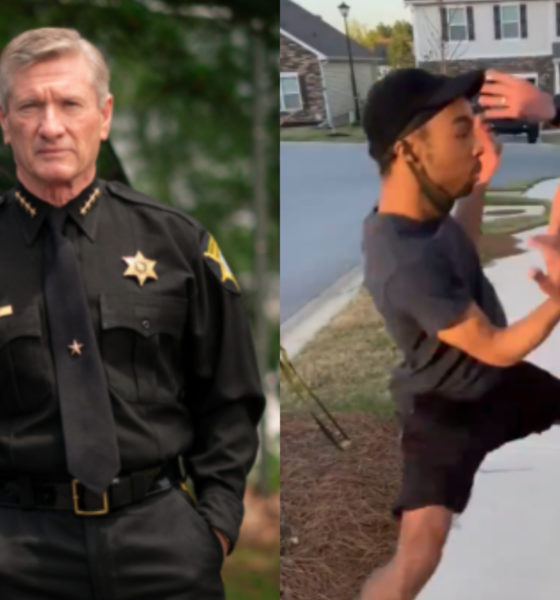 Since Lott was named ‘Sheriff of the Year’ by the National Sheriff’s Association in March, both the State Newspaper and the Post and Courier have published articles portraying the veteran law enforcement leader in a negative light — which is very rare.

Jonathan Pentland, a white Fort Jackson soldier who was caught on video assaulting an unidentified black man in a Columbia, South Carolina neighborhood on April 12, was arrested by Richland County Sheriff’s Department (RCSD) deputies two days after the incident.

But according to reporter Joseph Cranny of the Post and Courier, RCSD officials completely shifted their narrative from the time the incident was reported until after Pentland’s arrest… and they never explained why.


When reporters first questioned RCSD about the video, department officials issued two statements with incident reports that “suggested Pentland may have been a victim himself and added a vague reference to other earlier ‘assaults’ alleged to have occurred in the neighborhood,” the Post and Courier reported.

Those other incidents mentioned in the RCSD media release took place on April 8 and 10, but were reported only after the confrontation with Pentland on April 12, according to the Post and Courier.

Without investigating these claims, why would RCSD officers send a release essentially blaming the victim?

The next day, Lott’s response took an apparent 180-degree turn — with no explanation as to why.

Overnight, the video (below) of Pentland berating the black man went viral .

The video, showing Pentland screaming “You’re in the wrong neighborhood, motherf*cker,” and shoving a black man, enraged people across the nation and was viewed more than 1 million times within a few hours.

By the morning of April 14, hundreds of people were tweeting at the Richland County Sheriff’s Department asking why Pentland hadn’t been arrested.

On April 14,  Richland County Sheriff’s Department tweeted at 8:35 a.m that they were aware of the incident “and have taken this incident seriously.”

Nearly 9 hours later, Lott stood before the press and announced that Pentland was arrested at 8:30 a.m that morning — five before the sheriff’s department sent that confusing tweet.

Because Lott decided to keep the arrest secret all day, racial tensions escalated in those hours and protesters stormed the Summit neighborhood to demand justice.


In the press conference, Lott was clear in saying the black man was a victim in the case.

When a reporter asked Lott to speak about the events that led up to the altercation, he said “not really.”

“The things that occurred don’t really justify the actions of the suspect,” Lott said. “Other issues occurred but none of them justified the assault that occurred.”

When another reporter asked Lott why RCSD previously issued media incident reports about the black man and not about Pentland, the sheriff — who had all day to prepare for this press conference — appeared to be stumped.

“I have no idea what has been released,” Lott said.

The shift from victim blaming to Pentland shaming was confusing for people reacting to the video and only made things worse.

And if the sheriff’s office did investigate those claims about the black man made in the incident reports and found that they were false — why didn’t he use the press conference to explain that?

Why wouldn’t the ‘Sheriff Of the Year’ know exactly what information was released about a national news event in his jurisdiction?

When the Post and Courier asked Lott follow-up questions on the incident, he declined to answer.

For 25 years, Lott has served as the sheriff of Richland County, which includes the state capitol of Columbia, South Carolina. He’s beloved in Richland County and has recently gained national fame for his role on Live PD.

He’s the first South Carolina sheriff to be given the national Sheriff of the Year title — one of the highest awards in law enforcement.

Lott is also beloved by local media. He does a lot of press conferences. He’s a highly quotable smooth talker — and he’s rarely publicly criticized.

But in the past few years, several lawsuits have revealed a different side to RCSD.

Despite these complaints, Lott continued to allow Bradley to work as a school resource officer around teenagers in Richland County School District Two and Bradley’s predatory behavior escalated before he was fired and arrested for criminal sexual conduct in November 2019, according to recent court filings.

In the 2019 press conference announcing his arrest, Lott called Bradley “a monster that worked among us that we did not know about.”

But they did know about him. RCSD officials internally investigated and dismissed more than five reports alleging Bradley’s predatory behavior around teenage girls.

Lott is the only South Carolina law enforcement leader whose agency investigates its own officers accused of criminal activity (with the exception of SLED).

Last year, FITSNews was the first media outlet to report on a lawsuit that alleges two black teenagers were coerced into signing rape confessions then wrongfully jailed for month — even after DNA evidence proved their innocence (click link above for story).

That lawsuit has uncovered major problems within the Richland County Sheriff’s Department under Lott’s leadership — including racist texts allegedly sent by a senior investigator that Lott has never addressed.

In an October court filing, lawyers representing the two teenagers allege that there is “culture of misconduct and coverup” at RCSD.

“Its recent history of overlooking and covering up misconduct by deputies is well-documented in the public record,” plaintiffs’ attorneys wrote in the motion.

In August, FITSNews was the only news outlet to report on another alarming lawsuit against RCSD. Master deputy Kyle Oliver allegedly entered a home illegally and woke up a sleeping family at gunpoint over a traffic ticket.

Oliver was fired a few weeks later in a separate incident that Lott claimed to not know about. On Jan. 7 2020, Oliver was caught on video grabbing a woman by the hair and throwing her to the ground.

In September 2020 press conference, Lott claimed to have no knowledge of the incident until the week Oliver was fired and charged.

Considering all of these troubling incidents at RCSD, it begs the question — did Lott mislead the public about what he knew in the Summit neighborhood incident?

FITSNews will continue to keep a close eye on these lawsuits and RCSD. Stay tuned.