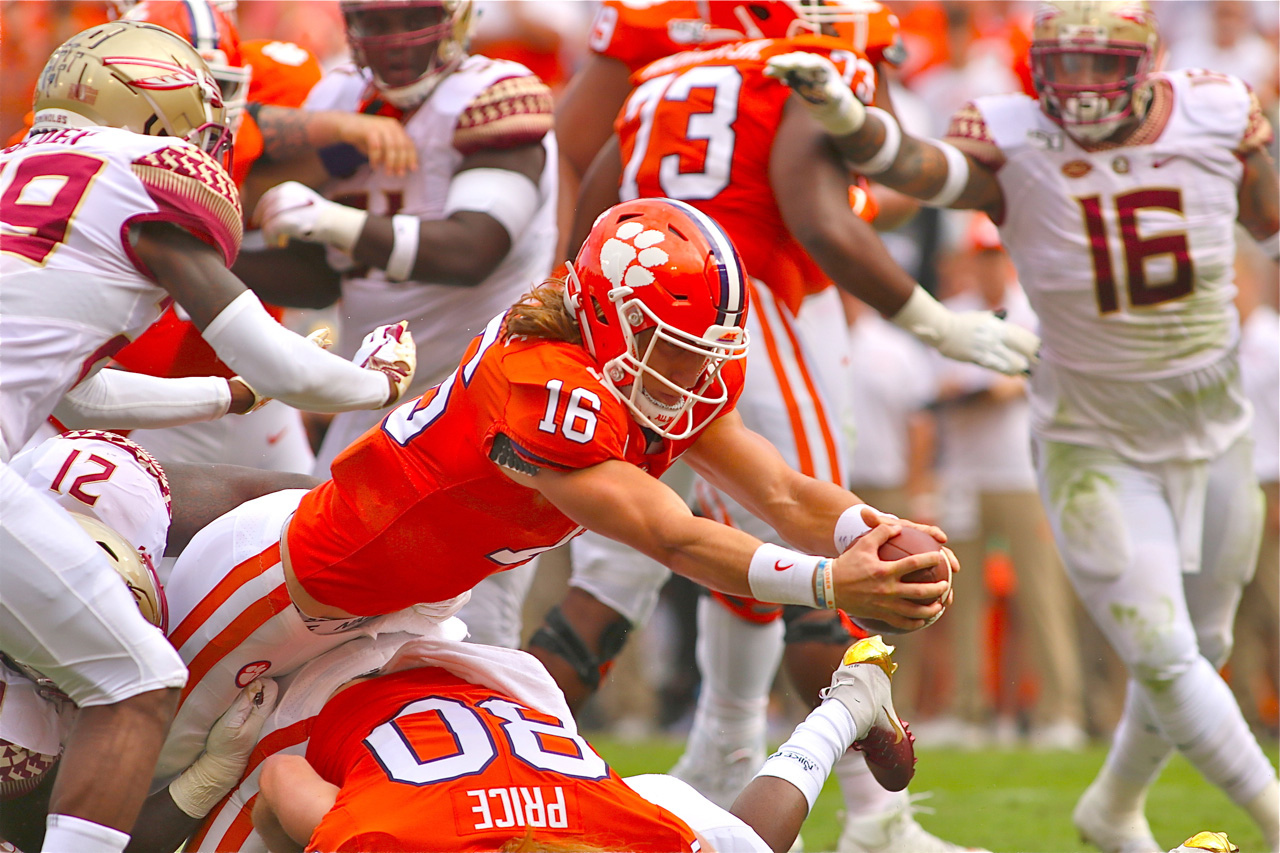 Rising junior quarterback Trevor Lawrence of Clemson University is likely going to be the No. 1 pick in the 2021 National Football League (NFL) draft … assuming he decides not to return to Tigertown for his senior season (he has two years of eligibility remaining headed into this season).

The 6-foot-6, 220-pound signal caller from Cartersville, Georgia had a sluggish start to the 2019 campaign, but he finished strong – including a monster performance in the national semi-final game against Ohio State.

Lawrence enters the upcoming 2020 college football campaign having completed 527 of 804 career passes (65.5 percent) for 6,945 yards with 66 touchdowns and 12 interceptions. He has also amassed 967 yards and 10 touchdowns on the ground in two seasons.

Size. Speed. Agility. Arm strength. Intelligence. Leadership (and all the other intangibles).

Lawrence is the total package … which is why it was such a coup when Clemson landed him out of high school.

Even if the Big 10 and PAC 12 were playing football in 2020 – which they aren’t – Lawrence would still be the consensus No. 1 overall pick in next year’s draft.

So … why is he trending on Twitter this week?

Well, Monday morning’s decision by the Jacksonville Jaguars to waive running back Leonard Fournette (a former No. 4 overall pick) has prompted speculation that the franchise is deliberately tanking the 2020 season to secure the top selection in the coming draft.

Fournette rushed for a career high 1,152 yards last season, and was expected to be the centerpiece of the team’s offense this year – the final year of his rookie contract.

Now he’s gone … which is being widely interpreted as the latest sign that the Jaguars want Lawrence.

“Jacksonville entered a full-blown rebuild once it traded defensive end Yannick Ngakoue to the Minnesota Vikings whether the organization is willing to admit its current direction or not,” noted Brent Sobleski for Bleacher Report only yesterday. “On paper, the Jaguars are the NFL’s worst team entering the ’20 campaign and best positioned to eventually claim the future top selection, thus securing a franchise quarterback prospect.”

Sobleski added that Lawrence was “the likely target, especially since the ACC is slated to play this fall while Ohio State’s Justin Fields may not have the opportunity to do so.”

And that was before the Fournette bombshell dropped …

Will Lawrence enter the NFL draft after his 2020 season, though?

A lot of Tigers have come out early in recent years, but plenty of other Clemson stars have experienced success in the NFL after exhausting their collegiate eligibility. Our guess is that may have motivated senior tailback Travis Etienne to return for his senior year despite being listed as high as No. 11 overall on some NFL draft boards.

The 5-foot-10, 210-pound native of Jennings, Louisiana is the back-to-back ACC player of the year and the conference’s career leader in rushing touchdowns – and his return is one reason Clemson enters the 2020 campaign ranked No. 1 nationally.