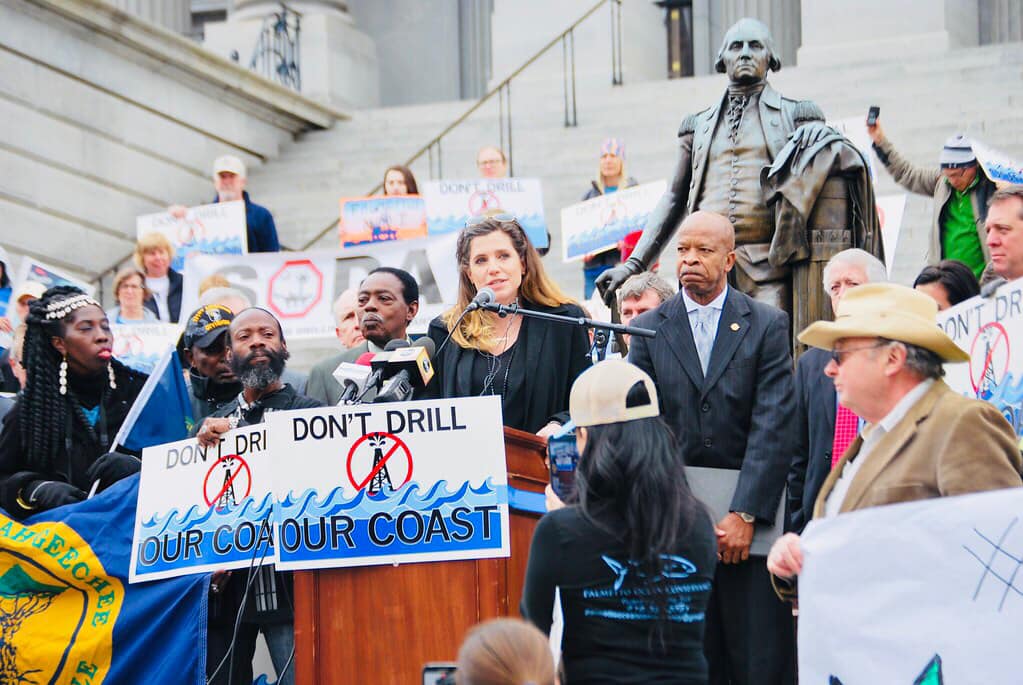 Last time we checked Mace and Cunningham were on the same side of this particular issue – to the extent it is even an issue. Offshore drilling (which we support, incidentally) has pretty much vanished from political radar screens given the extent to which already weak demand for oil plummeted further during the coronavirus pandemic.

Also given the unilateral opposition to drilling from South Carolina leaders of both parties … there is no way this issue is going to gain traction anytime soon (although again, we believe it is prudent to conduct testing to determine the potential resources available).

Despite all this, 314 Action is blasting Mace in its new ad, entitled “Footsteps.”

“No matter how hard she tries, Nancy Mace can’t cover her tracks on offshore drilling,” the ad’s narrator states as a pair of attractive female legs are seen walking on a beach, leaving oily footprints in their wake.

The ad goes on to accuse Mace of opposing a proposed federal ban on offshore drilling, and of taking “tens of thousands of dollars from oil companies.”

The ads were reportedly ordered prior to Mace’s stronger-than-expected GOP primary win last week … and lend credence to the theory that the Democratic incumbent has a fight on his hands this fall.

“It’s no surprise that the special interest DC money that poured in millions for Joe on TV in 2018 are, you guessed it, back again just hours after Nancy’s blowout victory to spew lies and falsehoods about Nancy’s record,” Mace’s campaign manager Mara Mellstrom told us. “They are terrified of Nancy: Daughter of the Lowcountry, fiscal conservative and businesswoman with a 98 percent lifetime rating from the Conservation Voters of SC.”

What does Cunningham – an ostensible “ocean engineer” – think of the ads?

Over the last few weeks, this news outlet has made repeated efforts to reach out to Cunningham, his press office as well as his top strategist Tyler Jones – seeking to incorporate their perspectives into our coverage.

None of them have responded to us …

Late last week, our founding editor Will Folks reached out to Cunningham directly via a text message.

“As the general election is now upon us, I want to open my microphone to you again and try to incorporate your perspective into our coverage,” he wrote. “If you are not interested, that’s fine. I just wanted to make sure the offer was on the table.”

Despite this silent treatment, our microphone remains open to Cunningham and his supporters at any time …

Cunningham captured this seat in 2018 thanks in no small part to former U.S. congressman Mark Sanford – who represented the first district from 1995 to 2001 and again from 2013 to 2019. Sanford’s refusal to endorse GOP nominee Katie Arrington two years ago after she defeated him in the Republican primary divided the GOP base – while Cunningham was able to successfully position himself as a moderate centrist.

Mace is hoping to recapture the seat for Republicans, who held it for nearly forty years prior to Cunningham’s upset win.

The SC Senate Republican Caucus Is Back … With A New Name