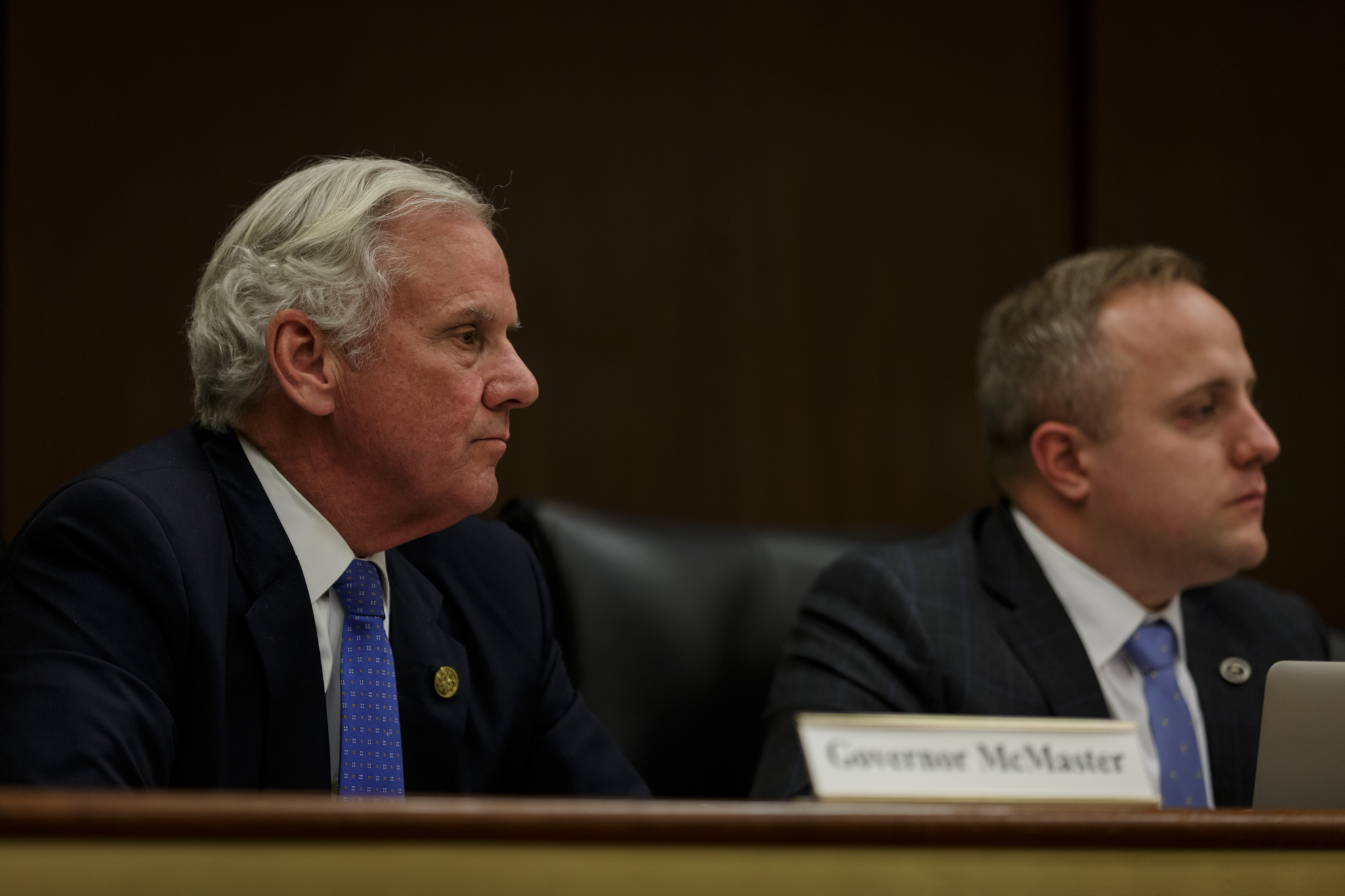 by RICHARD MOORE || One by one the dominoes fell this past week, as governor after governor declared stay-at-home orders, with even die-hard holdouts like Missouri and Alabama finally caving in.

By Sunday morning – as of this writing – only eight states, including South Carolina, have failed to follow suit. Whatever else one may think of Gov. Henry McMaster’s administration, give it credit for standing up for the constitution on this one, at least so far.

In an article in Saturday’s The Post and Courier, Andy Shain relayed the administration’s thinking by way of McMaster’s chief of staff, Trey Walker: “Yes, he could go out and say, ‘I order you by criminal penalty to stay home.’ But the problem is he does not believe that any governor or any public official has the constitutional authority to force someone to stay inside their home against their will.”

I am well aware of the frustrations with both Walker and McMaster, but that thinking is exactly right. No governor, not McMaster and not any other governor, has the authority to restrict the free movement of the American people, no matter whether it is wise for them to move about or not.  McMaster left open the possibility that he would change his mind – nonsensical because the constitution isn’t going to change by whatever day he changes his mind, if he does – but as of Sunday he had it right.

In his article, Shain displayed the usual and spectacular ignorance of the liberal press, characterizing the governor’s position as a “stubborn legal view” because, you know, to McMaster a “rule is a rule.” In other words, Shain is arguing that the constitution is just a rule like any other, and refusing to dispense with it when times are tough is just plain stubborn, and, presumably, dumb.

Nothing could be further from the truth. The fact is, adhering to the constitution not only preserves our liberties but, in this instance, it would allow us to entertain all but the most totalitarian public health choices before us.

A comparison is in order to make the points. I am South Carolina-born, and I own property and pay taxes in Colleton County, but I also work as a journalist for a conservative newspaper in Wisconsin. Let me tell you, I’d trade Democratic governor Tony Evers for McMaster in a heartbeat.

In Wisconsin, Evers (above) has issued a draconian stay-at-home order under the statutory emergency powers he has — statutes I think are unconstitutional. Among other things, he has closed churches, a fundamental suspension of both federal and state guarantees of religious liberty.

The U.S. Constitution demands that “Congress shall make no law …. prohibiting the free exercise [of religion]” a right reinforced in the Wisconsin constitution, and yet Evers suspended it.

Evers’s order goes further, prohibiting private gatherings in private homes. I live in remote northern Wisconsin, far away from the hot spot of Milwaukee, yet I am forbidden to even have my neighbors over for dinner. In Wisconsin, we are in effect under house arrest, for our own good, we are told. In this case, the government reassures us, it is OK to suspend the constitution.

Refreshingly, Wisconsin Supreme Court justice Rebecca Bradley has contested this nonsense. In a case in which the high court upheld the state’s suspension of court activity during the state of emergency, Bradley — a rising libertarian beacon of light — vociferously dissented, saying the Sixth Amendment right to a speedy trial should not be suspended.

Hers are words that should be read by every American, not just Wisconsinites. In that dissent, Bradley wrote that the constitution does not countenance an infringement of rights during an emergency.

“Emergency does not create power,” she wrote. “… The constitution was adopted in a period of grave emergency. Its grants of power to the federal government and its limitations of the power of the states were determined in the light of emergency, and they are not altered by emergency.”

The Sixth Amendment to the United States Constitution commands that in all criminal prosecutions, the accused shall enjoy the right to a speedy trial, Bradley wrote.

Bradley (above) is right that the suspension of one right is effectively the ability to suspend all constitutional rights and sets a dangerous precedent. One cannot carve out exemptions, such as the freedom to gather to worship or act politically, while suspending the right of free movement for all other purposes. Though “travel” is never mentioned in the federal constitution, as the court noted in U.S. v. Guest in 1966,  “the freedom to travel throughout the United States has long been recognized as a basic right under the Constitution.”

And in a multitude of decisions. Even a dissent in the Guest case acknowledged a constitutional right to travel that “oppressive state action” could not undermine. The state can reasonably regulate, and even assert highway privileges, but it cannot take away that right.

But that’s exactly what legal prohibitions on sleepovers and inviting neighbors to dinner – prohibiting all private gathering in private settings, which is the aim of stay-at-home orders – accomplishes.

This is even truer in times of emergencies. Robert Higgs long ago warned us, and it has come to pass, that a genuine “return to normalcy” is unlikely after a crisis has provoked an expansion of the scope of governmental powers. The government is loathe to give up any power it obtains at any time. Indeed, as Wisconsin justice Bradley wrote, the constitution, informed by the lessons of history, was established to safeguard the rights of the people even under the most exigent circumstances.

“Nothing in the constitution permits the judiciary to limit the fundamental rights secured under the Sixth Amendment,” she wrote. “If the framers had contemplated suspension of Sixth Amendment rights or any other liberties, they would have said so in the text.”

In sum, Bradley wrote, justifying the suspension of the people’s constitutionally guaranteed rights based on a public health emergency nullifies our constitution, and, if allowed, it means that the lives of so many soldiers who fought and died for our liberty were lost in vain.

“If the people’s constitutional rights may be suspended by the judicial branch in the name of a public health emergency, our freedom is in peril; our republic is lost,” she wrote. “More than one million Americans have died defending our liberty from external threats. The liberty for which so many have laid down their lives should not be cast aside even in ‘troublous times.’ If the government will not protect constitutional rights designed to preserve our freedom, it is up to the people to reclaim them.”

The brilliance of our constitution is that, by safeguarding our rights of free movement and assembly and speech, even in times of emergency, we preserve those “laboratories of deliberation and debate” that help fashion the best course forward rather than merely opting for the desired outcome of those who possess absolute power. Because, as it turns out, totalitarianism is flawed in its logic and blind to any mission other than the possession of power.

For instance, as in South Carolina, we in Wisconsin are free to travel about to shop at essential businesses, as deemed so by the government. Those categorizations are purely arbitrary government exemptions, and small businesses not on the government’s good side are being sledgehammered to death.

Yesterday, on a walk, which is itself an increasingly subversive activity, I walked by a shopping center. It was full of cars. In the shopping center there is a grocery store, a paint store, a Dollar Tree, a Verizon store, and a furniture store. Every business was open and deemed essential except the furniture store. It was shuttered, yet there were all those people interacting in the parking lot and in the other stores.

I had to wonder, just what was so essential in that Dollar Tree? By what logic must the furniture store be closed when the whole shopping center was still an open carnival of germs?

What’s more, while supporters of lockdowns argue that the orders can pass constitutional muster because of “strict scrutiny,” that is anything but the case. It might pass the first criteria (is it aimed at advancing a compelling government interest?) and arguably even the second (is it narrowly tailored to that interest?), but it clearly fails to pass the third necessary element, that it must be the least restrictive means of advancing that interest.

By no stretch of anyone’s imagination is the complete suspension of the constitutional rights of all citizens the least restrictive way of stopping this pandemic. Just the opposite. Taken as a first choice, it forecloses on dialogue and deliberations about other strategies, such as focusing on at-risk population groups and directing resources and education toward protecting them. It ignores that such house arrests might in the end be futile because stay-at-home orders will do nothing to prevent a second wave, as the article in FITSNews addressed this weekend. It ignores debate that economic devastation may well destroy more lives than the virus.

It chooses power in the first instance as the mission, and rolls the dice that might makes right.

None of this is to say the government cannot take a targeted, laser-like approach to aggressive testing, and measures to protect vulnerable populations, such as restricting nursing home visits and other similar measures, so long as due process is in every instance preserved.
But sweeping constitutional suspensions of rights are self-defeating. Trading individual liberty for collective security is always a false choice because those offering collective security are by human definition, once they are ceded the peoples’ rightful power, concerned ultimately only about their own security.

Right now, in most of the nation, we have shut down our constitutions so that the elite experts can work without annoying democratic restraints. Never mind that elite experts are often wrong. A better way is to allow the constitution to work, and to let a free people take responsibility for our nation’s health, through the deliberation and debate of scientific choices grounded in due process, and then putting those scientific options in play and putting the government to work educating about what the people find.

Last week, Gov. McMaster put it this way: “We are not ordering people to stay at home, but from the very beginning we’ve been telling people to stay home.” McMaster was exactly right, and he and South Carolina should stay the course.

Richard Moore is a senior investigative reporter with The Lakeland Times in Minocqua, Wisconsin, and a native and taxpayer in Colleton County, South Carolina.