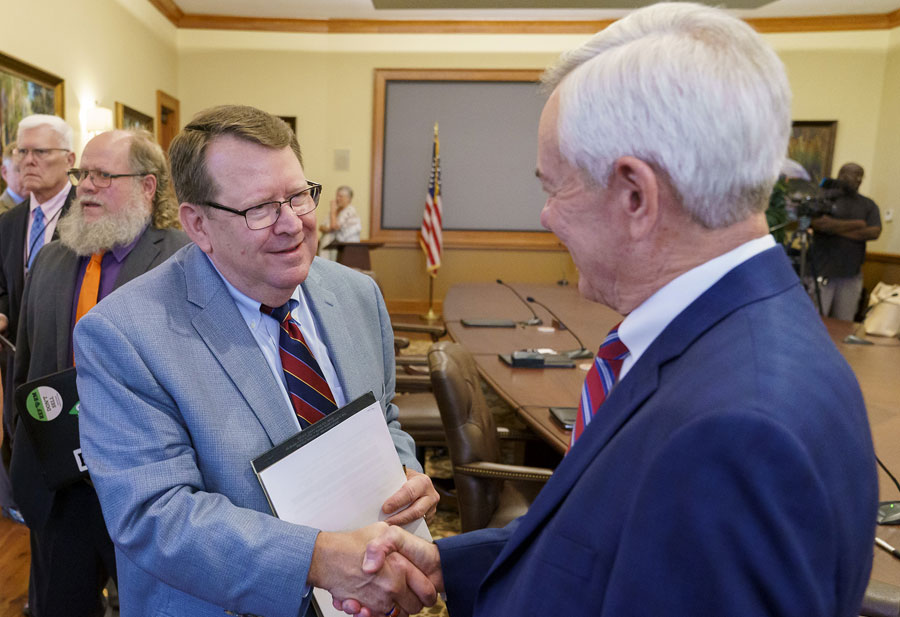 Defying a state law that prohibits it from propagandizing in connection with its uncertain future, South Carolina’s government-run utility is spinning harder than ever after Hurricane Dorian … ramping up a public relations blitz aimed at staving off its sale to the private sector.

Even worse? The latest installment of Santee Cooper’s misinformation campaign comes at a time when hundreds of its customers remained without power after Dorian brushed the Palmetto State’s coastline as a category three hurricane last week.

“Our customers matter,” the state-owned utility’s website blared on the Sunday after the storm.

Really? Could have fooled us …

If that’s true, then why did Santee Cooper lie to them (and everyone) about the status of a spectacularly failed command economic experiment (#NukeGate) that plunged the utility billions of dollars in the red?

And why did it continue raising rates on customers to pay for this project even after its leaders knew it was going to fail?

And why did it give the former chief executive officer responsible for this $10 billion debacle a golden parachute and subsidize his criminal defense representation (while simultaneously suing to continue raising rates on customers)?

And why is it continuing to pump additional ratepayer money into dubious “economic development” schemes even as its fiscal position continues to deteriorate?

Also … why is Santee Cooper still spinning its web?

State lawmakers explicitly warned its leaders they were violating a state law intended to govern negotiations over its possible sale … why are they now tripling down on their extra-legal negotiations?

The latest machinations by Santee Cooper provide us with even more evidence that this agency has gone rogue. Completely. And not only that, these machinations would seem to indicate the embattled government bureaucracy has enlisted the help of a co-conspirator – Atlanta, Georgia’s Southern Company – in its bid to poison the well for state lawmakers tasked with deciding whether to sell Santee Cooper, turn it over to a private sector manager or allow it to “reform” itself.

As we noted last week, Santee Cooper’s offline negotiations with Southern are intended to “chill the marketplace” and “foment uncertainty (and potentially create additional debt obligations)” for any potential suitors.

They are precisely the sort of secretive discussions we editorialized against at the beginning of this process.

That makes this week’s big vote by Santee Cooper’s board (scheduled for 2:00 p.m. EDT on Monday in Pinopolis, S.C.) so important …

If Santee Cooper’s board members endorse the agency’s rogue actions at this meeting, they would be explicitly defying the administration of governor Henry McMaster – whose Department of Administration (SCDOA) has repeatedly warned the utility to stop meddling in such negotiations.

Such an action would put McMaster – who appoints all of Santee Cooper’s board – in an incredibly difficult position.

Specifically, what does he do if his own appointees defy his cabinet agency?

Board approval of the rogue negotiations between Santee and Southern would also explicitly defy the will of state lawmakers, who are probably now realizing they should have never attempted to keep this process under wraps in the first place.

Particularly, it would represent yet another high-profile rebuke of powerful state senator Hugh Leatherman – who has advocated for McMaster to remove any board members who disobey his administration’s orders.

We rarely find ourselves on the same side of an issue as Leatherman (above), but in this case we support his position. So do the vast majority of pro-free market members of the S.C. General Assembly (many of whom have, like us, advocated for many years on behalf of the sale of Santee Cooper).

Also worth considering is this: What did Santee Cooper tell the network of electric cooperatives who rely on the utility to generate power?

According to our sources, the cooperatives were caught completely off-guard when the Santee Cooper-Southern bombshell hit last week during the hurricane. Which would mean they knew nothing of the utility’s plans to try and backdoor a deal with Southern.

In an article published by Andy Brown of The (Charleston, S.C.) Post and Courier on Saturday, the chairman of the largest of these cooperatives blasted Santee Cooper’s negotiations with Southern as “undermining the fairness” of the process agreed upon by lawmakers – referring to it as “the most damaging thing a participant could do.”

Stay tuned … Monday is obviously going to be a huge day in the ongoing Santee Cooper saga. Will the board defy the governor and the legislature? And if it does, how will McMaster, Leatherman et. al. respond?

Horry County: Another Educrat In Trouble

The Heather Elvis Case: Arrests Made