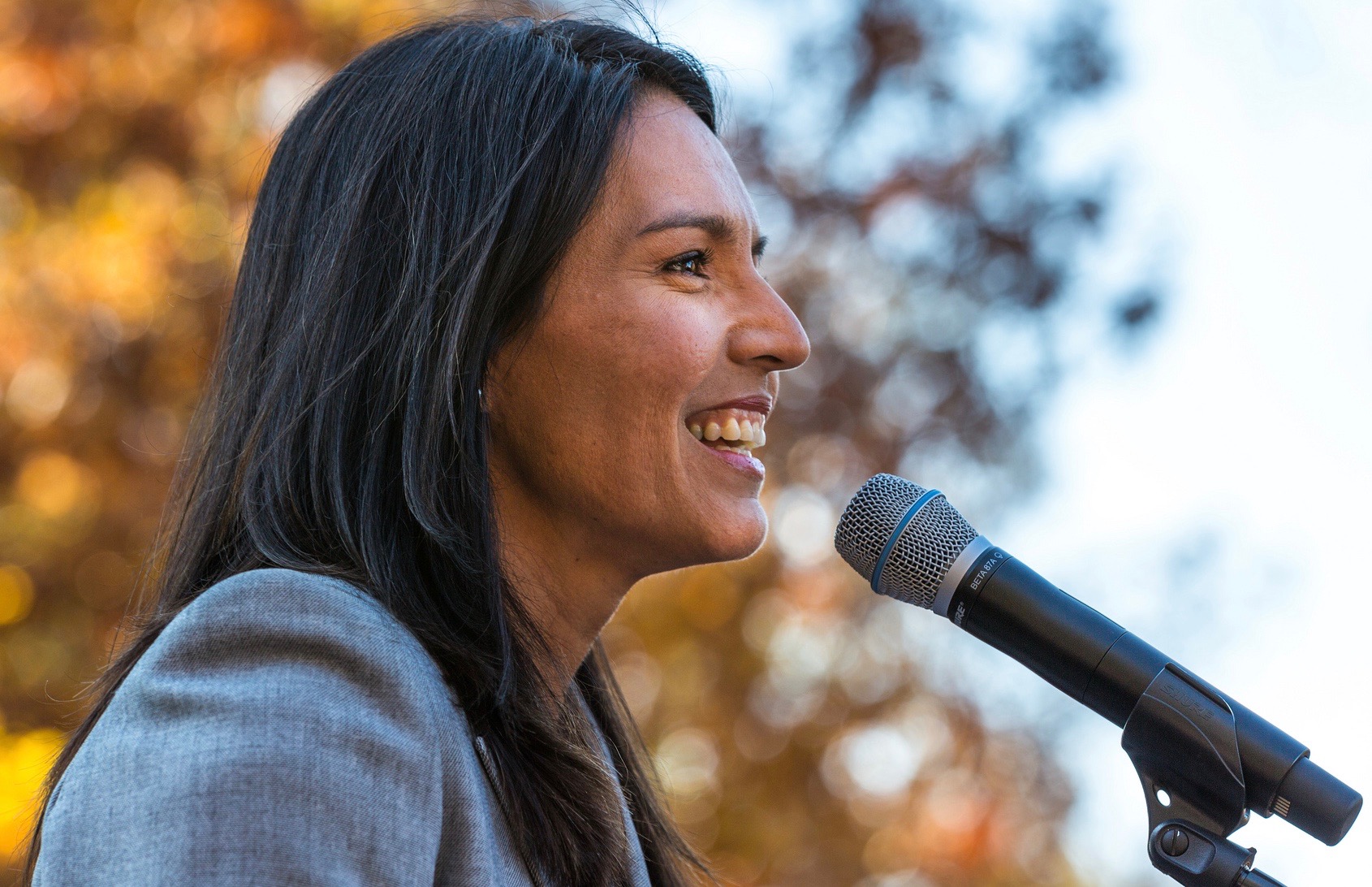 This news outlet has written somewhat favorably on the presidential candidacy of U.S. congresswoman Tulsi Gabbard of Hawai’i.

To be clear: We have no intention of endorsing Gabbard (or any of the other liberal politicians seeking the 2020 Democratic presidential nomination), however we do find her opposition to needless American military intervention around the globe to be quite refreshing.  In fact, we wish more politicians in both major parties were so clear-minded about our Republic’s inability to squander any more of its blood and treasure on military engagements that lack a clear and compelling national security objective.

Whatever your view on the subject, though, we believe Gabbard – a major in the Hawai’i Army National Guard who once surrendered her state legislative seat to serve in Iraq – has an eminently credible perspective to share on these matters.  Agree or disagree, she has certainly earned a seat at the table.

Not everyone feels the same way, apparently …

While Gabbard will likely struggle to break into the top tier of Democratic presidential hopefuls, she already finds herself under attack from the corrupt Democratic party establishment – which she has challenged in the past – and its mainstream media attack dogs.

Last week, Politico ran a story about how Gabbard’s nascent 2020 campaign was already in “disarray.”

“Tulsi Gabbard’s presidential campaign hasn’t officially launched yet but it’s already melting down,” Daniel Strauss and Alex Thompson opined in their “report,” adding that the 37-year-old surfer girl-turned-soldier “has struggled to contain the chaos.”

Well, Strauss and Thompson hung their hats on the fact that Gabbard’s top staffer announced her departure from the newly minted presidential campaign shortly after it was launched, a move which – according to them – “(called) into question whether the Hawaii lawmaker can compete on the national stage.”

Of course this mountain-from-mole hill “hit piece” was followed up by something far more insidious – and far more revealing about the depths to which the Democratic establishment (and its media and deep state allies) will go in an effort to destroy candidates who do not conform to the warmongering status quo.

According to Windrem and Popken, “experts who track websites and social media linked to Russia have seen stirrings of a possible campaign of support for Hawaii Democrat Tulsi Gabbard.”

“The Russian propaganda machine that tried to influence the 2016 U.S. election is now promoting the presidential aspirations of a controversial Hawaii Democrat,” the report concluded.

This story – which predictably went viral within the Democratic base – did significant damage to Gabbard.  Several Democratic operatives active in South Carolina – the early-voting state which hosts the 2020 “First in the South” presidential primary – reached out to us with warnings that the Democrat we were “supporting” was a Russian agent.

Is any of it true?

According to Glenn Greenwald of The Intercept, “the whole story was a sham.”

Specifically, Greenwald noted that the only “experts” cited by NBC were recently exposed by The New York Times for “fabricating Russian troll accounts on behalf of the Democratic Party in the Alabama Senate race to manufacture false accusations that the Kremlin was interfering in that election.”

That’s right … Democrats faked Russian troll accounts to imply that the Kremlin was backing a Republican candidate for the U.S. Senate.

Allegedly orchestrating the scheme?  A company called New Knowledge and its CEO Jonathon Morgan – who according to Greenwald pretended to be an impartial “expert” commenting on information he was knowingly manipulating behind the scenes.

That fraud was overseen by New Knowledge’s CEO, Jonathon Morgan. At the same time Morgan was fabricating Russian troll accounts and using them to create a fraudulent appearance that (Vladimir) Putin was trying to defeat the Democratic Senate candidate, he was exploiting his social media “expertise” to claim that Russians were interfering in the Alabama Senate election. In other words, Morgan used his own fake Russian accounts to lie to the public and deceive the national media into believing that Kremlin-linked accounts were trying to defeat the Democratic Senate candidate when, in fact, the accounts he was citing were ones he himself had fabricated and controlled.

In light of this information, Greenwald condemned NBC’s “inflammatory, sensationalistic, McCarthyite storyline that Gabbard’s candidacy is supported by the Kremlin.”

“To accomplish this McCarthyite goal, this Democratic Party coalition of neocons, intelligence operatives and NBC stars will deceive, smear and even engage in outright journalistic deception, as NBC (once again) just proved with this report,” he concluded.

We agree with Greenwald … 100 percent.

Ultimately, though, this story isn’t about a presidential candidate.  Or a political party.  Or even where a candidate or a party stand on a particular issue.

It is much bigger than that …

This story is about the battle for truth.

Stand for truth?  You get attacked – even if you are a second-tier presidential candidate with little chance of breaking into the top tier.

Stand for the lies?  Easy: The world is yours …

UPDATE – Gabbard has tweeted on the issue, slamming the “journalistic fraud (used) to discredit our campaign.”  She added, “as commander-in-chief, I will work to end the new cold war, nuclear arms race and slide into nuclear war. That is why the neocon/ neolib warmongers will do anything to stop me.”

Got something you’d like to say in response to one of our stories? Please feel free to submit your own guest column or letter to the editor via-email HERE. Got a tip for us? CLICK HERE. Got a technical question or a glitch to report? CLICK HERE. Want to support what we’re doing? SUBSCRIBE HERE.
Banner: Lorie Shaull/ Flickr