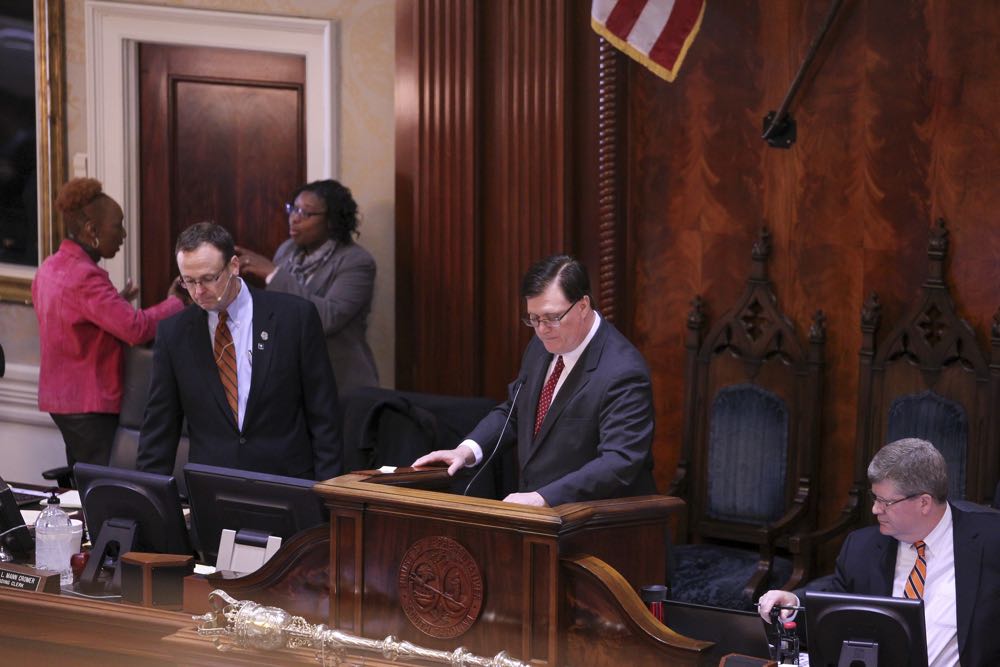 The spectacular failure of crony capitalist energy provider SCANA and state-owned Santee Cooper regarding the botched construction of a nuclear power plant in Fairfield County, South Carolina has been well documented by this news site and other media outlets.

And while we don’t know how #NukeGate will end (at all), we do know S.C. speaker of the House Jay Lucas is getting high marks from those within his chamber for his handling of the situation.

“He has put political considerations aside and honestly tried to do what is best for the South Carolina’s citizens and ratepayers,” one freshman lawmaker told us.

Another veteran legislator praised Lucas for “letting the right voices” weigh in on the matter, an acknowledgment that many of the politicians clamoring for reform were among those responsible for creating the problem in the first place.

The #NukeGate drama has highlighted Lucas’ long-standing belief that talent – not influence or seniority – should be the determining factor in deciding which legislators are assigned to address the pressing issues of the day.

To wit: In a major shakeup reported exclusively by this news site last fall, Lucas appointed state representative Peter McCoy of Charleston to handle the deluge of proposed legislation accompanying the nuclear debacle.  This decision marked a huge demotion for influential legislative veteran Bill Sandifer, whose labor commerce and industry committee ordinarily would have been in charge of holding hearings related to these bills.  Lucas, however, realized Sandifer was hopelessly conflicted on this issue – and that McCoy was better equipped to handle the process.

This is how Lucas has operated since taking the gavel in late 2014.  Whether dealing with sexual harassment issues, indictments of members, pension reform, the Confederate flag debate … he has developed a reputation for taking swift and decisive action.

To be clear: We don’t always (or even often) agree with Lucas on policy matters.  As far as we can tell, he’s embraced plenty of status quo “solutions” – a.k.a. additional taxing, borrowing and spending on a government that produces abysmal outcomes economically, fiscally, educationally and with regards to infrastructure, public safety and other core functions of government.

But Lucas has at least been honest about where he’s coming from … and consistent in his advocacy.  And unlike other legislative leaders, he isn’t dipping his hand into the trough to enrich himself or his business interests.

Lucas’ rise in the House has come as the State Senate – once viewed as the more deliberate half of the S.C. General Assembly – has descended into chaos.  In fact many State House observers have noted how the two chambers have switched roles in recent years.

“The Senate has always considered itself a deliberative body, but lately, it has become a body that passes very few bills and has had a difficult time even debating substantive bills,” one lobbyist told us.  “Under previous speakers, the House was compared to a race track where bills were often pushed through even though many knew there were significant flaws or problems. The saying in the lobby was, ‘we can fix it in the Senate.'”

That’s not the case anymore.  Under Lucas’ leadership, the House is passing better-researched, better-conceptualized legislation while the Senate descends further into chaos.  And while we may rarely agree with what the House churns out, they are at least laying their cards onto the table.

Take the gas tax bill, for example.  While we emphatically disagreed with this measure, House members at least had the constitutional clarity to pass a clean version of the tax hike.  The Senate?  Its leaders took the House legislation and added a host of unrelated items in an effort to get the bill across the finish line.

The problem with these add-ons?  Their inclusion in the legislation violated a constitutional mandate requiring bills to relate to “but one subject” – thus enabling our founding editor Will Folks to file a lawsuit against the gas tax challenging its constitutionality.

He’s probably going to win that suit, too …

“They didn’t fix it in the Senate, did they?” one House member told us half-jokingly.

We’re hoping to reach out to legislative leaders like Lucas in the weeks ahead as these debates pick up steam.  Again, we don’t expect to always (or often) agree with them – but we do believe it’s important to get their perspectives in the mix as we continue our unique brand of activist journalism.

#SCStateHouse: The War Against Brian White Is Heating Up